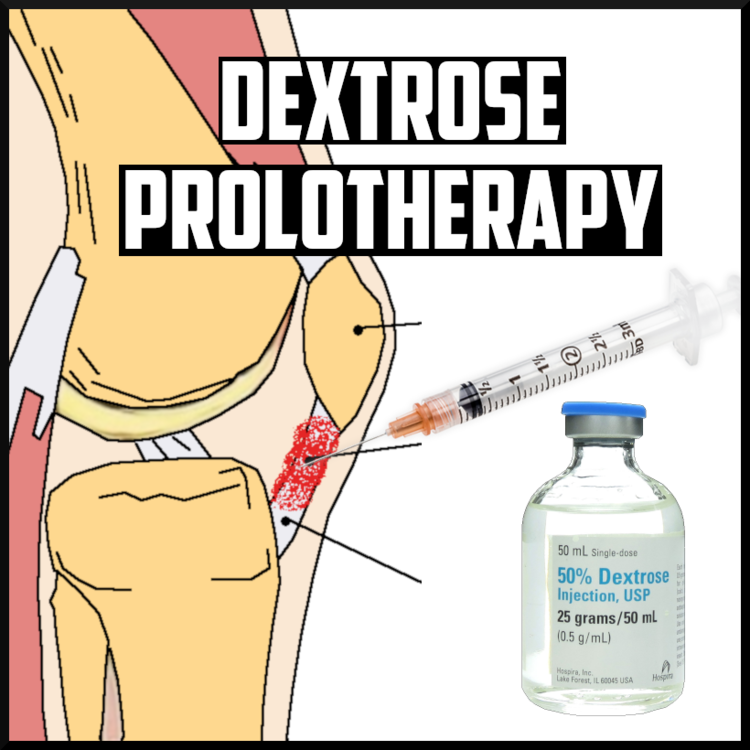 A Review of Dextrose Prolotherapy and Clinically-based Evidence for Usage

Prolotherapy, originally termed sclerotherapy, is a technique that has been around the medical community for many years. The first recorded usage in humans occurring as early as 400 BC by Hippocrates. Hippocrates was reported to utilize a hot poker in the axilla for treatment of pain associated with a dislocated shoulder. Years later, a physician by the name of Alfred Velpaeu successfully improved pain from a hernia by injection with iodine (Velpaeu, 1847). However, it was not until the early 1930’s that conventional prolotherapy was discovered. This occured after a physician by the name of Earl Gedney sustained a ligamentous injury to his thumb that was thought to end his surgical career. In 1937, Dr. Gedney wrote the pioneering article reviewing two successful case studies involving a knee and low back “irritant” injections (Gedney, 1938). Into the 1980’s, Dr. Hackett and Dr. Liu et al utilized dextrose as the main irritant. Dr. Hackett, considered the father of current day prolotherapy, is credited with proposing the three stages of prolotherapy: inflammation, granulation or proliferation, and maturation (Anderson, 2015).

Biological Explanation. Prolotherapy involves injecting an irritant sometimes accompanied with a needle tenotomy into a previously damaged muscle or tendon. Prolotherapy involves a wide array of injectates with dextrose being the most common. Other injectates discussed in the literature include the following: ozone, hypertonic normal saline, phenol, zinc, manganese, bone marrow stem cells, and adipose-derived stem cells (Hauser, 2016).  Typically, this is performed on tissue that demonstrates chronic changes via ultrasound from improper healing of their injury or tendinopathies refractory to other therapy. Most studies evaluating prolotherapy have used a concentration ranging from 12.5% to 25% of dextrose injectate (Distel, 2011). It has been suggested that at least 10% is needed to create an inflammatory process; concentrations less than 10% are thought to be non-inflammatory (Reeves, Fulerton et al 2000). The greatest therapeutic benefit in patients is likely those with chronic tendinopathies involving neovascularization, an ultrasonographic finding of increased vascular markings in musculotendinous portion of the tendon which is normally a poorly vascularized tissue (Khan et al 1999) (Peacock et al 1959).  A study in 2018 noted benefit with usage in contused muscles of mice (Tsai, 2018). In this same study, Tsai et al showed decreased LDH, CK, and macrophage proliferation as well as increased muscle satellite regeneration. In vitro studies by Creaney et al and Reeves et al have shown that human fibroblasts and chondrocytes proliferate and form both Type One and Three collagen with as small as 0.5% dextrose solution (Reeves 2000) (Creaney 2008). Other factors shown to be activated by dextrose are transforming growth factor beta, epidermal growth factor, insulin like growth factor, and connective tissue growth factor  (Fukuda et al 1997; Woo et al 1999; Tang et al 2003; Pugiliese G et al 1996; Reeves et al 2008; Vora et al 2013).

Image 1. Graphical illustration of the healing timeline after prolotherapy (courtesy of goldcoastosteopathic.com.au)

In the first stage of prolotherapy, the injectate creates the inflammatory response. The goal of the procedure is to cause an area of inflammation within the pathologic tissue and bleeding into the area of injury. This leads to a cytokine cascade and chemotaxis of inflammatory cells including macrophages, platelets, TGF, and growth factors. This stage typically last 3-7 days (Anderson, 2015). The second stage of prolotherapy is known as the proliferation stage. This stage begins 72 hours post injection and lasts till approximately 6 weeks. The defining features of this stage are an increase in myofibroblasts, fibroblasts, and endothelial cells at the site of injection. These cells facilitate the formation of type 1 and type 3 collagen. During this period of time patients can start to see some improvements in pain and function; however, it is important for patients to not overwork the area as they are at increased risk for injury (Anderson 2015). The final stage, or maturation stage, lasts from six weeks post-injection to many months or even one year after injection. Type 1 and type 3 collagen links continue to strengthen to a more “normal” level coupled with a tailored physical therapy regimen. It is this formation of new, stronger, and more physiologically normal tissue that represents the fundamental goal of prolotherapy. This is what is thought to cause the clinical improvement seen in patients who have undergone the procedure (Anderson, 2015).
The evidence. The majority of research investigating dextrose prolotherapy revolves around the treatment of chronic tendinopathies. Studies have investigated a variety of tendinopathies including lateral epicondylitis, achilles tendinopathy, patellar tendinopathy, and rotator cuff tendinopathy as well as plantar fasciitis. High quality studies evaluating prolotherapy are lacking. The best available studies performed in the past had inconsistent patient follow up; however, a few trends can be ascertained from reviewing the current data. When combined with physical therapy, dextrose prolotherapy resulted in better pain control and satisfaction for chronic rotator cuff tendinopathy compared to physical therapy alone or injection with saline (Bertrand et al). When treating rotator cuff tendinopathy, Lin et al showed limited benefit in VAS (visual analog scores) lasting only two weeks (Lin, 2018). Kim et al showed equivalent effects  on decreased pain and disability when comparing dextrose prolotherapy and prp injection for plantar fasciitis (Kim, 2014).
There are several studies investigating the utility of  dextrose prolotherapy to treat knee osteoarthritis. The use of prolotherapy as an intra articular therapy is less well studied than for tendinopathies. For example, some studies utilized multiple injections over time versus a singular injection as well as variable concentrations of dextrose. In a randomized controlled trial, Rabago et al that showed superiority in both pain and function after one year of injection of dextrose prolotherapy when compared to injection of saline and home exercise program alone (Rabago, 2013). Rahimazadeh et al concluded dextrose prolotherapy was inferior to platelet rich plasma for knee osteoarthritis for pain relief, although, significant improvements in pain and quality of life scores were noted after both types of injections (Rahimzadeh et al 2018). 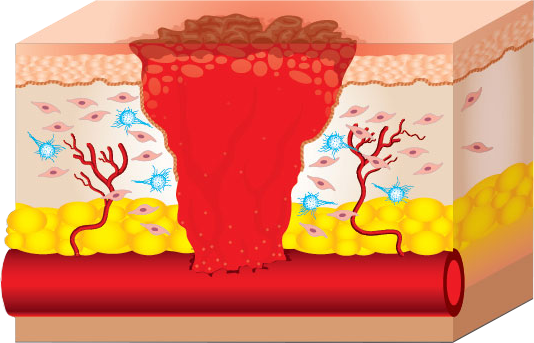 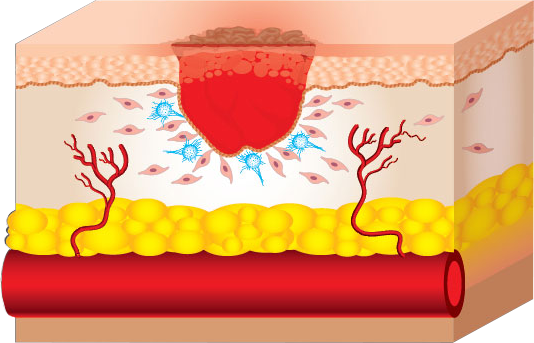 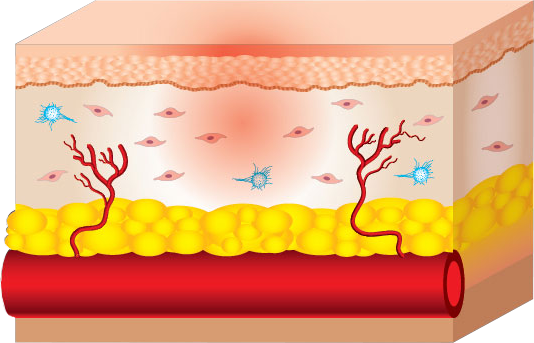 There has been one study involving the use of dextrose prolotherapy for management in myofascial pain syndrome, a very difficult disorder to treat. The mainstay of treatment for this disorder includes physical therapy, soft tissue modalities including heat, electrical stimulation, acupuncture, osteopathic manipulation, and occasionally trigger point injections. Trigger point injections can be done with normal saline, with lidocaine analgesics, and sometimes with steroids. In the past, Kim et al looked at as dextrose as a possible way to help relieve the chronic muscle pain due to providing dextrose to the area of pain to help restore an energy supply to a relatively energy deficient muscle. However, to date, there is no data to support the use of dextrose prolotherapy in myofascial pain but it could be considered in refractory cases (Kim et al 1997).
The limited literature regarding the utility of dextrose prolotherapy is promising, although there is a clear lack of high powered randomized clinical trials to assess its efficacy and comparison to other treatment modalities. Dextrose prolotherapy provides a reasonable option for management of chronic tendinopathies. When compared to other regenerative medicine therapies, namely PRP and stem cell therapy, dextrose prolotherapy represents an inexpensive alternative. Because commercial insurances are reticent to pay for the more expensive treatment options, prolotherapy represents a good alternative to patients.
Dextrose prolotherapy is a safe intervention with few, if any known adverse events. Dextrose is a water soluble product that occurs naturally, allowing the body to tolerate large doses. The risks are minimal and similar to other injection-based procedures including infection, bleeding, or injury to related structures. To date, no adverse events have been reported in the literature associated with prolotherapy. All of these issues can be decreased significantly using proper sterile technique, utilization of ultrasound to identify the target tissue and avoid neurovascular structures, and performance of procedures only in appropriate patients.
Conclusion. In conclusion, dextrose prolotherapy is a treatment option for patient with chronic musculotendinous disorders and knee osteoarthritis who have not improved with conservative management. Overall, the research supporting the utility of prolotherapy is lacking. However, there is some evidence to support its use in the appropriate patient. Anecdotally, this author has found if used in the correct patient population an improvement in pain and function can be achieved. As a medical community, we often overlook dextrose prolotherapy as a treatment modality. Given the limited literature, there is an opportunity to further investigate prolotherapy as a treatment option and compare it to other treatment modalities in high powered clinical trials. This can help improve the spectrum of treatment options available to physicians and patients alike, especially in tendinopathies refractory to other treatments.