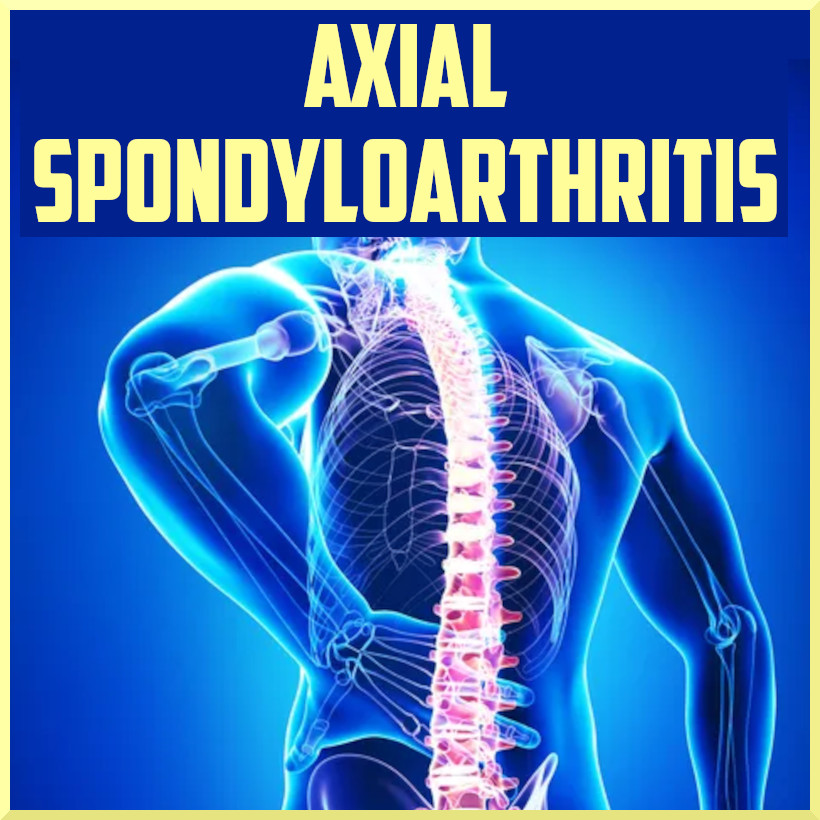 Population studies have shown that chronic back pain is among the most common problems that cause patients to seek medical care and can be a fairly common complaint among athletes also.  Recent data from NHANES 2009-2010 report the frequency of chronic back pain (defined as being present on most days for at least three months) to have risen in frequency to 19.3% of the population between the ages of 20 and 65 years, inclusively[1].

Whenever dealing with athletes and back pain, providers should have awareness of inflammatory back pain (IBP).  Spondyloarthropathies (SpA) are a wide group of inflammatory rheumatic diseases with distinct clinical and genetic characteristics. According to their clinical presentation, patients have predominantly axial or peripheral SpA. A major genetic predisposition was suggested in the ´70s and confirmed latterly by discovering the Human leukocyte antigen B27 as responsible for the disease susceptibility.  Ankylosing spondylitis (AS), a type of SpA, is an autoimmune disease that mainly involves spine joints, sacroiliac joints (SIJs) and their adjacent soft tissues, such as tendons and ligaments. 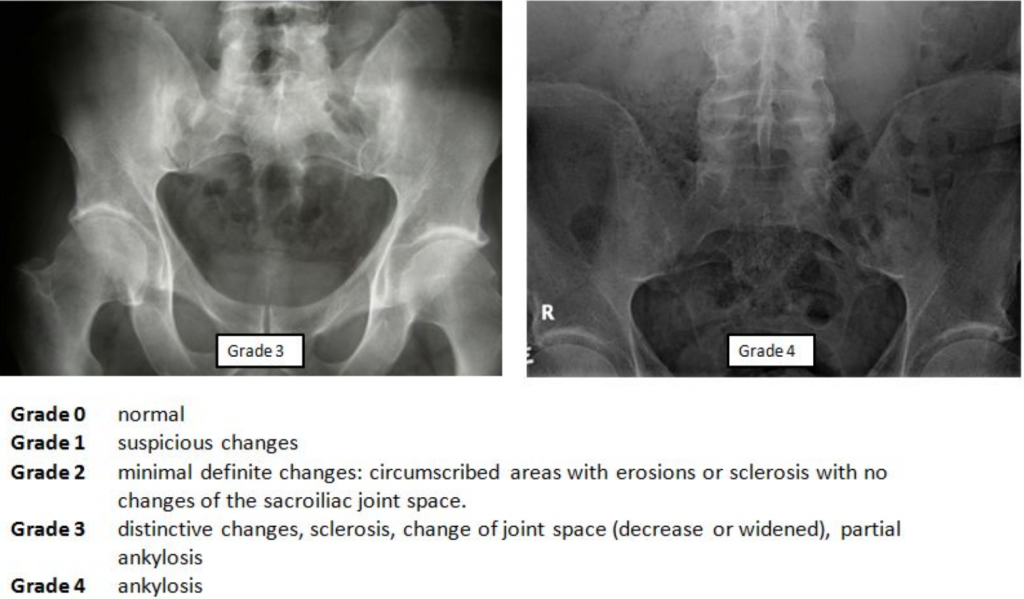 AxSpA differs from AS in several major respects. For example, in contrast to AS, AxSpA is more common in females [5]. Despite the absence of radiographic changes in the sacroiliac joints of many patients with AxSpA, the disease activity in AxSpA is generally comparable to the disease activity in AS as judged by the Bath Ankylosing Spondylitis Disease Activity Index (BASDAI).  BASDAI is a widely accepted measure for disease activity.  It is based on patient responses to 6 questions. It uses a Likert scale and averages the responses [6]. 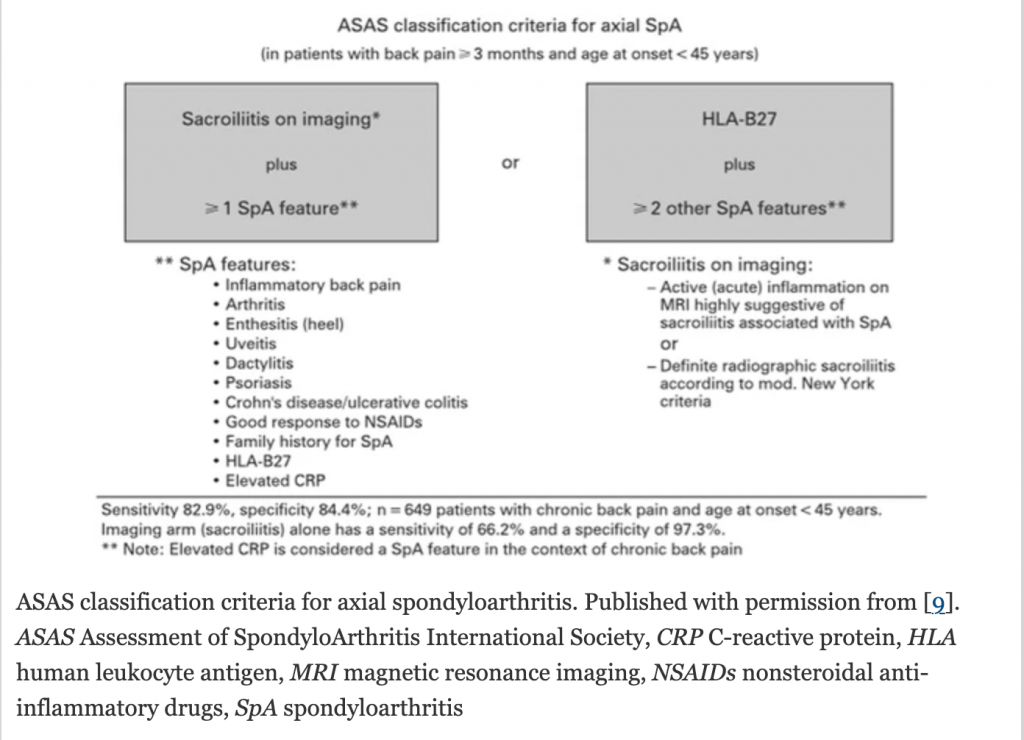 Epidemiologic studies have shown that the frequency of AS and SpA in a given population parallels the frequency of HLA-B27.  In early axial SpA, one recent study has shown that HLA-B27 is associated with earlier onset of IBP, less delay in diagnosis, axial inflammation (spine and sacroiliac joints), radiographic damage of the sacroiliiac joint, decreased disease activity, and lower frequency of psoriasis, but not with physical function and MRI structural lesions of the sacroiliac joints [8].

The effect of HLA-B27 on disease activity in AxSpA has been reported relatively infrequently, but it paradoxically appears to have an opposite effect compared to AS.  HLA-B27 negative subjects with AxSpA generally report higher BASDAI scores than HLA-B27 positive subjects. The reasons for this are not completely understood and more studies are needed[7].  While not validated in the broader diagnosis of axSpA, the ASAS group has suggested that BASDAI may be used to assess disease activity in patients across the spectrum of axSpA, including patients with nr-axSpA [14]. 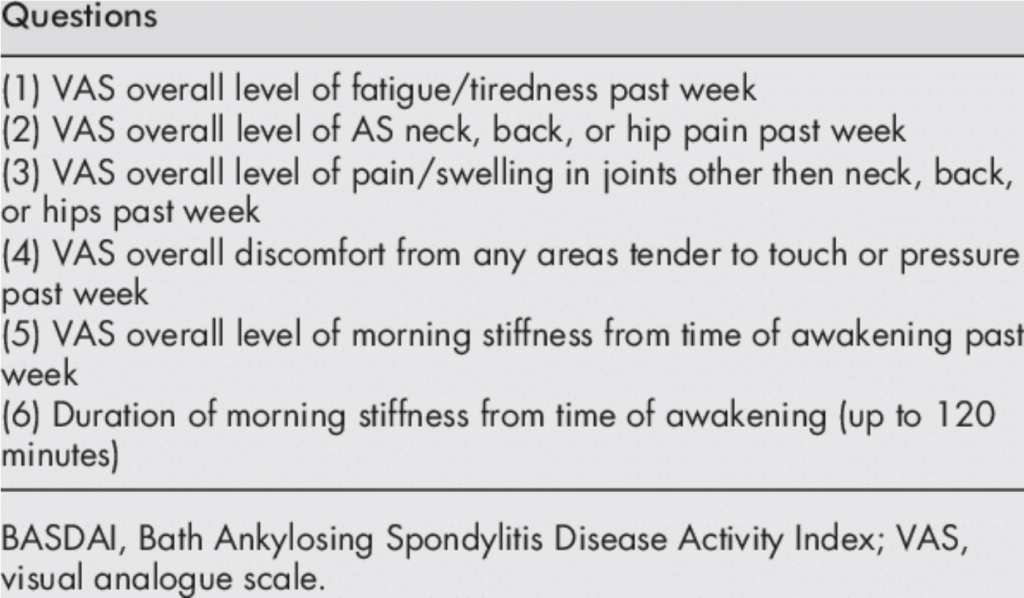 Genetic factors have been acknowledged as crucial in the genesis of AS. The correlation between AS and genetics has been a perpetual topic since hereditary factors of AS were first confirmed within families in 1961[10]. Twin studies have revealed significantly higher concordance between monozygotic twins (63%) than between dizygotic twins (23%). Genetic effects have been identified as pathogenic factors that contribute to over 90% of the population variance for AS manifestations [11].  Even as the most emphasized genetic factor, the overall contribution of HLA-B27 to AS heritability is only ~20%, indicating that other genetic influences contribute to AS [12].  There are many different pathways that play a factor in this disease that are beyond the scope of this post.

The main clinical manifestations include back pain and progressive spinal rigidity as well as inflammation of the hips, shoulders, peripheral joints and fingers/toes. In addition, there are extra-articular manifestations, such as acute anterior uveitis and inflammatory bowel disease (IBD). However, these extra-articular manifestations differ between East Asian and Caucasian populations. In a study involving 988 patients with ankylosing spondylitis in east Asia, only 0.4% developed inflammatory bowel disease. However, in some analyses performed in Western countries, ~5%–10% of patients with AS present with inflammatory bowel disease [13].  Uveitis appears to be more prevalent among patients with AS than nr-axSpA, a difference that is not clearly related to differences in HLA-B27 status [14].

All patients suspected of axSpA should undergo a thorough physical examination. However, physical findings are not very specific and are more useful for monitoring of the disease than for diagnosis of axSpA. These include examination of the spine for ranges of motion, the joints and the heels for arthritis and enthesitis, and the hands and feet for dactylitis; and examination of the skin and eyes for extraarticular features, including psoriasis and uveitis.

AS may cause forward stooping of the thoracic and cervical spine. The degree of flexion deformity can be measured by asking the patient to stand erect with heels and buttocks against a wall and to extend his or her neck, while keeping the chin (mandible) horizontal in an attempt to touch the wall.  Chest expansion is measured at the fourth intercostal level. The patients are instructed to raise their arms above their heads and to exert a maximal forced expiration followed by a maximal inspiration. Normal expansion is usually >2 cm.

Range of motion of the lower spine is tested in the sagittal plane by the Schober test, and in the coronal plane by the extent of lateral spinal flexion.  The Schober test measures the degree of lumbar forward flexion as the patient bends over as though touching their toes. Progressive loss of spinal motion is correlated with x-ray findings.  Gaenslen’s maneuver, another name for the Gaenslen test, stresses the sacroiliac joints. Increased pain during this maneuver could be indicative of joint disease. 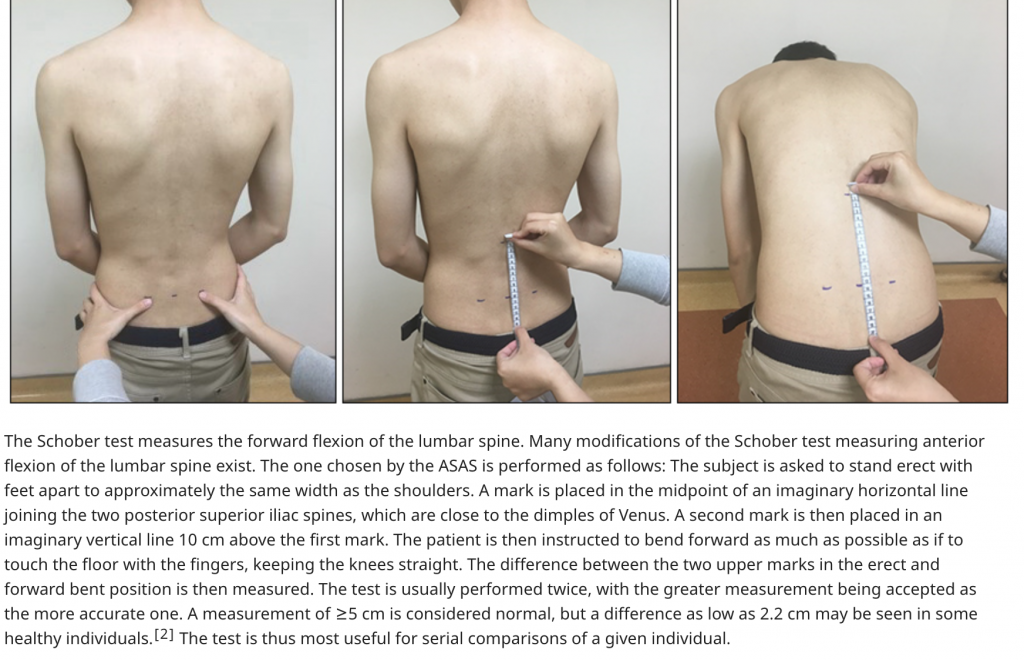 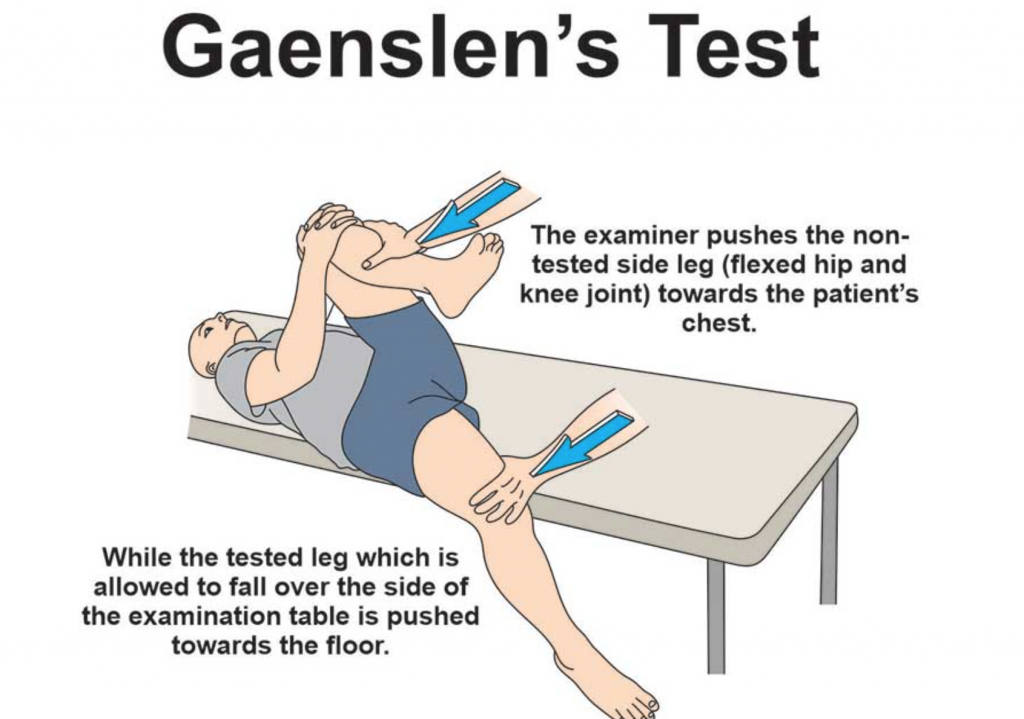 Image 5. Gaenslen’s test.  Increased pain during this maneuver could be indicative of joint disease.

HLA-B27 was mentioned previously and should be evaluated if axial spondyloarthritis is suspected.  The other  biomarker of greatest interest in axial spondyloarthritis has been CRP, although its use and measurement is not without controversy. In general, patients with nr-axSpA have lower levels of CRP than similar patients with AS [15], and this difference remains consistent even after receiving treatment.  CRP has been shown to be useful in its prognostic value with respect to progression and response to treatment. In studies that followed patients with axSpA over time (including both radiographic and nonradiographic disease), CRP positivity was the strongest risk factor associated with radiographic progression [16].  Many times ESR is also ordered alongside the CRP.

Plain radiographs of the lumbar spine and sacroiliac joint can help diagnosis and classification.  Depending on the symptoms, the provider may also order thoracic and cervical spine films.  MRI can also help determine the involvement and grading of the sacroiliac joint.  CT and bone scintigraphy have limited use, as their utility in the evaluation of SpA is limited by various factors, including nonspecificity and lack of standardization.

NSAIDs are considered the initial preferred therapy for all patients with symptomatic axSpA, including patients with both nr-AxSpA and AS.  Current recommendations are to titrate up to the maximum dose and use these agents on a continuous basis, while taking into account tolerability and risk/benefit profile [14].  In addition to its symptom-reducing properties, it has also been suggested that NSAIDs may have a disease-modifying effect through bone growth inhibition via prostaglandin inhibition [22].   The latest update to the ASAS recommendations for treatment of axSpA, including nr-AxSpA, recommends a trial of at least 1 month of maximally dosed NSAIDs prior to initiation of a biologic [3], with the caveat that benefits should outweigh the risks for the specific patient.  Steroids are recommended for use only as local injections to sites of musculoskeletal inflammation, such as monoarticular synovitis or enthesitis.  Sports medicine providers can possibly provide some relief with sacroiliac injections if properly trained.

When NSAIDs fail to control disease symptoms, the next step is the use of biologic DMARDs (disease modifying antirheumatic drugs), such as TNF inhibitors. TNF inhibition has been the therapy of choice for patients with established AS.  The ABILITY-1 study examined the efficacy of adalimumab in patients with axSpA and nr-axSpA and found improvements in ASDAS, BASDAI, functional scores, and radiographic inflammation in the spine and sacroiliac joints after 12 weeks of treatment compared to placebo [23].  The response to adalimumab was greater in those patients with inflammatory changes on MRI and an elevated CRP; those with neither did not have significant improvement relative to placebo [23]. Similarly, in the early sacroiliitis trial with infliximab, treatment and placebo ASAS40 rates were 61% and 18% at 24 weeks, compared with 47% and 12% in the pivotal ASSERT trial of infliximab in AS [24].

Etanercept has been evaluated for efficacy in the EMBARK study in nr-axSpA. In this study of early (<5 years of symptoms) nr-axSpA patients showing improvement in 8-12 weeks [25].  Golimumab has also been studied in both AS and nr-axSpA and, again, the response was fairly comparable [26].

As noted, several trials have shown that patients with a shorter disease duration (<5 years), elevated CRP, or sacroiliac joint inflammation seen on MRI may have a better response to therapy.  Despite the improvement in symptom and inflammation control, it must be noted that there is no firm evidence that TNF inhibitors are actually disease-modifying for axSpA [14].

European cohort studies of axSpA and AS have identified several variables that are independently associated with radiographic progression: baseline syndesmophytes, male sex, smoking, HLA-B27 positivity and elevated CRP [9].  Monitoring can be done in multiple ways.  If an agent is successful, the BASDAI scores should remain low.  The provider may also order x-rays of the sacroiliac region to assess progression and response to treatment.

The diagnosis, classification and management of axial spondyloarthritis remains an evolving topic.  While many consider this more rheumatologic in nature, it is important for sports medicine providers to be aware of inflammatory back pain and signs to look for.  Newer ASAS classification has added non-radiographic spondyloarthritis to the more well known radiographic spondyloarthritis.  Other aspects of disease, such as gender, duration, and inflammatory burden, some of which may differ in those patients with nr-axSpA, appear to be more relevant to clinical course and treatment response. Sports medicine providers may be able to assist with diagnosis and management.