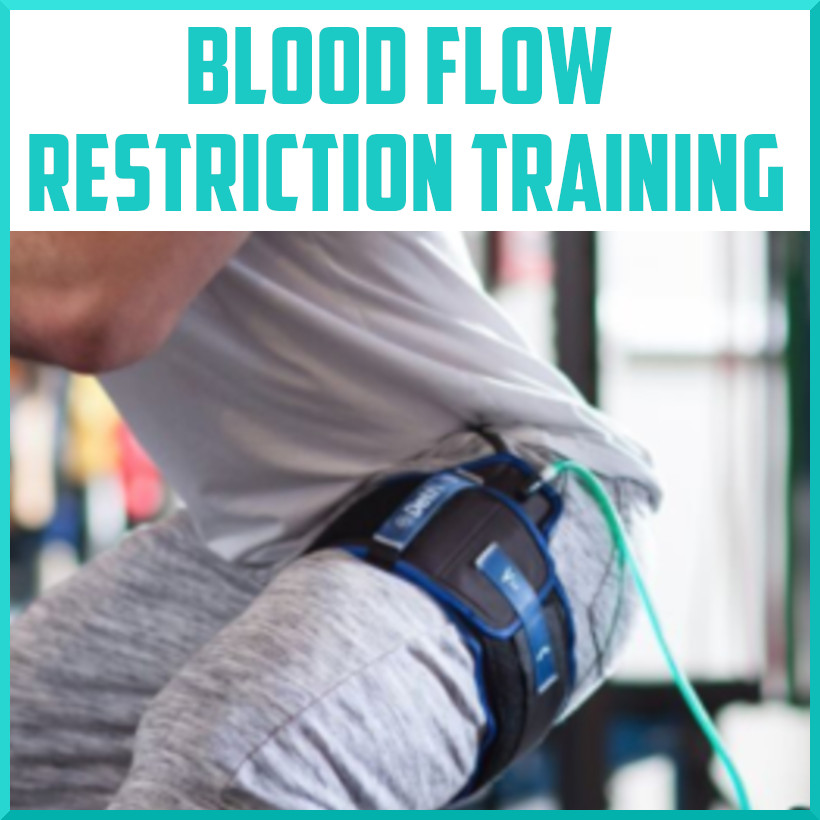 Blood Flow Restriction Training (BFRT), sometimes referred to as Kaatsu, is a rehabilitation technique quickly gaining popularity among physicians and physical therapists. In fact, the popularity and value is so great that many strength and conditioning coaches are now using it to help build strength in healthy athletes. Originally proposed in the 1970s with Dr Kaatsu, the first publication came in 1998 (Shinohara 1998).

You are managing a patient who recently underwent an ACL reconstruction. Early in the postoperative period, the physical therapist is looking to implement blood flow restriction training (BFRT) as part of the rehabilitation. Which of the following is true regarding BFRT and ACL rehab?

The technique can be described as having the goal of occluding venous outflow of the affected limb without limiting arterial inflow. This leads to an anaerobic environment where ischemia and hypoxia occur; generating cell signaling and hormonal changes similar to what is see with high intensity resistance training. Clinically, this becomes a relevant musculoskeletal (MSK) rehabilitation tool because it does not require the high joint forces associated with heavy-load exercise. Individuals can achieve increased muscle burden and physiologic changes at a lower level of resistance training. The exact mechanism of action is poorly understood but several proposed theories include: (a) primarily related to metabolic stress, mechanical tension, (b) elevated systemic hormone production, (c) cell swelling, (d) production of reactive oxygen species (ROS), (e) intramuscular anabolic /anticatabolic signaling, and (f) increased fast-twitch fiber recruitment. It is likely multifactorial.

The technique centers around a device which provides occlusion. There are many products including pneumatic cuffs, hand-pumped blood pressure cuff, elastic wraps and Kaatsu bands (see images below). The amount of occlusion ranges from 60 to 270 mm Hg based on the study referenced (Shinohara 1998). The amount of exercise resistance can vary from 10-50% of 1RM. Duration is typically brief and long enough to achieve the desired set, following which the occlusive product is removed. Along the upper extremity, the tourniquet is placed on the proximal upper arm and for the lower extremity, the proximal thigh. 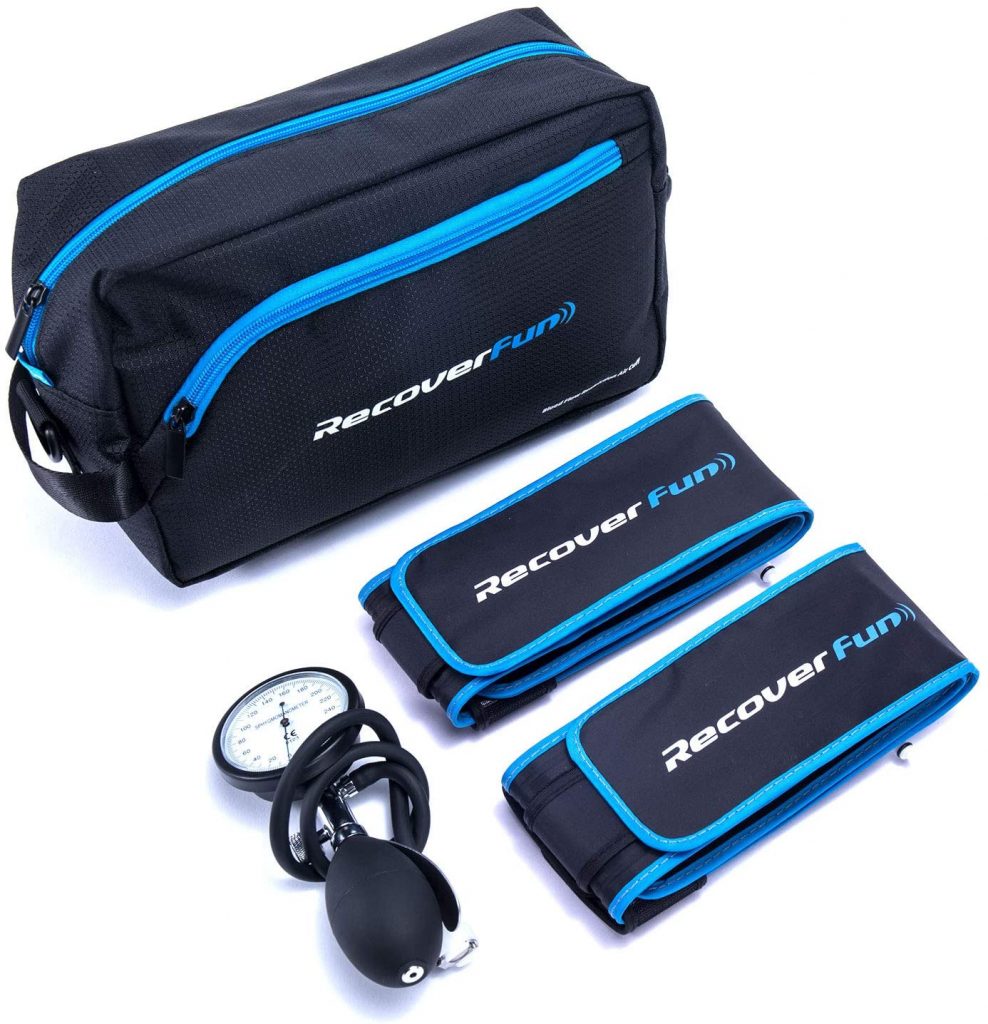 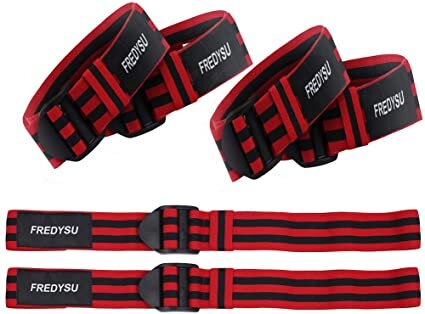 For recovery from pathologic processes, the evidence is more scant. BFRT is most commonly used for rehabilitation from ACL reconstruction, of which several studies have shown benefit. BFRT appears to attenuate postoperative atrophy (Ohta 2003) and helps with early muscle training (Takarada 2000). It is frequently used for rehab from other post-op treatments including meniscus repair or removal, knee arthroscopy, etc although the evidence is lacking and is generally extrapolated from ACL rehab research. There is some evidence that BFRT can be used to increase leg press and knee extensor strength in women at risk for knee osteoarthritis (Segal 2003). Other studies have shown no benefit, although there was less knee pain during physical therapy sessions (Segal 2015, Bryk 2016).

BFRT is generally considered safe. The greatest risk would be leaving the occlusive product on for an extended period of time leading to prolonged ischemia and permanent damage. For this reason it is recommended that BFRT be used by experienced therapists and strength coaches with formal training. Other potential complications include venous thromboembolism which is poorly understood and defined, swelling, lymphedema, nerve and skin injuries. Reported side effects include fainting, dizziness, numbness, pain, discomfort and delayed onset muscle soreness (Brandner 2018). There are no absolute contraindications although consideration should be given to individuals with certain chronic diseases such as coagulopathy, peripheral arterial disease, diabetes, obesity, and sickle cell disease among others.

In summary, BFRT is a promising adjunctive modality for both the healthy athlete and the recovering one. There is a paucity of literature for many diseases outside of ACL rehabilitation and knee osteoarthritis and more research is needed to better define the role of BFRT for these other disease states. Nonetheless, because it is a relatively safe technique it should continue to be used for augmenting strength and conditioning among healthy athletes and in rehabilitation and disease prevention following surgical and nonsurgical pathology.

Case conclusion. The answer is A. Ohta et al found that BFRT helped attenuate muscle atrophy following ACL rehab in the early postoperative period (Ohta 2003). There is no compelling literature to show that the ACL graft increases in size. Furthermore, there is no evidence to show a decreased time in knee brace or need for post op narcotics.

Answer is A. Ohta et al found that BFRT helped attenuate muscle atrophy following ACL rehab in the early postoperative period. There is no compelling literature to show that the ACL graft increases in size. Furthermore, there is no evidence to show a decreased time in knee brace or need for post op narcotics.