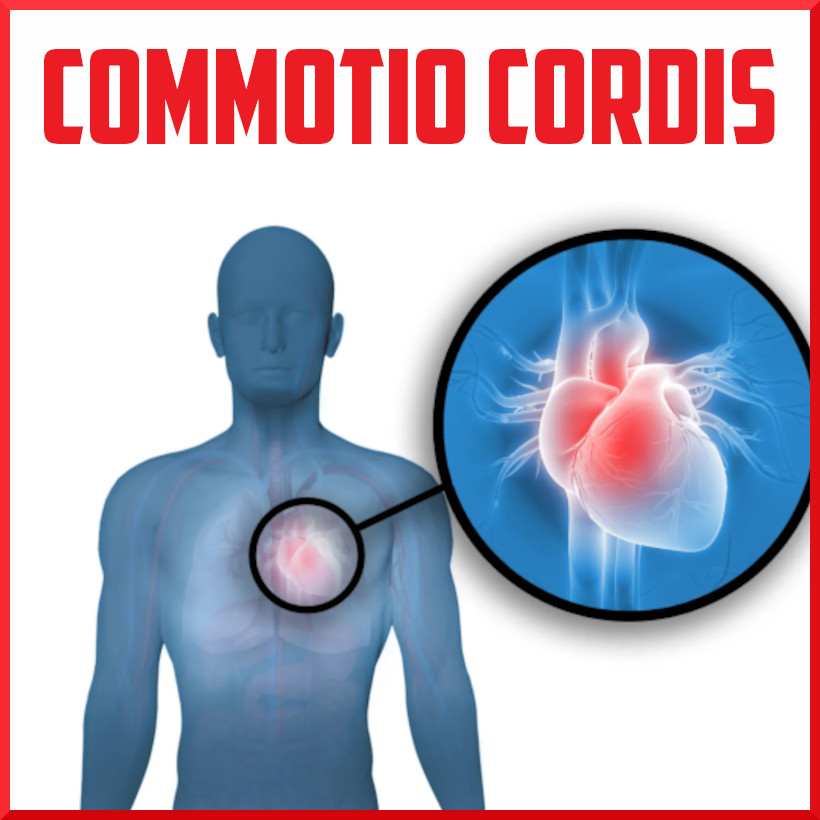 Most spectators across the country witnessed a haunting scene on Sunday, January 1 that will be remembered for a very long time.  Damar Hamlin, a safety for the Buffalo Bills, tackled Tee Higgins of the Cincinnati Bengals during the first quarter. It did not seem like an overly aggressive collision when compared to other collisions that occur in the NFL.  However, he stood up for a few seconds and then collapsed to the ground.

Many sports providers across the country including ATCs and physicians have commented on their experiences and shared their opinions on what exactly happened.  This post is not going to speculate on the root cause of the collapse of Damar Hamlin and we will leave that to the treating physicians and medical team. 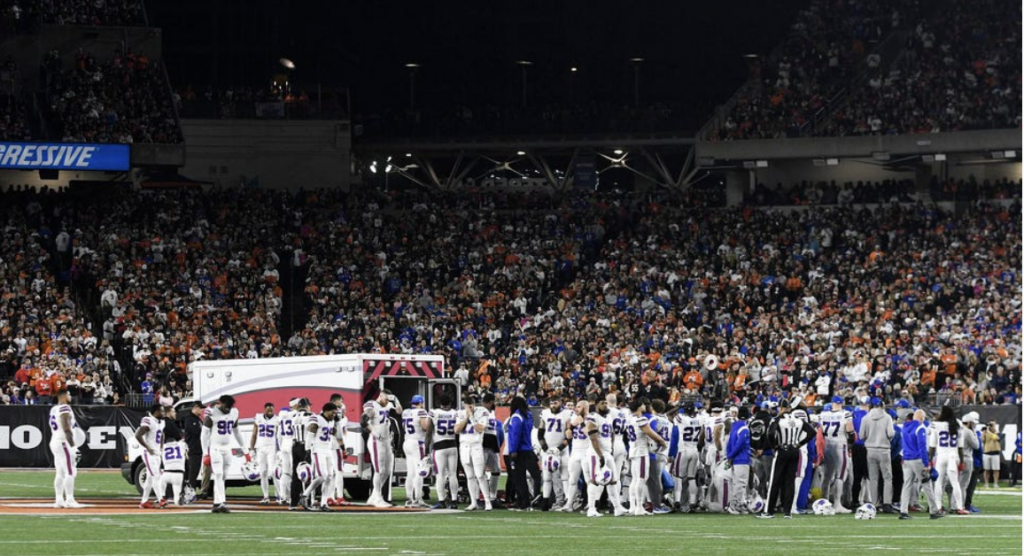 However, as this happened, it was clear that he did have a traumatic blow to the chest.  It did not seem like a cervical spine injury from the way the play happened.  I was personally at the Paul Brown stadium when the unfortunate events of Ryan Shazier occurred and this event felt much different.  As my own personal thoughts occurred on January 1, it did seem a cardiac event was possible and would be included in any differential diagnosis. The differential can be fairly large but would include hypertrophic cardiomyopathy, congenital or undiagnosed heart anomalies, arrhythmogenic right ventricular cardiomyopathy, long QT syndrome, Brugada syndrome, commotio cordis and Wolf-Parkinson White Syndrome.

There have been multiple events of sudden cardiac arrest (SCA) or sudden cardiac death (SCD) that have occurred with varying outcomes.  One of the first documented football injuries occurred in 1971. A Detroit Lions wide receiver Chuck Hughes collapsed while jogging back to the huddle and never regained consciousness.  He was not struck in the chest or head area immediately before this occurred.  He is the only player to have died on an NFL football field.  An autopsy showed he had arteriosclerotic heart disease and suffered a myocardial infarction at 28 years old.

Hall of Fame hockey defensemen Chris Pronger had an event in 1998 in which he was struck by the puck directly in the chest.  He similarly was conscious and moving for a few seconds afterwards and then collapsed to the ice.  He reportedly lost consciousness for 20 to 30 seconds and as the staff was cutting his jersey to start CPR, he regained consciousness.  It was thought he possibly suffered from commotio cordis after testing.  He did undergo testing and played in a game two days later and then played an additional 13 seasons.

Video 1.  Chris Pronger struck directly in the chest area by a slap shot.

In 2003, Marc-Vivien Foé, a 28-year-old veteran of Cameroon’s national soccer team, fatally collapsed while jogging across the field in the second half of a match against Colombia at the FIFA Confederations Cup in 2003.  Attempts were made to resuscitate him for 30 minutes.  He was diagnosed with hypertrophic cardiomyopathy after an autopsy.

Another higher profile case was NHL defensemen Jay Bouwmeester in 2020.  He collapsed on the bench after a reported cardiac episode.  He was on the bench and slumped forward and lost consciousness.  He was diagnosed with an arrhythmia and had an implantable cardioverter defibrillator placed to prevent future incidents.

Christen Eriksen, a soccer midfielder for Denmark, collapsed due to cardiac arrest on the field in June 2021 at the age of 29.  It was reported that he stopped breathing and did not have a palpable pulse.  Eriksen recovered and was later fitted with an implantable cardioverter defibrillator.  He was resuscitated on the field and regained consciousness before he was taken away via ambulance.  He is still currently playing soccer.

​​Commotio cordis (CC) is blunt, nonpenetrating trauma to the chest resulting in irregular heart rhythm and often leading to sudden death [1]. It is a primary arrhythmic event that occurs when the mechanical energy generated by a blow is confined to a small area of the precordium and profoundly alters the electrical stability of the myocardium, resulting in ventricular fibrillation .  An absence of structural cardiac injury distinguishes commotio cordis from cardiac contusion, in which high-impact blows result in traumatic damage to myocardial tissue and the overlying thorax [2].

For most providers in their training, commotio cordis does surface and is a popular board question or practice board exam question.  Most of these questions have a vignette of an athlete, many times a baseball player, being struck directly in the chest.  The question may ask what portion of the QRS complex does this blow need to occur to cause commotio cortis. 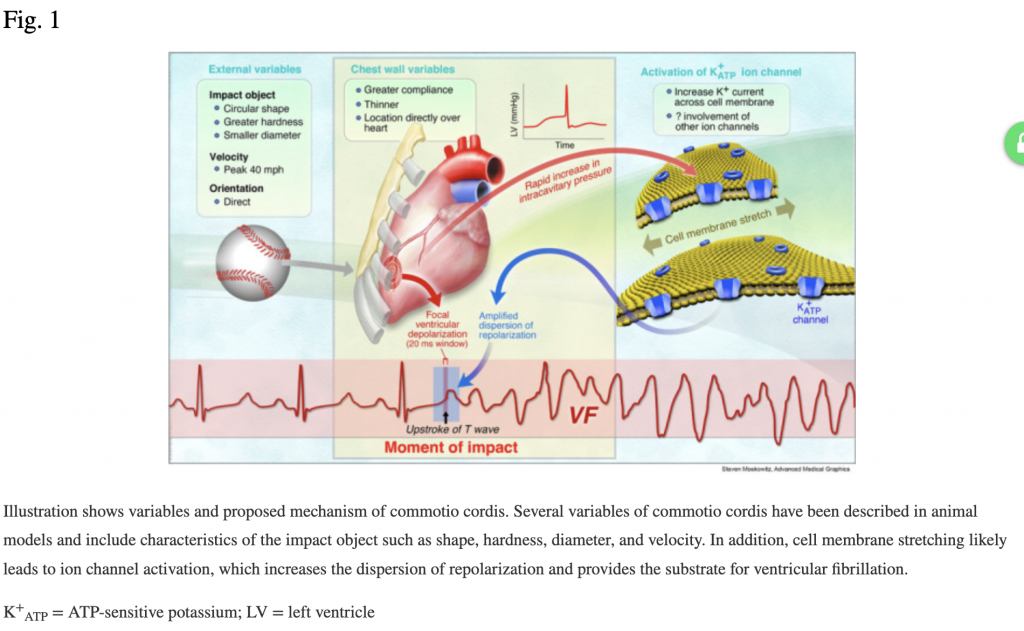 According to Marijon, only 2% of sudden cardiac death (SCD) in sport is caused by the mechanism of commotio cordis [3]. However, Palacio emphasized that CC is the second most common cause of sudden cardiac deaths in US athletes and the number of reported cases is rising [4]. Forty seven percent of reported cases occurred during athletic participation, mostly during baseball, softball, hockey, football, soccer, lacrosse, karate and rugby. The victims were mostly young males aged 10-18, however the age range of the victims is from 7 to 42 years. Occurrence of CC is most common in the USA in baseball, where 25% of reported cases of CC in youth baseball were from a pitch that averaged 30 to 50mph. Common projectiles responsible for CC cases include hockey pucks, softballs, soccer balls and extremities during martial arts competition [4].

By virtue of this impact, malignant arrhythmias consequently develop leading to the individual’s immediate demise, accompanied by a relatively normal post-mortem analysis [6]. The timing of the blow causes a CC is also important, which must occur during an electrically vulnerable period within a narrow window of 10 to 20 msec on the upstroke of the T wave, just before its peak (accounting for only 1% of the cardiac cycle) [5].

Although cardiovascular collapse is virtually instantaneous, 20% of victims remain physically active for a few seconds after the blow (e.g., continuing to walk, run, skate, throw a ball, or even speak), which may reflect individual tolerance for sustained ventricular tachyarrhythmias [7].  This does seem to be somewhat relevant in some of the higher profile cases in professional cases.

Before the turn of the 21st century and improvements in resuscitation rates, commotio cordis was the second leading cause of SCD in athletes and was frequently associated with baseball and fistfights [8].  Various factors affect survivability, including the shape of the impact object, as well as its hardness, diameter, velocity, and vector orientation; likewise, the athlete’s chest wall compliance, overlying habitus, and site of impact affect outcome [2].

Cardiopulmonary resuscitation occurred in 171 of the 216 individuals.  Of the 16 cases in which AEDs (automatic external defibrillators) were known to be used, 11 survived (69%).  This was shown to be more frequent in recent years, likely because of recent laws requiring more public places to have AEDs.  Of the 163 events in which time from collapse to initiation of resuscitation could be estimated, this interval was less than 3 minutes in 121, of whom 48 survived (40%). In contrast, of the other 42 cases in which resuscitation was judged to be substantially delayed (estimated 43 minutes), there were only 2 survivors (5%) [10].

Another very recent FIFA analysis from 2014 to 2018 showed somewhat similar results.  When evaluating soccer cases highly suggestive of commotio cordis, it constituted 9% of total cases of sudden cardiac arrest (14 of 152) with a mean age of 22 years. In 11 of 14 cases (79%), the ball hit the chest and in 3 cases (19%) there was a tackle, in which a blow by the opponent’s elbow or fist to the precordium was reported. Commotio cordis was survived in six cases (43%) [13]. 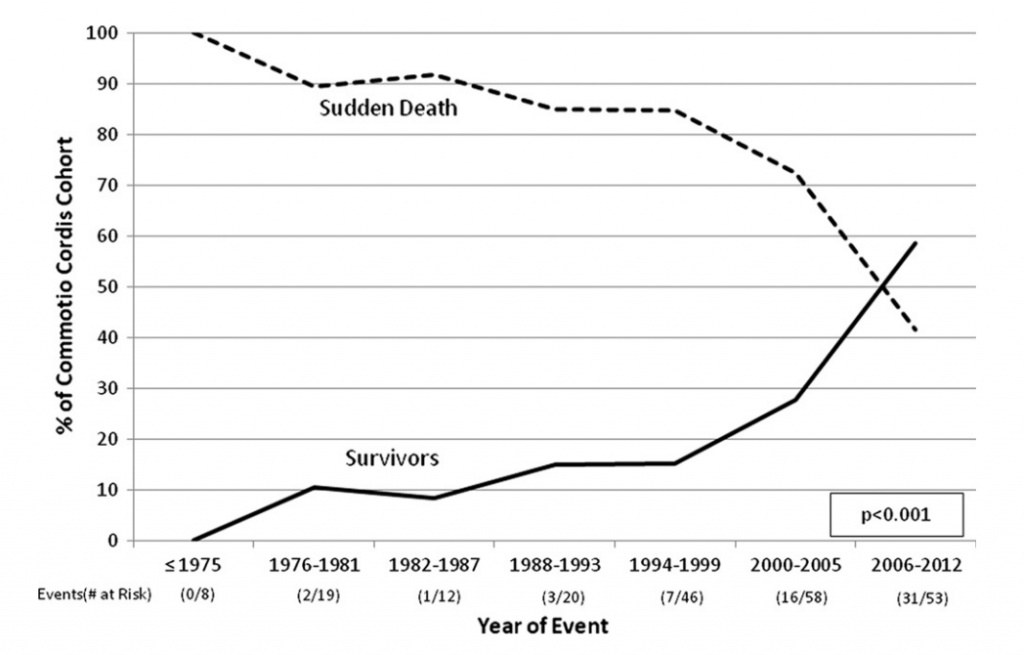 In a broader sense, other studies have shown that having an AED and prompt CPR can improve outcomes.  Drezner et al. evaluated outcomes of sudden cardiac events in 2149 high schools over a 2 year period, which equated to 59 total cases.  Fourty-two (71%) survived to hospital discharge and 34/39 (87%) survived if an AED shock was delivered onsite [14].

Time to defibrillation is the single most important determinant of survival in cardiac arrest, as VF generally evolves into asystole within a matter of minutes 56. The probability of a successful defibrillation declines 7- 10% per minute for every minute that defibrillation is delayed without CPR and 3-4% per minute with bystander CPR [15].   Following induction of VF in anaesthetized animal subjects via blunt chest trauma, defibrillation after 1, 2, 4 and 6 minutes, showed survival rates of 100%, 92%, 46% and 25% respectively [16].

Patients with return of spontaneous circulation should be transferred to the nearest appropriate facility capable of providing post resuscitation care and ventilatory support. A complete cardiac evaluation, including a 12-lead ECG, ambulatory Holter monitoring, stress ECG and echocardiography, is advised for all survivors [17].

The 2015 American Heart Association Guidelines has recommended the use of therapeutic hypothermia for adult patients that present after a cardiac arrest or with a rhythm of ventricular fibrillation [8].  The task force recommends targeted temperature management for adults with out-of-hospital cardiac arrest with an initial shockable rhythm at a constant temperature between 32°C and 36°C for at least 24 hours.

Eligibility for return to competitive sporting activity should be based on sound clinical judgment for that specific individual. There is, at present, no evidence to suggest that survivors of commotio cordis have a greater risk for any future arrhythmic events and accordingly, survivors cannot be disqualified from competitive action solely on the basis of a previous occurrence [7].

In conclusion, sports medicine providers should always be prepared and have a plan for the worst possible situations.  Commotio cordis is a diagnosis of exclusion and the history and on site providers are vitally important to survival.  As many of these tragic events cannot be completely prevented, accessible AEDs or field-side defibrillators, continued CPR training and updated emergency action plans, remain as some of the most important forms of management that are available for all causes of cardiac arrest in young athletes.

We will conclude by including a link to a video summarizing the management of sudden cardiac arrest in athletes.  We appreciate Drs. Drezner, Maron, Link and all physicians continually studying and making improvements in this field.