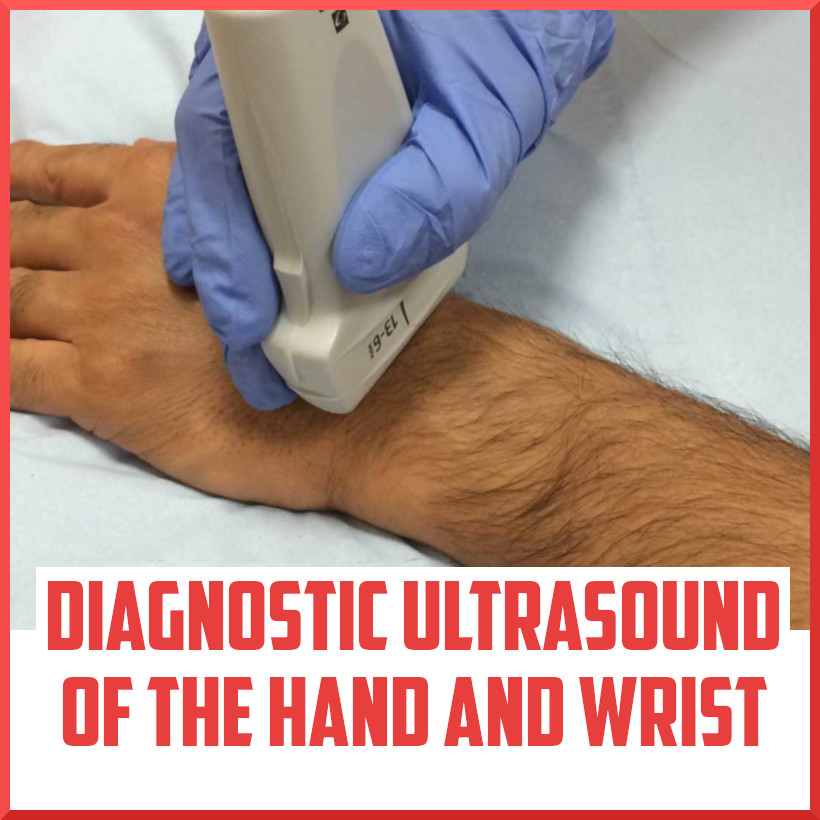 Diagnostic ultrasound of the wrist and hand

Moving forward in our ultrasound series after the shoulder and elbow, the wrist and hand diagnostic scan will be covered in this week’s post. The superficial nature of the complex, small anatomical structures of the hand and wrist lend themselves well to ultrasound (US) evaluation [1]. Ultrasound allows confirmation of the diagnosis and can distinguish solid from cystic lesions. It allows the operator to determine the anatomical relationships of the mass and thus avoid critical structures, such as blood vessels and major nerves. US guidance can also help the operator to avoid biopsy of necrotic or atypical areas within the lesion. By optimising the needle position US guidance therefore increases the chances of a successful outcome [2].

You are performing a diagnostic ultrasound of a wrist to evaluate for carpal tunnel syndrome. What is the most radial tendon located in the carpal tunnel?

The patient and sonographer should be seated opposite or 90 degrees to each other, with the patient’s hands resting on the examination table.  Supporting the area with a rolled towel may help expose the areas of interest.  Higher frequency transducers should be used if available with either hockey stick or linear probes.  In the hand and wrist, focused examinations targeted to answer the clinical question are usually performed. This includes scanning the relevant structures in at least two orthogonal planes, with dynamic and Doppler assessment. When in doubt, comparison can be made with the contralateral side [1]. 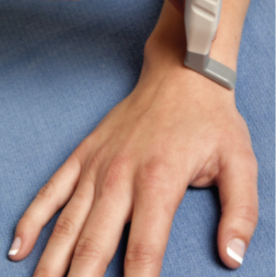 Most diagnostic scans will be driven by checklists that evaluate both the volar and dorsal wrist and hand.  The main structures of the dorsal wrist and checklist involve the various extensor and abductor tendons of the six wrist compartments, the radiocarpal, midcarpal and distal radioulnar joint recesses. The “home base” or point of reference used for many is the Lister tubercle of the dorsal radius, which is a bony prominence.  The tendon immediately ulnar to this is the extensor pollicis longus (EPL) of the third wrist compartment.  Moving the transducer in a radial direction, the extensor carpi radialis brevis and then extensor carpi radialis longus are seen in the second compartment [3].  The extensor pollicis longus tendon can then be seen superficial to the extensor carpi radialis and ulnaris tendons in an oblique fashion proximally to distally.

The superficial branch of the radial nerve courses from the volar to dorsal aspect of the distal forearm tendons and extensor retinaculum. After coming back to Lister’s tubercle and moving ulnarly past the EPL (third compartment), one can evaluate the fourth (extensor indices and extensor digitorum) and fifth compartments (extensor digiti minimi). The posterior interosseous nerve is deep within the radial aspect of the fourth dorsal extensor compartment. Moving ulnarly, the extensor carpi ulnaris (ECU) sits in a concave groove making up the sixth compartment. Up to half of the ECU tendons can be located outside of this groove and this is considered normal. Each extensor tendon should also be traced in the long axis throughout the wrist [4]. 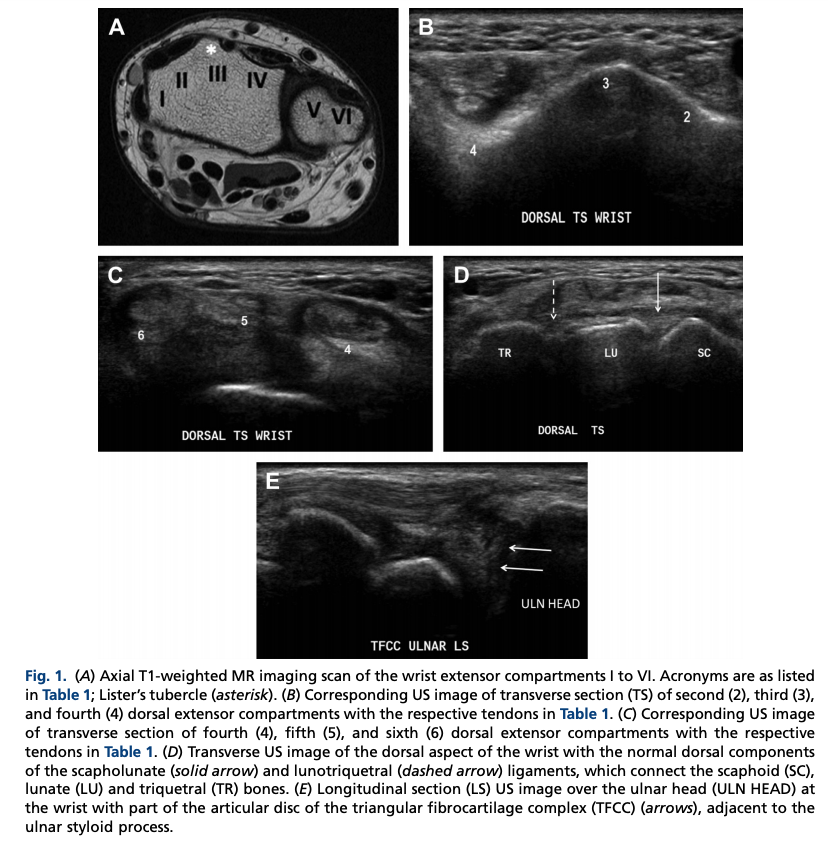 The dorsal component of the scapholunate (SL) and lunotriquetral ligaments appear as fibrillar echogenic structures (Fig 2.) , whereas the triangular fibrocartilage (TFC) appears homogenously echogenic. The TFC consists of the triangular fibrocartilage, the meniscus homologue, the extensor carpi ulnaris tendon sheath and the volar and dorsal radiocarpal ligaments (Fig 3). The TFC is best assessed by placing the transducer along the ulnar side of the wrist in a paracoronal plane, using the extensor carpi ulnaris (ECU) tendon as the acoustic window. Although MR imaging remains the modality of choice to assess these structures, patients may present for US of a lump in these regions, which are revealed sonographically as ganglion cysts decompressing from tears of these structures. 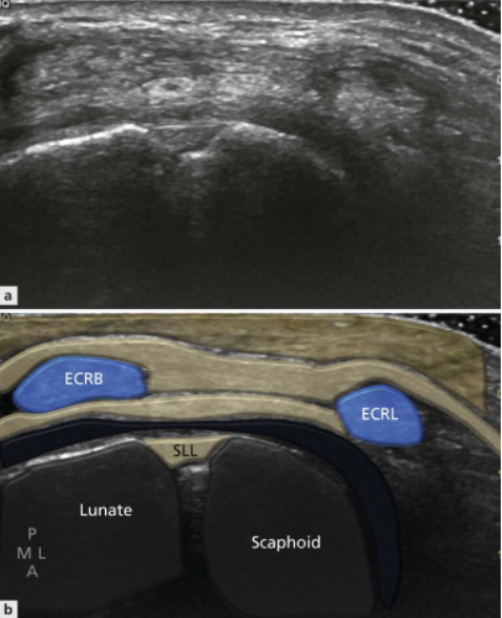 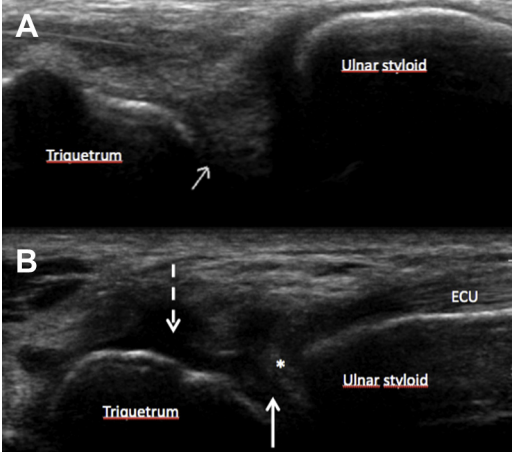 The dorsal fingers can be evaluated next.  The thin, hyperechoic fibrillar extensor digitorum extends over the metacarpophalangeal joint (MCPJ) in the sagittal plane.  The extensor tendons consist of extensor digitorum (ED), extensor indicis (EI), and extensor digiti minimi (EDM). There is significant anatomic variability in the arrangement of the extensor tendons. Most commonly, the ED provides one tendon slip to the index and middle finger, and two to the ring finger. The little finger receives two tendon slips from the EDM, which occasionally provides a tendon slip to the ring finger. The EI forms a single tendon that inserts into the extensor expansion at the metacarpal joint (MCPJ) of the index finger. At the level of the MCPJ, the extensor tendons split into three slips which blend in with the extensor hood, a triangular fibrous expansion that appears as a thin (2 mm) echogenic structure.

One can evaluate these tendons for subluxation with extension and flexion of the digit while placing the probe over the MCPJ. The central slip inserts into the dorsal aspect of the middle phalanx and is held in place by the sagittal band, a fibrous sheet that surrounds the MCPJ by inserting on either side of the volar plate. The two lateral slips receive contributions from the intrinsic muscles of the hands, converges into a conjoint tendon at the level of the middle phalanx, and then inserts into the base of the distal phalanx (Fig 4). The ultrasound can penetrate through the nail and allows visualization of the underlying hypoechoic nail bed, subungual space and the surface of the distal phalanx.

The volar wrist contains the median nerve, flexor digitorum tendons and volar joint recesses. The flexor tendons enter the wrist through the carpal tunnel, which is deep to the flexor retinaculum. Scanning normally will begin in the transverse plane (Fig. 5). The flexor retinaculum is attached to the pisiform and hook of hamate and the ulnar side and the scaphoid and trapezium on the radial side. There is a superficial band that attaches to the scaphoid and trapezium tubercle and a deep band that attaches to the groove of the trapezium. The flexor carpi radialis tendon (FCR) traverses between these bands and sits in its own fibro-osseous canal. The flexor pollicis longus (FPL) is the most radial tendon within the carpal tunnel. The flexor digitorum profundus (FDP) tendons run deep the the flexor digitorum superficialis (FDS) tendons and are contained in a single common compartment.

The median nerve lies just beneath the retinaculum, between the FPL on its radial side, and the FDS tendons on its ulnar side. As it traverses through the carpal tunnel, the nerve becomes progressively flatter. This has the classic “honeycomb” appearance of peripheral nerves and appears relatively hypoechoic in the carpal tunnel. If there is any question about identification of the median nerve, one can follow the nerve proximally in the transverse plane. The normal median nerve courses radial to the flexor tendons and the moves ulnar and deep between the FDS and FDP and becomes more hyperechoic. The normal cross-sectional area of the median nerve has been established at 10 mm squared at the level of proximal margin of the retinaculum, which is usually in the shape of an ellipse. 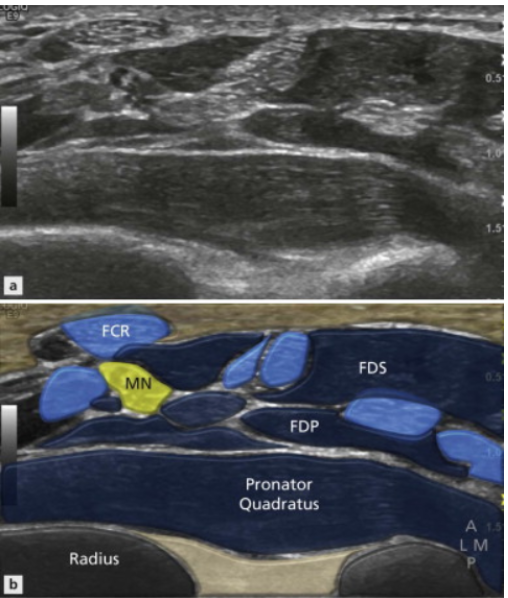 The ulnar nerve lies within the Guyon canal, with the ulnar artery lateral to it. The pisiform and hamate form the floor and the flexor retinaculum and pisohamate ligament forms the roof of Guyon canal. The ulnar artery lies just superficial to the flexor retinaculum and the ulnar artery runs adjacent to the ulnar nerve. The volar radiocarpal and midcarpal joint recesses are identified by adjacent bone contours. The volar lip of the distal radius, the lunate and the capitate have characteristic shapes. The volar recess is between the distal radius and the lunate and capitate bones. The distal radioulnar joint can also be evaluated by placing the probe between the radius and ulna.

The flexor tendons can be evaluated in both short and long axes and are hyperechoic and fibrillar (Fig 6).  The annular pulleys have a trilaminar appearance on ultrasound and consist of specific sites of focal thickening.  A normal pulley often appears hypoechoic relative to the surrounding structures.  The A1 pulley can be seen at the level of the MCPJ and  can be distinguished from other tendons by passive movement of the distal phalanx.  At the level of the proximal phalanx, the A2 pulley can be identified and moving the transducer slightly oblique can help with anisotropy and visualization of the tendon (Fig 7).  The hyperechoic volar plate is identified at the level of the PIP joint.

The A3 and A4 pulleys are superficial to the flexor tendons at the level of the PIP and middle phalanx, respectively. The A4 pulley can be difficult to visualize in half of the population. The FDS inserts on the middle phalanx and the FDP extends over the volar plate and inserts on the distal phalanx. At the proximal third of the proximal phalanx, the FDS tendon splits into two slips, each passing around and reuniting deep to the FDP tendon, before attaching to the proximal half of the middle phalanx. Proximally, the lumbricals and interosseous muscles can be identified and evaluated. 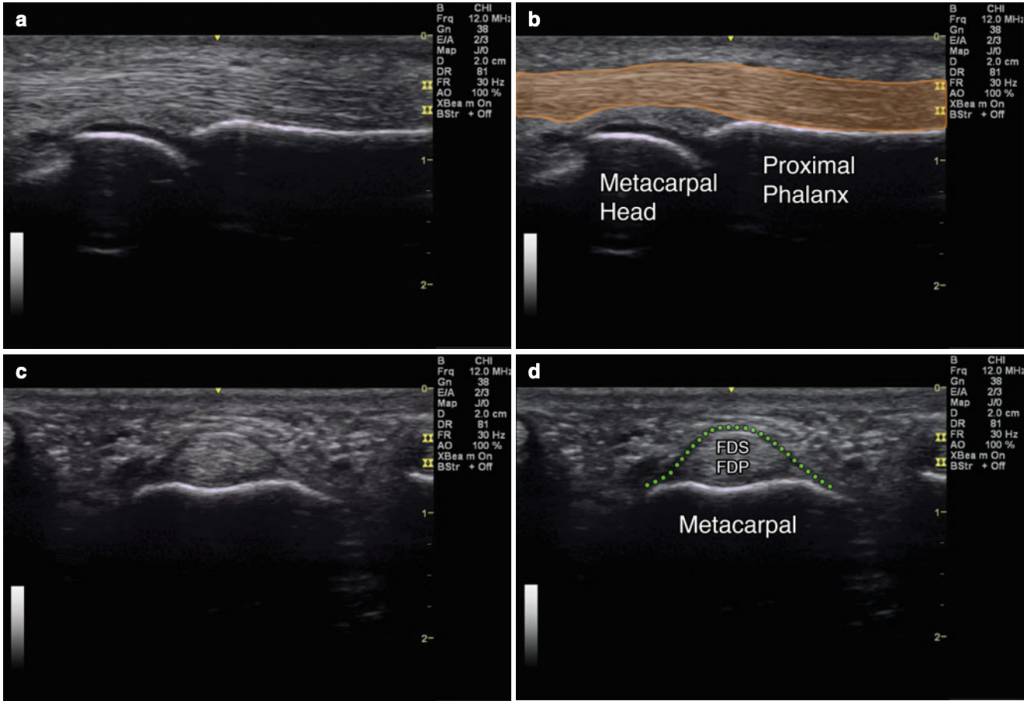 The thumb has certain pathologies that differ from the other digits. On the ulnar side of the MCPJ, lies the adductor aponeurosis, an echogenic structure composed of fibers from the abductor pollicis longus (APL) and the extensor hood of the thumb. This inserts into the ulnar side of the base of the proximal phalanx, and lies superficial to the ulnar collateral ligament (UCL). Whether this relationship is preserved needs to be established when a UCL tear is present and this is usually examined from the dorsal surface. One can also stress the UCL if looking at this after a suspected UCL injury or gamekeeper’s thumb.

The insertion of the APL at the dorsal aspect of the base of the first metacarpal should also be examined. At the radial side of the first MCPJ, further tendinous insertions include that of opponens pollicis into the mid-to-distal first metacarpal, as well as abductor and flexor pollicis brevis into the base of the proximal phalanx. These are usually examined from the volar side. The flexor pollicis longus (FPL), which lies between the abductor pollicis and opponens pollicis muscles, should also be evaluated at its insertion on the distal phalanx and can be traced through the thenar eminence and into the carpal tunnel.
The first dorsal compartment is many times associated with the thumb and was briefly mentioned earlier. The abductor pollicis longus (APL) and extensor pollicis brevis (EPB) tendons are usually in the same compartment, but some patients have separate subcompartments for the APL and EPB tendons within the first extensor compartment (Fig 8). Three anatomical variants have been described with ultrasound. Complete sub compartmentalization has a septum throughout separating the APL and EPB tendons. With distal incomplete sub-compartmentalization, the APL and EPB run in the same sheath at the level of the distal radius until the crossover with the second dorsal compartment. The last variant has no sub-compartmentalization. This is not necessary to differentiate for a diagnostic scan, but will help with any further injections of surgery [7]. 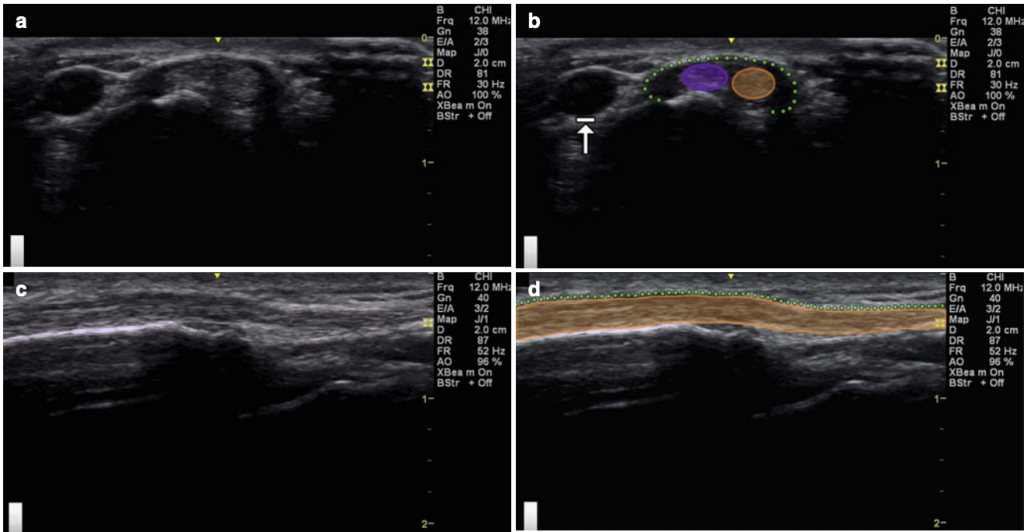 In summary, the development and refinement of ultrasound (US) transducers with frequencies higher than 10 MHz has improved the capability of US to examine superficial organs and tissues.  Ultrasound is accepted as a primary means of examining the musculoskeletal system and for most pathologies. Its low cost, availability, noninvasive nature and the possibility of a dynamic examination make US an excellent imaging technique to investigate a wide range of conditions affecting the hand and wrist and can aid in decision making in regards to interventions such as injections or surgeries.

B is the correct answer. The flexor pollicis longus is the most radial tendon located inside the carpal tunnel. The flexor carpi radialis is more radial, but travels outside of the carpal tunnel for the vast majority of individuals. The flexor digitorum profundus and superficialis are more ulnar in orientation.
Read, John W., et al. “Diagnostic ultrasound of the hand and wrist.” The Journal of hand surgery 21.6 (1996): 1004-1010.
– More Hand Pain @ Sports Med Review: https://www.sportsmedreview.com/by-joint/hand/