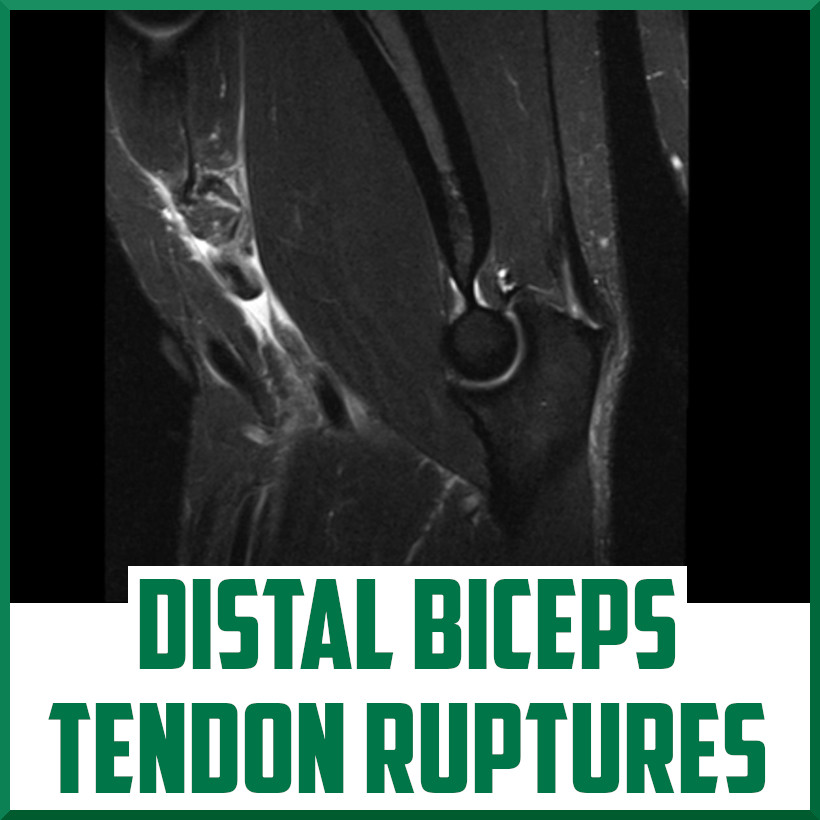 Acute distal biceps tendon tears are fairly uncommon injuries that mainly affect active males. This is something that can have a fairly straightforward diagnosis in a sports medicine clinic with a common presenting history and physical examination. The typical mechanism includes an eccentric load and reports show that the majority of individuals injure the dominant arm (up to 85 percent in some reports). Disruptive injury can result in a partial or complete tear, with the latter being more common. The ability to distinguish complete from partial tears is critical because the urgency and nature of treatment options differ significantly. The overall incidence is 1.2 to 2.5 per 1,000 patients per year [1]. Risk factors include smoking and increased body mass index. Greater than 90 percent are males and the two-thirds of patients are between 25 and 54 [2]. Females affected are typically older than 60 and partial tears are more common when compared to men.

A 28 year old powerlifter presents to your clinic two days after an injury to his left elbow. He states that he was training for a strongman competition and was performing curls with a large axle and felt something pop in his anterior elbow area. On examination, there is a Reverse Popeye deformity and he has a positive biceps crease interval (BCI) and passive forearm pronation (PFP) test. He is a nonsmoker but does admit to past anabolic steroid use. What is the most likely treatment for this athlete?

A) Rest, NSAIDs and return to lifting as tolerated

B) Referral to orthopedic surgery

Distal biceps ruptures can occur at the musculotendinous junction and the insertion. The biceps brachii muscle is spindle shaped and consists of a long head and a short head. The two heads typically merge at the deltoid tuberosity and insert at the bicipital tuberosity, which is located on the proximal aspect of the radius (Fig. 1). Some also have a bifurcated distal biceps tendon distally and isolated ruptures of bifurcated tendons have been reported [3]. The short head inserts distal compared to the long head and there is variation of the footprint anatomy and thickness. The bicipital aponeurosis, or lacertus fibrosus, is a broad fascial band that serves to separate the superficial and deep structures within the cubital fossa. The middle zone between the musculotendinous junction and the insertion is a known hypovascular zone and may contribute a diminished ability to support the tendon [4]. 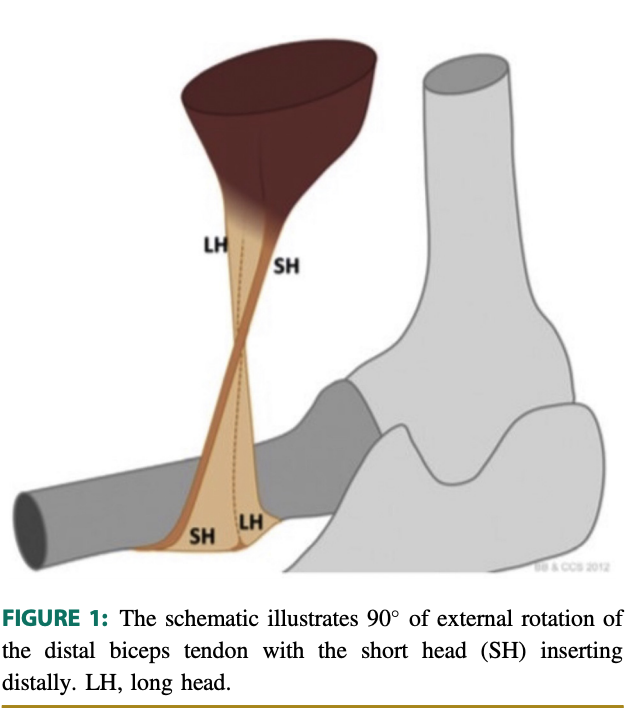 A thorough history and examination should be taken and performed. As mentioned earlier, there is typically an injury that results from an eccentric load or carrying a heavy object. It is common for patients to report an audible “pop” and there may be a burning sensation afterwards in the area. Depending on the severity, there may be an inability to flex the elbow or supinate the arm. Many have resultant ecchymosis in the forearm. It is important to ask about smoking status, use of anabolic steroids, pain prior to the injury whether it is acute or chronic and any recent changes in physical activity. It is important to rule out any neurologic deficits that may lead to elbow flexion weakness.

On examination, there may be a bulge proximal to the insertion, which is sometimes called a “Reverse Popeye” deformity. There will be asymmetric weakness in supination and elbow flexion when compared to the opposite side. The provider can also isolate the biceps from the supinator by flexing the elbow to 90 degrees with the arm in maximal supination and testing supination strength. The most common special test is the hook test, which has been shown to have a high specificity and sensitivity [5]. The examiner uses their finger to capture the lateral edge of the distal biceps tendon. If the tendon is intact, the examiner should be able to insert the finger roughly one centimeter underneath the tendon [5]. The provider should compare the appearance of the biceps when the elbow is flexed to 90 degrees to compare the contour and musculature of the opposite biceps tendon, as there may be some variation between individuals. The passive forearm pronation (PFP) test is based on the observation that the biceps muscle belly moves proximally with forearm supination and distally with forearm pronation, both actively and passively. The examiner moves the patient’s forearm through a passive range of supination and pronation, using both palpation and visualization to assess for appropriate movement of the biceps muscle belly.

The biceps crease interval (BCI) is used to assess for biceps rupture by measuring the distance between palpable anatomic landmarks. First, the patient’s elbow is brought from flexion into full extension while supinating the forearm. The main flexion line of the antecubital fossa is marked (Fig. 2). The contour of the distal biceps is lightly palpated back and forth along a line parallel to its long axis to identify the point at which the curve of the distal biceps begins to turn most sharply toward the antecubital fossa (cusp). The cusp is marked with a transverse line. The distance between the crease and the cusp is then measured in centimeters to one decimal place, and this distance is recorded as the BCI. The contralateral, unaffected arm is also measured to calculate a biceps crease ratio. Using a threshold of 6.0 cm for the BCI or 1.2 for the biceps crease ratio, the authors report a sensitivity, specificity, and overall accuracy of 92%, 100%, and 93%, respectively [7]. Application of the hook test, passive forearm pronation test, and BCI test in sequence result in 100% sensitivity and specificity for complete biceps ruptures when the outcomes of each test are in agreement [8]. 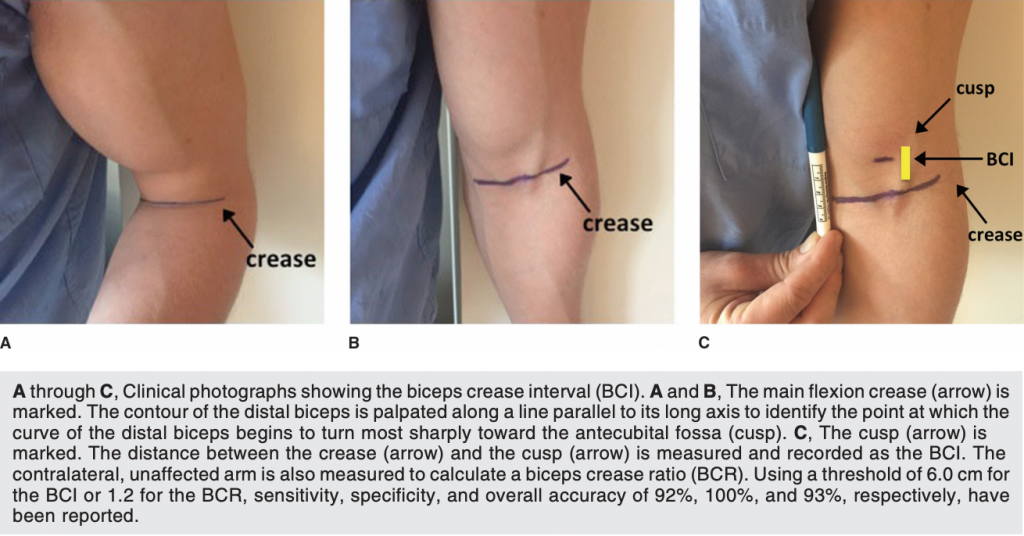 Standard radiographs of the elbow are sometimes done and may show soft tissue swelling and occasionally show a bony avulsion injury, although this is rare. Magnetic resonance imaging (MRI) is sometimes done to characterize the amount of tendon remaining in the setting of a partial biceps tendon tear or to elucidate the amount of retraction present in the setting of a full tear. The FABS (flexed elbow, abducted shoulder and forearm supinated) view is ideal for MRI studies and should be ordered when evaluating this injury [9]. MRI has been reported to be reliable in identifying distal bicep tears with a 100% sensitivity and 82.8% specificity for diagnosis of complete tears and partial tears, respectively [10]. The use of ultrasound as an imaging test for diagnosing distal biceps injuries injuries is becoming increasingly common. There is increasing evidence that ultrasound presents many advantages over MRI, e.g. lower cost, greater accessibility, quick contralateral comparison, and the possibility of performing dynamic examinations [9]. Recent studies have shown similar sensitivity and specificity for distal biceps tendon tears and other classification proposals have been made when paired with MRI findings (Fig. 3). The short-axis anterior approach and the long-axis oblique techniques are most common when evaluating the distal biceps tendon (Fig 4). It has been reported to have 95% sensitivity, 71% specificity and 91% accuracy in the diagnosis of complete versus partial DBT tears [11]. 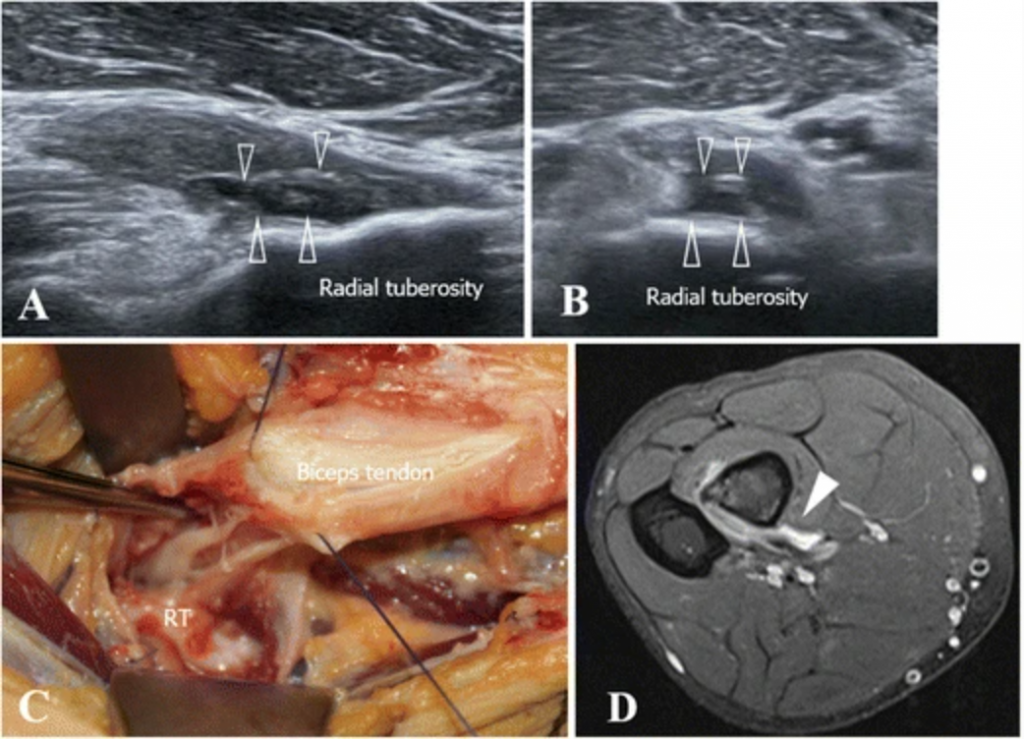 Treatments options depend on severity of injury and nonoperative management may be indicated for partial tears. Nonsurgical management is an option for tendon tears that encompass less than 50 percent of the tendon insertion or in individuals that are not fit for surgical management. Nonoperative management initially focuses on decreasing swelling, inflammation and performing early range of motion exercises. With nonoperative management, a 40% to 50% reduction in supination strength, 30% reduction in flexion strength, and 15% reduction in grip strength can be expected. A discussion with a full understanding of the patient’s activities, comorbidities, activity level, hand dominance, and surgical risk-to-benefit ratio should be performed when making a decision between operative and nonoperative management. In a comparison of strength between patients treated nonoperatively and a historical control group treated operatively, Freeman et al. found that the mean supination and flexion strength in the involved arm compared with that in the contralateral arm was 63% and 93%, respectively, in the nonoperative group and 92% and 95% in the operatively treated group. Both groups had satisfactory outcomes scores [13]. Limited data exists in examining the results of PRP injection to distal biceps pathology. Ultrasound guided PRP injections in cohorts of 6 and 8 patients reported decreased VAS pain scores and significantly increased Mayo Elbow Performance Scores [14-15]. One of these had a follow up at 47 months and no additional procedures and no recurrence of symptoms occurred [15].
Surgical management is typically recommended for complete ruptures or partial tears encompassing more than 50 percent of the tendon insertion. Surgical reinsertion to the radial tuberosity may be achieved through one or two incisions and with different devices. Timing must be carefully considered, since in case of delayed surgery, the tendon is generally retracted proximally and sometimes it is impossible to bring it back to the radius. Ideally, surgery is performed within three weeks of injury. Moreover, the healing process starts early after injury, and scar tissue may obliterate the original location of the tendon making surgery challenging [16]. The ultimate goal is the strongest fixation to allow early movement thus preventing stiffness and HO. Mechanical strength studies have demonstrated that cortical buttons have the best mechanical properties compared with transosseous repair, suture anchors, or interference screws. Intraoperative complications are more frequent after single-incision techniques as a consequence of nerve injuries. HOs are responsible for the majority of unsatisfactory results in the double-incision group. Similarly there is no definitive evidence to support one method of fixation over another. However, laboratory studies have demonstrated biomechanically stronger fixation with cortical buttons or hybrid methods involving cortical buttons and an interference screw [16].

In conclusion, distal biceps tendon tears are a fairly uncommon issue that does affect mostly young males. Sports that require full extension or eccentric loading have risks such as olympic weightlifting, powerlifting, hockey, football or rugby. An audible pop is many times heard along with a burning or pain in the anterior elbow. The combination of the hook test, PFP test and biceps crease interval were found to have excellent sensitivity when used together. An MRI or ultrasound may help differentiate between partial and complete tears and help guide treatment. Some partial tears or nonsurgical candidates may undergo conservative management but should expect some loss of function. Operative management is generally successful in both one and two incision techniques but each carries a risk of complications.

B is the correct answer. This is a young and active individual that has suffered a distal biceps tendon rupture. The reverse Popeye deformity, the positive BCI and PFP test would be very sensitive for diagnosis, especially when paired with the history. Each case would be individualized, but the vast majority of young active individuals would undergo surgical fixation to regain strength and function of his biceps tendon. Nonoperative management is reserved for partial tendon tears and results in some loss of strength and function. The other options would be reserved for partial tendon tears or nonsurgical candidates.