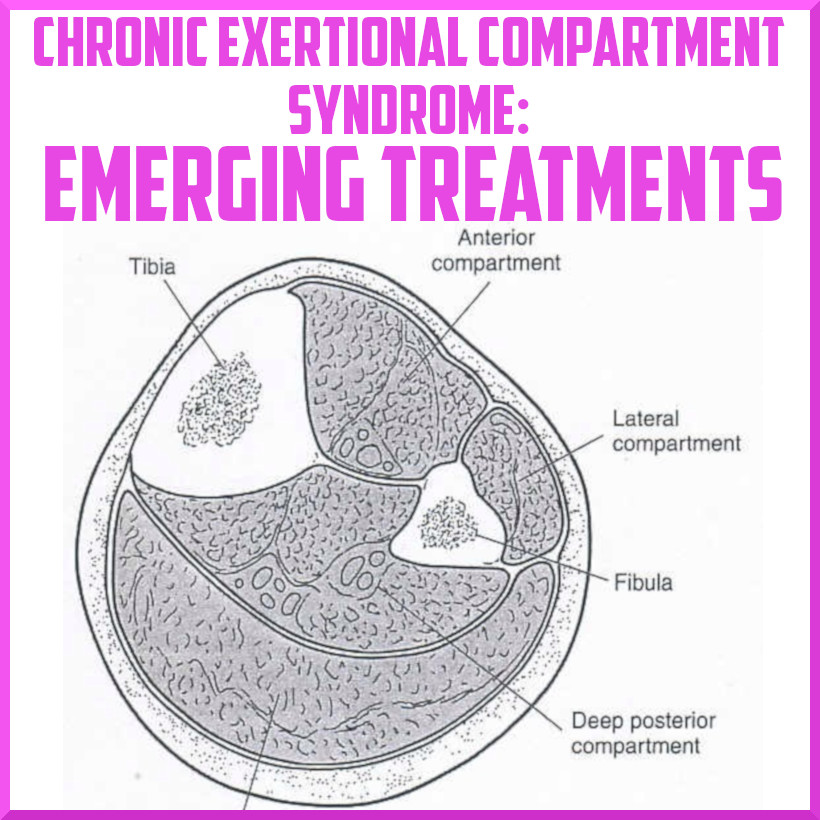 The proposed pathophysiology is increased pressure in muscle compartments during exercise that can result in muscle tightness and pain, which can then advance to paresthesia, muscle weakness, and exercise intolerance. CECS predominantly involves the lower extremities, primarily affects active young adults, and negatively impacts running or other endurance activities

Needle manometry can be used to confirm diagnosis of CECS by measuring intracompartmental pressure.  According to a 2016 systematic review, surgical intervention for CECS was only successful in 66% of those affected, with 13% reporting complications from surgery, and 6% requiring a repeat surgical procedure [1]. Similarly, a 2013 retrospective analysis of military members showed fasciotomy for CECS was successful in 55% of patients.  Additionally, 28% of these patients were unable to return to full activity, 16% suffered surgical complications, and 6% required repeat fasciotomy [2].

Nonoperative management of CECS is more commonly described in the literature, and consists of cessation of activities, altering foot-strike pattern, physical therapy, taping, and injections of botulinum toxin A. Larger samples and a more diverse population are needed to better understand the outcomes of nonoperative management. 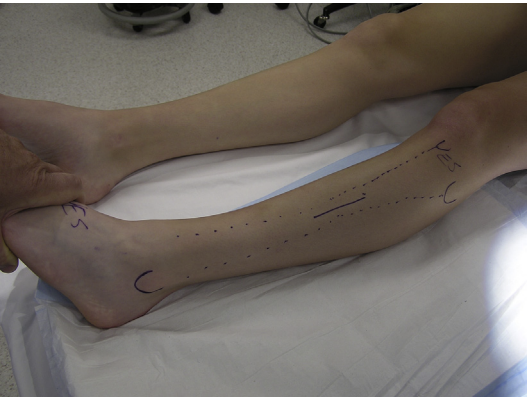 This post will be an evaluation and update on the current evidence for the treatment of CECS with botulinum toxin A.  One of the first reports involved 16 patients and 41 total compartments and showed a significant decrease with elimination of exertional pain in 94 percent of intracompartmental pressures for up to 9 months.  Eleven of the patients (69%) did have a decrease in strength, however [3].

An unpublished retrospective review of CECS patients treated with botulinum toxin A injections at the Ft. Belvoir Military Sports Medicine Clinic shows that 66% (19/29) of the patients returned to their desired activity level. Additionally, 20 patients were satisfied or somewhat satisfied with their treatment, and 12 patients continued to have sustained relief at the time of follow-up. However, seven patients experienced a recurrence of their symptoms with 7.8 months mean duration of improvement. Ninety-one percent (10/11) of patients who underwent both BoNT-A injections and fasciotomy reported a favorable response to  botulinum toxin A before their surgery, suggesting that intramuscular  botulinum toxin A injections for CECS might predict fasciotomy success [4].

Baria and Sellon [5] had similar results when treating a patient diagnosed with CECS with botulinum toxin. Pain following aggravating activity reduced from 9/10 to 1/10 on the visual analogue scale; paraesthesia resolved completely one week post-injection; and no atrophy, weakness, or other adverse effects were identified at 14-month follow-up. Hutto et al. [6] conducted a similar case study in a patient with CECS who showed total pain resolution within two weeks of injection, and no recurrence of symptoms at 10-month follow-up.

A retrospective study has recently been performed on sixteen patients in both the upper and lower extremities.  The median age was 25.5 years and initial efficacy was reported at 69% with four having partial relief and seven having complete relief of symptoms.  However, eight of the eleven patients showing relief had recurrence of symptoms within five months.  Only minor adverse effects were observed [7].

Initial management is almost always nonsurgical.  This normally consists of rest, avoidance of the aggravating activity, NSAIDs and possibly anesthetic or corticosteroid injections.  A diagnostic anesthetic can also confirm the diagnosis.  Mouhsine et al. reported on 19 athletes with os trigonum syndrome. First-line nonsurgical treatment failed. To confirm diagnosis, the patients received an anesthetic injection administered under fluoroscopic control. Ten patients had complete resolution of symptoms after one injection, 6 patients after two injections, and the remaining 3 patients underwent open excision of the os trigonum [9].  Some clinicians will immobilize in a short leg cast or CAM walking boot for one to four weeks and it has been shown to be more beneficial for acute injuries [10].

Another case report evaluated a 30 year old manual worker with a prior forearm fasciotomy for compartment syndrome of the hand.  His symptoms included pain during fine hand motions and pain with minimal effort.  He described difficulty with fine hand motions for ten days and also had an estimated ten percent strength loss after a treatment with botulinum toxin in his first dorsal interosseous muscle and adductor pollici.  He did report complete relief of pain and fatigue at a 15 month follow-up [8].

There is one ongoing study in which plantarflexion and dorsiflexion are being measured and repeated 2 months following a botulinum toxin injection with 50 units into the tibialis anterior.  Symptoms and strength are followed over a 2, 4 and 6 month period [9].

Currently, based on these limited studies, Botulinum toxin is a safe and cost-effective alternative to fasciotomy for the treatment of CECS. In many sports medicine practices, 25 units of onabotulinumtoxinA delivered with ultrasound guidance into the muscle belly at two locations in the proximal and distal thirds of the affected compartment(s) in the anterior, lateral, and deep posterior compartments, for a total of 50 U in each compartment. In the superficial posterior compartment, 50 U of BoNT in the medial and lateral heads of the gastrocnemius and 50 U in the soleus muscle. Gait retraining can also be started along with physical therapy after a few weeks [4].

Ultrasound-guided fasciotomy for CECS is also a newer technique of particular interest to non operative sports medicine providers.  The ultrasound allows for visualization of the superficial peroneal nerve, vessels, and fascia. A cadaveric study was performed with ten anterior and lateral compartments for a total of twenty fasciotomies.  No neurovascular injuries were reported and all achieved target length.   This led to the proposal of an ultrasound guided fasciotomy for CECS [10].  Another study that was similar performed ultrasound-guided fasciotomies in the superficial and deep posterior compartments with target length of 90 percent without tendinous or neurovascular damage [11].

Over a 3-year period, seven patients underwent ultrasound-guided anterior-compartment release.  All patients had decrease in pain and six of seven returned to presymptomatic exercise levels in about 35 days without any hemorrhage or peroneal nerve injury [12].  One other case report exists that describes an anterior leg ultrasound guided release and a return to running in one week [13].

The most successful technique involved using a small incision to dissect down to the fascial plane, which is then pierced using a small surgical blade, such that a blunt tunneling device can be inserted immediately deep into the tissue plane to be divided. Using real-time ultrasound guidance, the blunt tunneling device was then passed adjacent to the fascia for the required longitudinal distance, keeping the tip visualized throughout. When the tip of the blunt tunneler has passed the required distance under the tissue plane, a second small incision is made above the tip so that it may be brought to the skin surface. A 2–0-diameter braided silk suture is then tied to the end of the tunneler before being pulled through, leaving the silk thread deep to the tissue plane. The process is then repeated in the opposite direction with the blunt tunneler passing through the same incisions and passed, again under direct ultrasound guidance, superficial to the tissue plane to be divided.  The silk thread is once again tied to the end of the blunt tunneling device and pulled through so that it now passes immediately deep and superficial to the tissue plane to be divided. The ends of the suture are then oscillated under tension creating a “cheese wire” effect, thus dividing the fascia. Evidence of fascial division could be obtained using ultrasound and was confirmed following open dissection [14]. 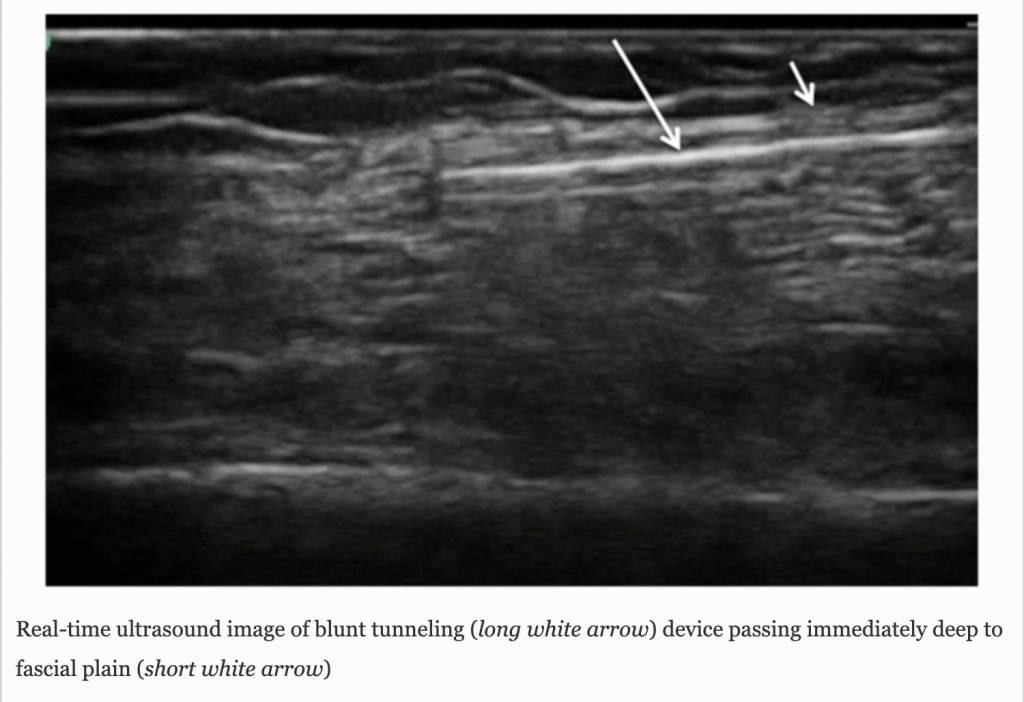 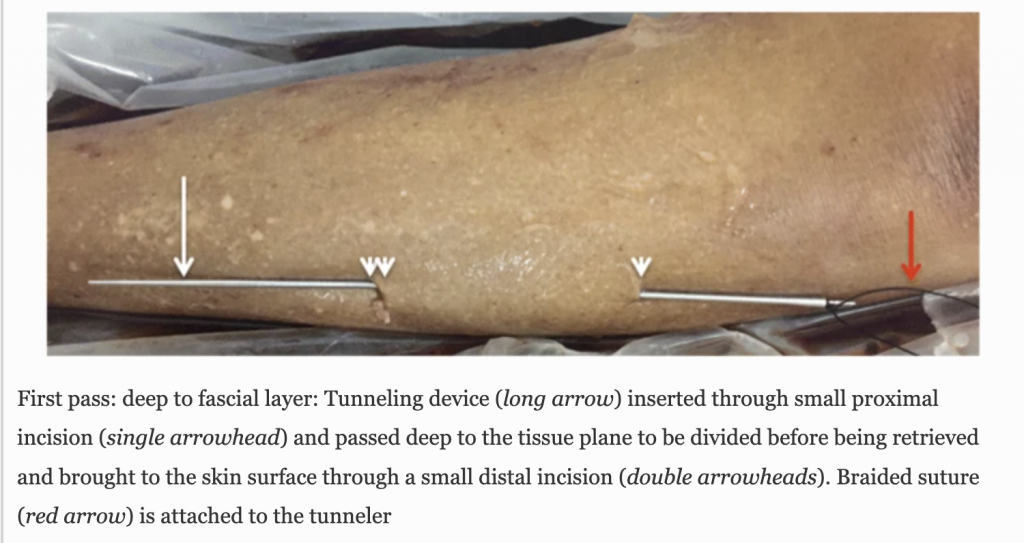 In summary, chronic exertional compartment syndrome (CECS) is often seen in sports medicine clinics due to the population affected.  Providers should be comfortable with the nonoperative treatment options.  Botulinum toxin A has shown positive results in multiple small studies and may be an option, but further research is needed in this area.  The ultrasound guided fasciotomy has been proposed as an additional treatment option for CECS and initial reports have shown positive results and a quicker recovery time when compared to traditional open fasciotomy.