Evidence Behind Corticosteroid Injections of the Foot and Ankle

Previously, we have reviewed CSI of the shoulder region, elbow and wrist and the hip and knee. Last in the series, we will continue to discuss the evidence related to corticosteroid injections by moving distally to the foot and ankle.  As with others, we will cover randomized controlled trials and systematic reviews on corticosteroid injections for issues common to orthopedics such as ankle osteoarthritis, plantar fasciitis and Morton’s neuroma. 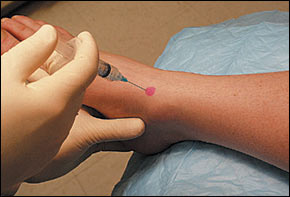 Image 1. Demonstration of corticosteroid injection of the ankle (courtesy of AAFP.org)

Ankle osteoarthritis. Between 6% and 13% of individuals suffer from ankle osteoarthritis which can be a chronic source of ankle pain (Thomas, 2003).  Nearly 70% of ankle osteoarthritis is post-traumatic (Thomas, 2003). Patients will typically present with anterior ankle pain with weight bearing or while pushing off with their foot.  The patient may have limited or painful range of motion. First line treatment usually includes NSAIDs, activity modification, rocker sole shoes and possibly bracing.
There is limited research evaluating corticosteroid injections and ankle osteoarthritis. Most studies have been geared more towards hyaluronic acid or platelet rich plasma. A 2008 study involving 18 patients (6 lost to follow up) with bilateral ankle osteoarthritis had significant improvement after a single injection of 40 mg of methylprednisolone.  Maximum benefit was at 4 weeks and patients reported relief ranging from 6 months to 1 year (Ward, 2008). A study involving children and adolescents with chronic ankle arthritis were injected with triamcinolone-hexacetonide and all 21 ankle joints injected showed improvement at 1 week and 7 weeks with suppression of inflammation and pain without negative effects on cartilage (Huppertz, 1995). 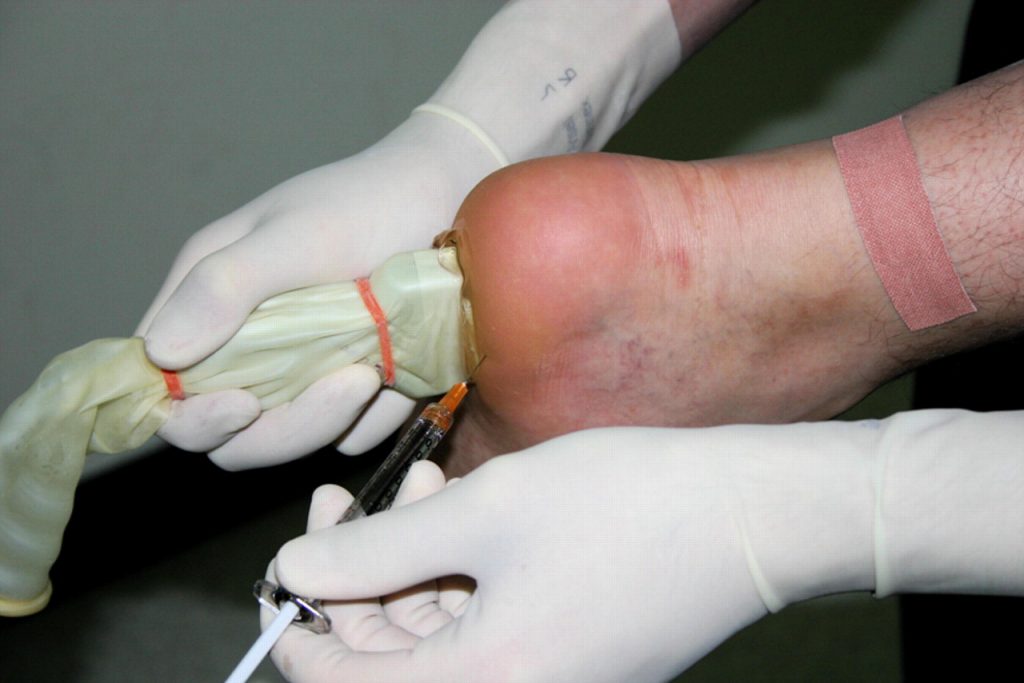 Plantar fasciitis. Plantar fasciitis is a source of foot pain that typically affects adults over 40, with an incidence of around 7% (Clement, 1981). It also accounts for around 25% of all foot disorders in athletes (Cole, 2005).  It is also a common diagnosis among running athletes with an incidence from 8% to 12 % (Knobloch, 2008). Patients usually complain of pain under the heel and medial sole of the foot that is worst with the first steps in the morning or after prolonged sitting or rest.  It can also bother patients with prolonged walking or weight bearing. Tenderness along the origin of the plantar fascia is common and can be exacerbated by toes and ankles in dorsiflexion and diagnosis can usually be made clinically.
A 2017 Cochrane review concluded that there is low quality evidence favoring corticosteroid injections at one month when compared to placebo or no intervention (David, 2017). A 2012 study compared PRP (platelet rich plasma) to corticosteroid injection in 60 patients that failed conservative therapy and showed decreased VAS scores and improved function in both groups at 3 weeks and 6 months.  Both of these methods had comparable results (Aksahin, 2012). One trial with long term ultrasound follow-up showed a decrease in plantar fascia thickness and heel pain after 1 month and 6 months following a corticosteroid injection (Genc, 2005) and another showed relief at 6 months (Kalaci, 2010). One randomized double blind controlled trial with 82 patients showed no difference at one and two months (Abdihakin, 2012). In several studies, ultrasound guidance was not superior to palpation guided injections (Kane, 2001; Gill, 1996).  It has been shown to be a relatively safe procedure, but there was plantar fascia rupture in 2/699 patients where adverse reactions were reported (David, 2017). 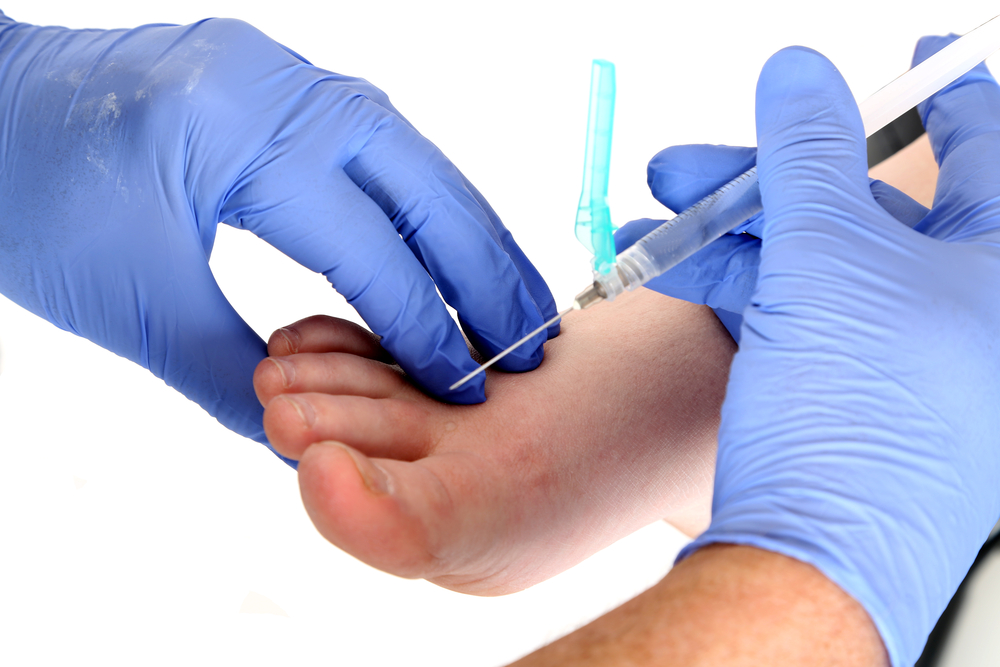 Morton’s neuroma. Morton’s neuroma, an interdigital neuroma with unclear etiology, causes paroxysmal neuralgia and a common cause of forefoot pain.  It presents in most cases with sharp burning pain in the web space and involves the third and fourth toes around 80% of the time (Singh, 2005).  Physical exam may reveal a clicking sensation (Mulder’s sign) when palpating the involved interspace while simultaneously squeezing the metatarsal joints. There may also be tenderness to palpation between the wb spaces.  Ultrasound and MRI have been used to confirm the diagnosis, although diagnosis can be made clinically in most cases.  Nonoperative and noninvasive management is first line treatment including treatment with orthotics and adequate footwear modifications.
A 2004 Cochrane review concluded there was insufficient evidence to recommend corticosteroid injections for Morton’s neuroma due to lack of well-designed randomized studies.  More recent studies have generally shown favorable results. One patient-blinded study with 131 patients underwent an ultrasound guided corticosteroid injection and global assessment of foot health including pain and function was improved at both one and three months (Thomson, 2013).  A 2008 trial with 35 patients that underwent a single ultrasound guided corticosteroid injection had 66% percent of patients report complete satisfaction or satisfaction with minor reservations at 9 months (Markovic, 2008).  Another 2007 study with 54 patients showed similar results with 67% satisfaction with treatment using the Johnson Satisfaction Score and 63% reported no limitations at 9 months (Hassouna, 2007).  Ultrasound was also shown to be effective in targeting and characterizing Morton’s neuroma and showed a 76 % cure rate at 7 days following corticosteroid injection (Sofka, 2007).  One recent randomized-controlled trial showed no difference at 3 and 6 months following corticosteroid injection compared to local anesthetic in 41 patients in terms of pain and function (Lizano-Díez, 2017).  Adverse reactions are rare but the dorsal approach is preferred due to decreased risk of metatarsal fat pad atrophy (Wu, 1996). 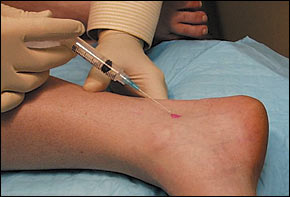 Image 4. Demonstration of corticosteroid injection of the tarsal tunnel (courtesy of AAFP.org)