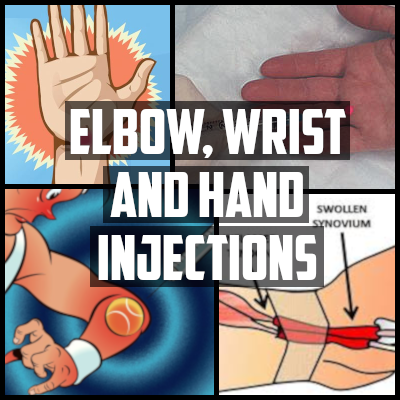 Evidence Behind Injections on the Elbow, Wrist and Hand

After reviewing corticosteroid injections of the shoulder region, we will now move distally down the arm and into the elbow, wrist and hand. This article will cover some of the randomized trials and reviews on corticosteroid injections for some of the most common issues that present to a sports medicine practice including lateral and medial epicondylitis, de Quervain’s tenosynovitis, trigger finger, carpal tunnel syndrome.

Lateral epicondylitis, or tennis elbow, is the most common disease of the elbow affecting 1-3 percent of the population 1. It is typically due to repetitive strain to the extensor tendon, notably extensor carpi radialis brevis (ECRB), or by forced extension or direct trauma to the lateral epicondyle. The term epicondylitis was proposed in 1936 and was challenged in the 1970s. Over 600 cases of chronic epicondylar pain showed dense population of fibroblasts, disorganized and immature collagen, and an absence of inflammatory cells 33. These findings are considered characteristic of a degenerative process, which was called ‘‘angiofibroblastic hyperplasia,’’ now commonly known as tendinosis. More recent histology has been similar and it has been suggested to alter the name to terms such as epicondylosis or epicondylalgia and refer to this more as a tendinosis, as opposed to a true tendonitis 33. However, the term epicondylitis and tendonitis remain the most common terminology.

Conservative treatment typically includes rest, avoidance of aggravating activities, modification of behavior, physical therapy and analgesic medications. There are variable practice patterns in the use of corticosteroid injections for lateral epicondylitis among practices and some physicians will offer an injection on the first visit. The literature for CSI does not provide conclusive evidence over which corticosteroid, the exact volume, the exact area of injection (at the point of maximum tenderness or at anatomical position) or the injection method. One study showed no difference between hydrocortisone 25 mg to be equivalent to triamcinolone 10 mg. Many practices use 20-40 mg of triamcinolone today.

A couple more recent studies showing limited long term benefit and high recurrence have brought this practice into question 2,3. A meta-analysis by Coombs et al. in 2010 concluded that corticosteroid injection for lateral epicondylitis achieved favorable short-term results (3-8 weeks). However, at 6 months and 1 year, pain had returned. In fact, patients who received corticosteroid injections reported worse pain than patients who received other interventions, such as nonsteroidal antiinflammatory drugs, physical therapy, platelet-rich plasma injection, or no treatment 1. Another randomized controlled trial in 2013 showed a single, blinded injection of corticosteroid medication was associated with poorer long-term outcomes and higher recurrence rates 1 year after receiving an injection in patients with unilateral lateral epicondylalgia. It also showed eight weeks of multimodal physiotherapy, comprising elbow mobilization with movement and exercise, did not optimize long-term outcomes, but was beneficial in the short-term in the absence of corticosteroid injection 4. More recent studies have been aiming to compare other types of injections such as PRP or sclerosing agents due to this data. These studies have echoed similar studies in regards to corticosteroids, which seem to provide benefit in the short-term, but show no evidence of benefit beyond 3-12 months. Corticosteroids have been shown to be more effective in short term pain relief and produced greater reduction in tendon thickness and vascularity when compared to autologous blood or saline 6,9.

Medial epicondylitis, or golfer’s elbow, is less common and affects around 0.5% of the population. It is provoked by frequent eccentric loads on the muscles that are responsible for forearm pronation and wrist flexion. This repetitive stress leads to microtrauma of the common flexor tendon and debilitating, chronic pain at the epicondyle. There are fewer controlled trials investigating the utility of corticosteroid injections on the medial epicondyle, but similar results have been shown. A 1997 study with sixty patients showed pain relief at 6 weeks, but no significant change at three months or one year 10. Most providers proceed with caution with injections in the medial epicondyle with corticosteroid due to the high recurrence rate with lateral epicondylalgia.

Due to the current understanding of epicondylosis and high recurrence rate with anti-inflammatory treatment, approaches have shifted toward novel biological therapies aimed at tendon regeneration rather than inflammation or pain control 11. One particular study with autologous blood injection along with dry needling was found to be effective with respect to reducing pain and improving function in 17 out of 20 patients over a 10-month follow-up period, with improvement seen as early as 4 weeks 12. 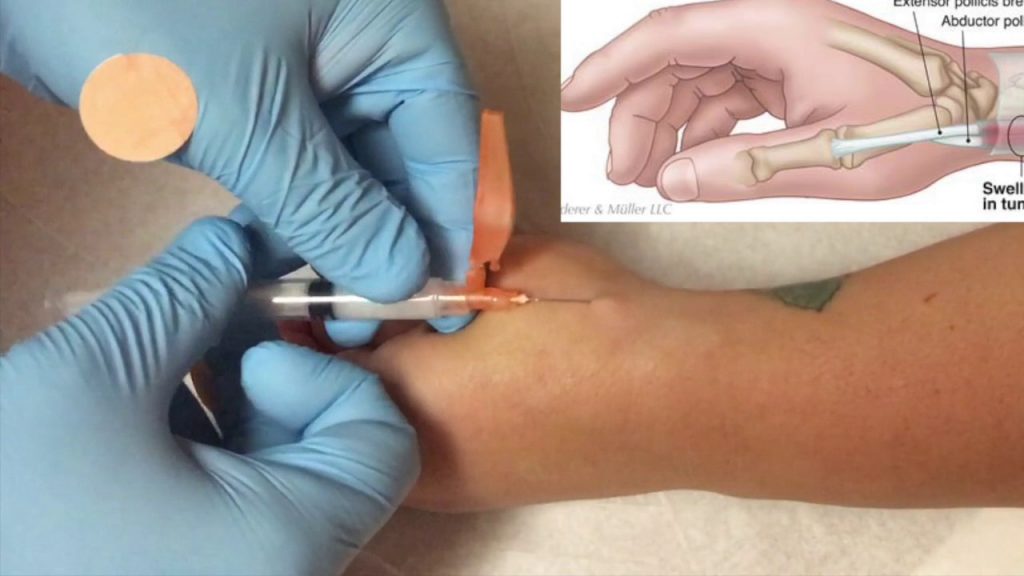 DeQuervain’s tenosynovitis is a stenosing tenosynovitis of the first extensor compartment of the wrist, which involves the abductor pollicis longus (APL) and extensor pollicis brevis (EPB) tendons. It is common among the working population and new mothers and can affect athletes as well. Some providers will offer conservative therapy can be attempted using splinting, rest and physical therapy before offering a corticosteroid injection.

In a systematic review of the effectiveness of corticosteroid injection for de Quervain’s tenosynovitis, which included seven observational studies with a total of 459 wrists, 83% of the 226 wrists that received injection alone were cured, 61% of the 101 wrists that received injection and splint immobilization were cured and 14% of those who received splinting alone were cured 13. A systematic review in 2009 only included one study with 18 pregnant and lactating women and all nine of the women injected with 10 mg of methylprednisolone has complete resolution of pain 14, 15. One recent study showed improved accuracy and greater relief with ultrasound guidance in forty-four wrists at 4 weeks 16. A similar study was done in 2012 that showed at least partial relief of symptoms with patients undergoing an ultrasound guided injection into the first compartment in 36 out of 37 patients and a fourteen percent recurrence rate. These patients were found to have sub compartments via ultrasound 17. Sub compartments can be defined as the EPB and APL tendons running either completely or partially along a separate sub compartment within the first extensor compartment. Another 2018 study used an anatomical approach using stages of sub-compartmentalization and targeting the EPB tendon and had a 96% (23/24) success rate defined as >80% reduction in pain with a one month follow up 18. Ultrasound guidance should be used if available to ensure the highest chance of success when injecting corticosteroid.

Trigger finger can be defined as a triggering or locking of a digit caused by histological changes in the A1 pulley that prevent smooth motion of the flexor digitorum profundus and flexor digitorum superficialis tendons. Rheumatoid arthritis, diabetes mellitus, carpal tunnel syndrome, and de Quervain tenosynovitis are associated with trigger finger. It remains one of the most common hand disorders treated by orthopaedic physicians,with a lifetime risk estimated at 2.6% in the general population and 4% to 10% in patients with diabetes 19. Conservative treatments, including activity modification, splinting, physiotherapy, and non-steroidal anti-inflammatory drugs (NSAIDs) have been described, but the mainstay of nonoperative treatment remains corticosteroid injection.

Literature supporting corticosteroid injections were published in the 1970s, 80s and 90s with a success rate between 64 to 84 % after one to three injections 20. A study done on long-term follow up showed 45% of patients demonstrated long-term success after a single injection up to 15 years. Female non-diabetic patients had the highest rate of success at 56%. Eighty-four percent of treatment failures occurred within the first two years following injection 20. Another randomized controlled trial with fifty patients showed less pain and less triggering with corticosteroid injections and lasted up to 12 months 21. Head to head trials comparing injection versus surgery are limited but have shown surgery cure rates to be around 100%. Hansen, Sondergaard and Lang performed a study comparing ultrasound guided injections for trigger finger versus open release in 165 patients with follow up at 3 and 12 months 22. About 86% in the injection group had normal finger motion at 3 months compared to 99% in the surgery group. Surgery was superior again at 12 months with cure rates 99% compared to 49% with the injections. Complications were more severe in the surgery group with one nerve lesion and three superficial infections 22. There is no strong evidence on which steroid to use, but triamcinolone is most common 23. There is also one study showing increasing success with up to three injections 24. 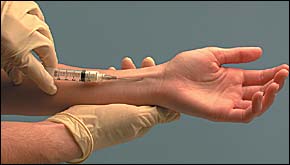 Carpal tunnel syndrome is caused by compression of the median nerve as it passes through the carpal tunnel. It is the most common entrapment neuropathy, affecting 5% of women and 2% of men in the general population 25. Conservative therapy includes oral medications including NSAIDs and steroids, activity modification, occupational therapy and wrist splints. These therapies are effective for short term relief in many patients 25.

Corticosteroid injections have been shown to improve short-term outcomes in many studies when compared to placebo or oral medications 26, 27, 28, 29, 30 and a systematic review in 2007 showed superior clinical improvement at one and three months when compared to oral corticosteroids 28, 29. One study concluded that two injections are not superior to a single injection in forty-two patient during a prospective double blind study 31. Ultrasound guidance was also shown to improve pain scores during injection and clinical outcomes at 2 weeks and 6 months 32. Long-term data is sparse, but studies have shown limited effectiveness beyond six months to one year 25. There can also be up to a 50% recurrence rate and many patients do eventually undergo surgical treatment. Many patients that want to avoid or prolong surgical intervention for carpal tunnel syndrome can be offered corticosteroid injections with the understanding it will provide short term relief and long term studies are sparse and there is a high chance of recurrence.

Overall, providers should proceed with caution when offering corticosteroid injections for epicondylitis, especially if concern for the more chronic form of epicondylosis, due to high recurrence rate and limited long term success. There is stronger data in regards to De Quervain’s tenosynovitis, carpal tunnel syndrome and trigger finger injections and should be offered as treatment in patients looking to avoid surgery. Ultrasound guidance should be considered for carpal tunnel and De Quervain’s tenosynovitis injections if available.