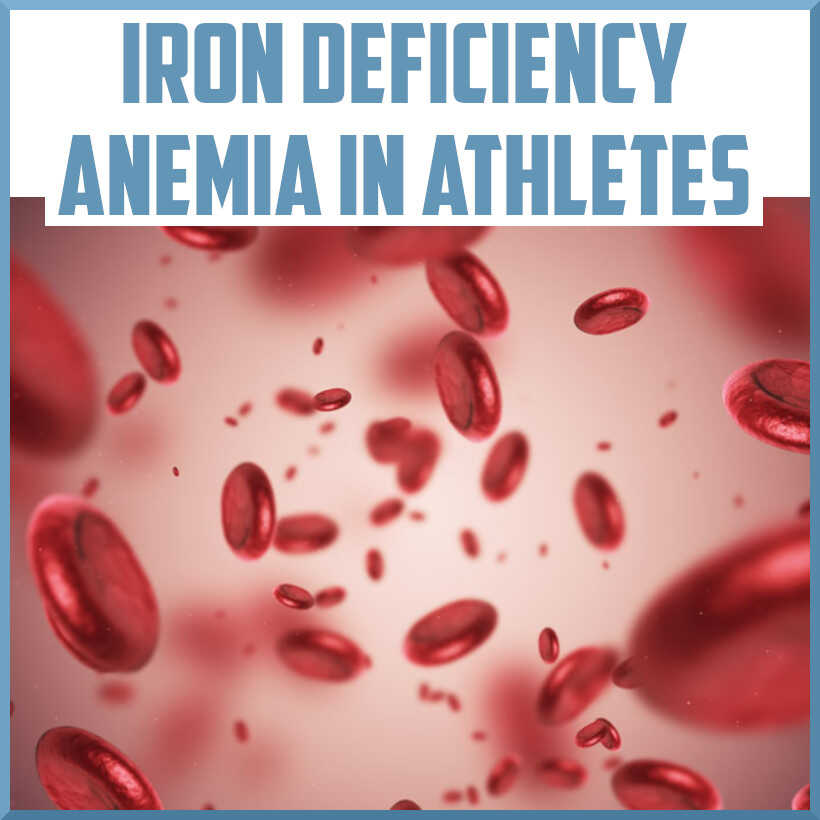 Iron Deficiency (ID) is a spectrum of disease common in athletes, especially among females and those that participate in endurance sports. There are two forms of ID: iron deficiency non anemia (IDNA), defined by decreased iron stores, and iron deficiency anemia (IDA), which is defined by a drop in iron stores and hemoglobin. Generally speaking, this is due to iron losses exceeding iron intake and absorption. Early on in the disease, athletes will have ID with normal hemoglobin levels, while in later or more severe phases of the disease they will develop IDA.

A 23 year old female track athlete at a division 1 university presents with increasing fatigue and decreasing performance over the last few months of training. She is a vegan but has met with a dietician who told her she was consuming enough calories. There have been no changes in her training program. She has no history of stress fractures and has a normal body habitus. Her point of care glucose is normal. Which of the following is the most likely diagnosis?

Iron deficiency is fairly common among athletes, ranging from 15-35% among females and 3-11% among males (Sim 2019). IDA is far less common, seen in 0-2% of all athletes but has been reported as high as 15% among female athletes (Garza 1997). It is important to consider other causes of fatigue, malaise and decreased exercise performance. Examples would include relative energy deficiency in sport, female athlete triad, hypothyroidism, diabetes, overtraining syndrome, sleep dysfunction and depression among many others.

Iron is a critical component of heme formation, the protein chain responsible for carrying oxygen on hemoglobin. There is a direct correlation between iron stores, arterial oxygen content and maximal contractility of skeletal muscle. Ferritin is a storage protein which accurately reflects total body stores of iron and is a reliable marker of iron deficiency. It is worth noting that ferritin is an acute phase reactant which can be elevated following exercise or other inflammatory conditions. Hepcidin is a hormone which regulates iron metabolism. Hepcidin increases following exercise and while elevated, impairs iron absorption in the gastrointestinal mucosa (Peeling 2009). It is also worth noting that calcium can inhibit iron absorption while vitamin C can increase non-heme iron absorption by up to 300% (Diaz 2003).

Image 1. The consequences of iron deficiency (adopted from http://dgscctf.com/)

Iron is not synthesized by the human body and must be replenished by dietary intake. Dietary iron is difficult to replenish even in the non-athlete. Heme iron, which comes from animal-based foods has a bioavailability of 15-35% while non-heme iron from plant-based sources has a bioavailability of 2-20%. This puts vegetarians at increased risk of ID (Björn-Rasmussen 1974). The recommended daily intake is 8 mg/day in males and 18 mg/day in pre-menopausal adult women.

Athletes are considered more susceptible due to increased iron requirements. This is primarily due to hematological adaptations to training and sport requiring an increased oxygen demand. Iron loss can also occur due to sweating, hematuria and GI bleeding which may seem insignificant but can be cumulative over time (Gaudin 1990). Foot strike hemolysis has also been implicated. In women, blood loss from menstruation (Fallon 2008) and decreased iron consumption have also been cited as contributing factors (Nickerson 1989). Iron deficiency non-anemic athletes typically are asymptomatic. When anemia is present, athletes will report lethargy, fatigue, weakness and shortness of breath. They will often note a decline in exercise performance, reduced work capacity and inability to adapt to training stress (Haas 2001). Physical exam may be normal. Pallor of skin and conjunctiva may be present but is not a reliable clinical indicator in mild anemia.
Athletes who should be tested are athletes experiencing an unexplained decrease in performance, individuals consuming a vegetarian diet and athletes with a previous history of iron deficiency. Normal hemoglobin values are < 13 g/dL in males, < 12 g/DL in females. Normal ferritin is at least > 12-20 ng/mL globally, > 90 ng/mL in men and > 25 – 30 ng/mL in females. In athletes with IDNA will have normal hemoglobin and low ferritin while athletes with IDA will have low hemoglobin and low ferritin. What Is less clear is which athletes require screening. Generally accepted is female athletes and males endurance athletes competing at an elite level. 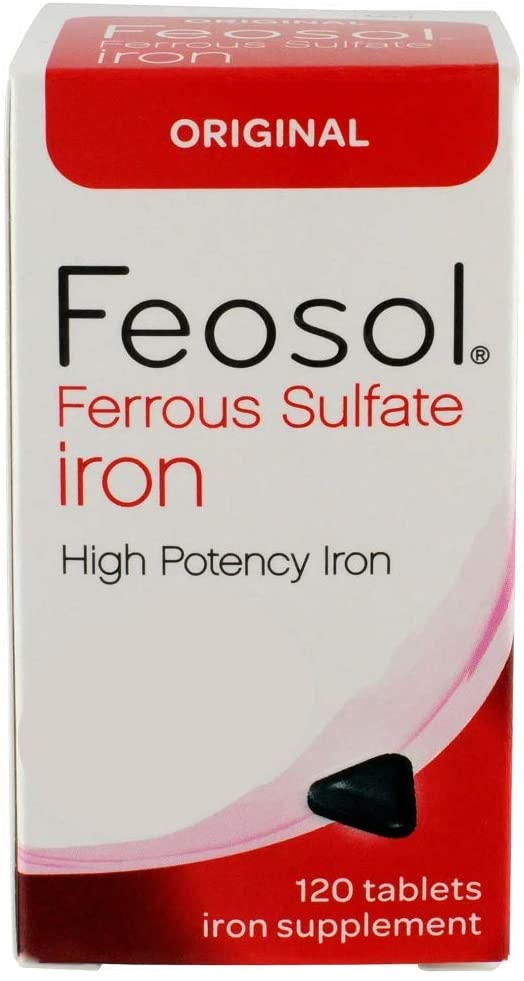 Treatment is primarily aimed at iron supplementation and is generally an oral route. Indications for treatment are any degree of anemia and ferritin below normal cutoffs. Ferrous sulfate is most commonly given at 100 mg per day which is shown to increase athletes’ iron stores 30-50% over 6-8 weeks (Fogelholm 1992). The biggest side effect is gastrointestinal distress which makes compliance challenging (Tolkien 2015). The best available evidence says that to avoid this GI toxicity, athletes should take 100 mg every other day and will still have a similar increase in iron stores with less total iron ingested (McCormick 2020). To maximize absorption, athletes should consume their supplement in the morning, 30 minutes prior to exercise to help potentiate absorption (McCormick 2019). There are other oral formulations which are less commonly used but may be promising for future management.

Parenteral iron can be administered intramuscular (IM) or intravenous (IV). It is effective because it bypasses the gut and the GI side effects and can rapidly increase iron stores in a shorter period of time than oral. Indications include athletes with severe ID or IDA, those who need rapid improvement in iron stores, when athletes can not tolerate gastrointestinal complications or when an oral treatment has failed and anemia has progressed. Transdermal patches represent another option for bypassing the GI tract although the literature and formulations thus far have failed to show much benefit (McCormick 2020). Finally, prevention is the best treatment and athletes should be encouraged to eat foods rich in heme iron and non-heme iron.

In summary, iron deficiency non-anemia (IDNA) is highly prevalent in athletes, especially among females and endurance athletes. When the hemoglobin begins to decline and the athletes are symptomatic, it is referred to as iron deficiency anemia (IDA). Symptoms include fatigue and shortness of breath and athletes will exhibit a decline in performance. On laboratory evaluation, both ferritin and hemoglobin will be decreased. It is important to consider alternative diagnoses as well. Treatment involves oral supplementation of ferrous sulfate 100 mg. The best available evidence says to use alternate day dosing to avoid the GI distress and to take it in the morning, 30 minutes before exercise to maximize absorption.
Read More: https://wikism.org/Iron_Deficiency_Anemia

Answer A is the correct answer. This vignette is most consistent with iron deficiency anemia. The fatigue and decreased performance could be attributable to any of the answers. A normal blood glucose excludes diabetes. Overtraining syndrome and relative energy deficiency in sport are unlikely given the correct calorie intake, no changes in her training, no other stress related injuries and a normal body habitus. Her symptoms, sport of choice, gender and choice of veganism put her at high risk of iron deficiency. Because of the decrease in performance and fatigue she is likely anemic at this point. The patient needs serum hemoglobin and ferritin levels checked and perhaps a further workup if the diagnostic picture is unclear.