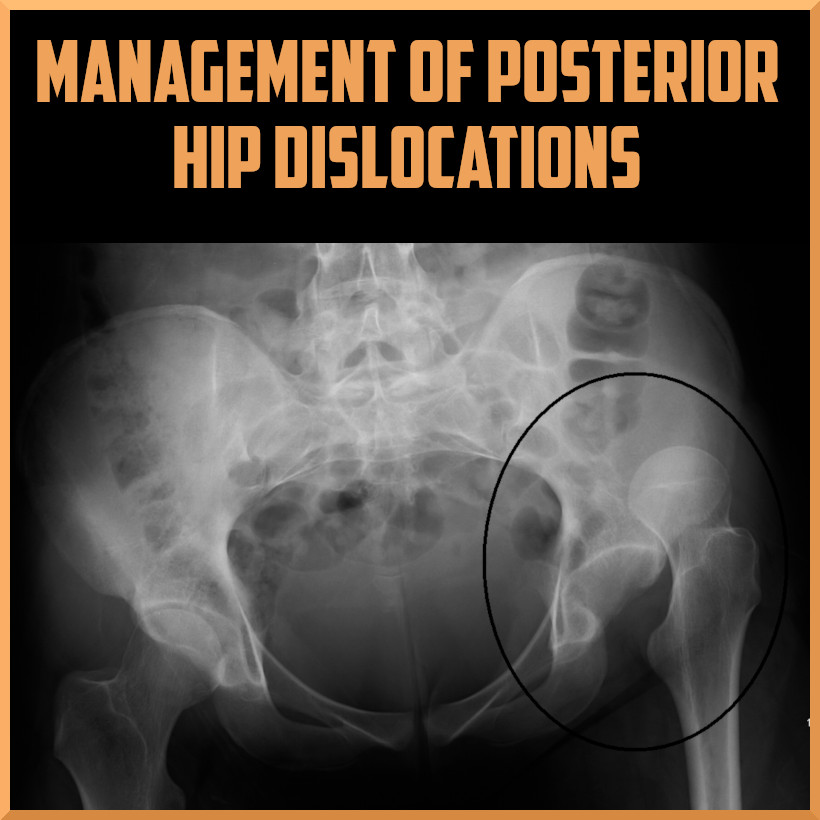 Hip dislocations are uncommonly encountered in athletes but they do occur. Famous examples include American football players Tua Tagovailoa and Bo Jackson. Other sports with case reports of dislocations include skiing, snowboarding, rugby and basketball.[1]Giza E, Mithöfer K, Matthews H, Vrahas M. Hip fracture-dislocation in football: a report of two cases and review of the literature. Br J Sports Med. 2004;38(4):E17. doi:10.1136/bjsm.2003.005736 More than 90% of dislocations are posterior. There are two mechanisms that can produce a posterior dislocation: a forward fall on a flexed, adducted knee producing a posterior force or a blow from posterior to anterior while the athlete is on their hands or knees. 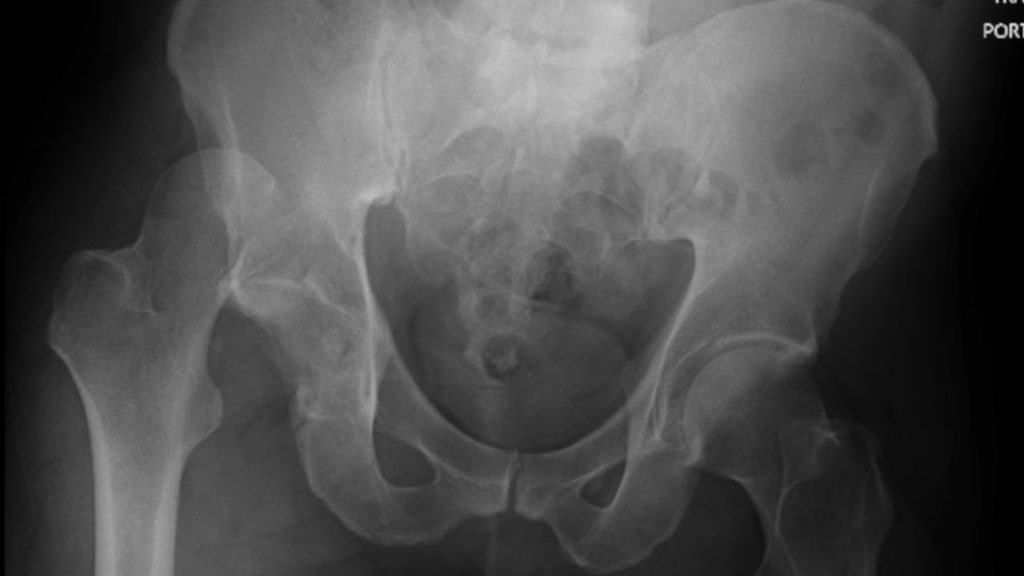 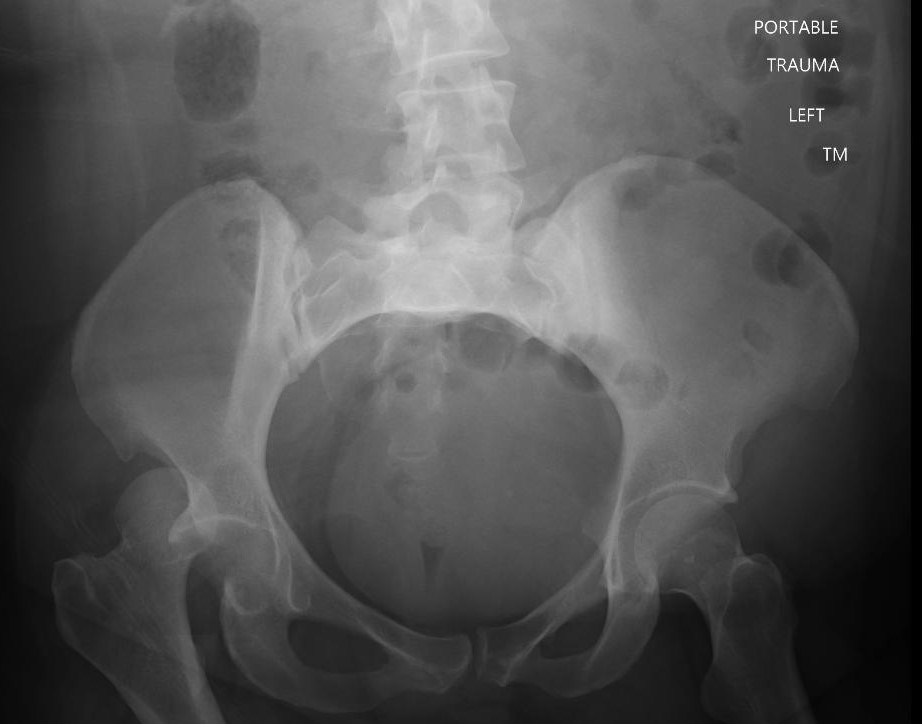 In a posterior hip dislocation, the athletes leg will be adducted, internally rotated and shortened. It is not possible to tell if there is a fracture vs dislocation or both, although a careful examination help direct an index of suspicion. In most cases, the patient will be transported to the hospital where radiographs should be obtained prior to reduction. Because of the large muscle groups around the joint, reduction typically requires procedural sedation to relax the musculature. There are multiple reduction techniques which will be reviewed.
Time to reduction is critical as hip dislocations are associated with a high rate of avascular necrosis which directly correlates with duration of dislocation. Depending on associated injuries, AVN risk is as high as 50% and 25% of dislocations will go on to develop osteoarthritis.[2]Dwyer AJ, John B, Singh SA, Mam MK. Complications after posterior dislocation of the hip. Int Orthop. 2006;30(4):224–227. doi:10.1007/s00264-005-0056-9 Other potential sequalae include a need for total hip arthroplasty, myositis ossificans, labral tears and sciatic nerve injuries.

Because they are infrequently encountered, there is no clear rehabilitation or return to play guidelines. Assuming no complications, the athlete can begin functional weight bearing around 4 weeks. Jogging or running typically begins at 6-8 weeks. Rehabilitation should be performed under the supervision of an athletic trainer and/or physical therapist. Return to play occurs around 6 months, although this may be delayed if any surgical intervention was required.

Although the Captain Morgans technique is the most commonly taught, there are multiple techniques described in the literature. There is no best technique. These images and review are courtesy of Dr Gottlieb and his paper “Gottlieb, Michael. “Managing Posterior Hip Dislocations.” Annals of Emergency Medicine (2022).” 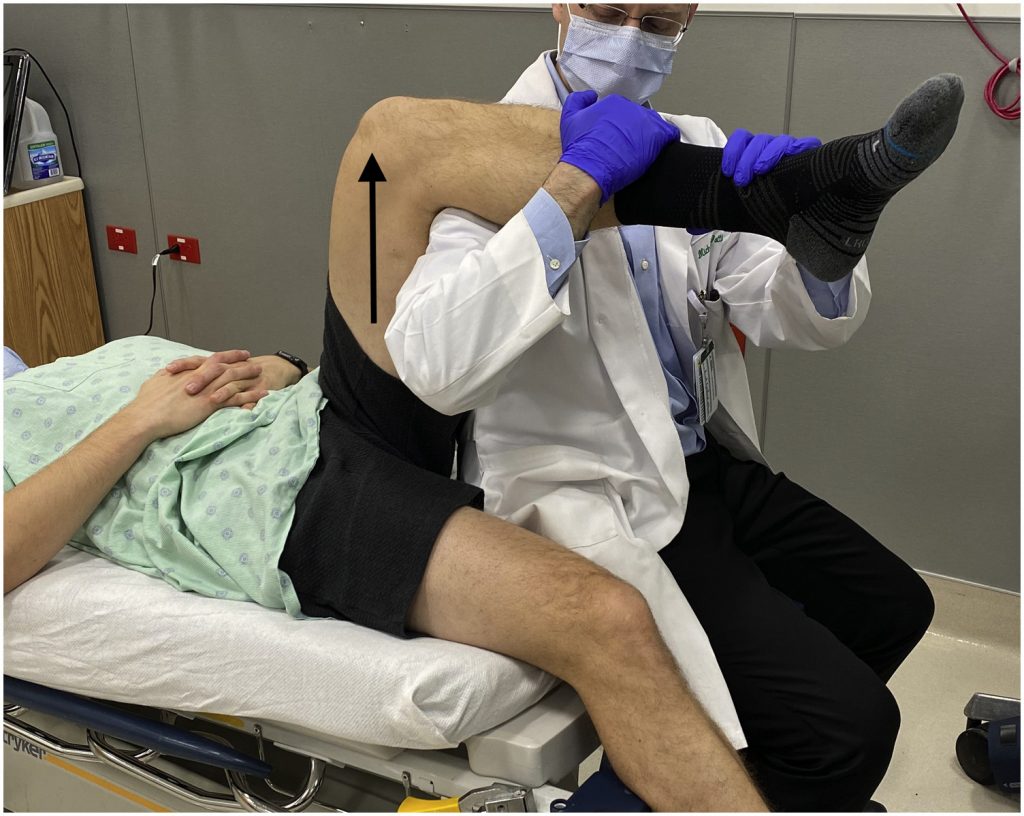 In the piggyback technique, the patient is supine at the end of the bed with their hip and knee flexed at 90°. The physician places the patient’s knee over their shoulder and slowly leans forward and stands up while guiding the thigh into adduction. This can be modified using the “rocket launcher” approach where the physician adducts and internally rotates the hip to exaggerate the deformity before standing up. 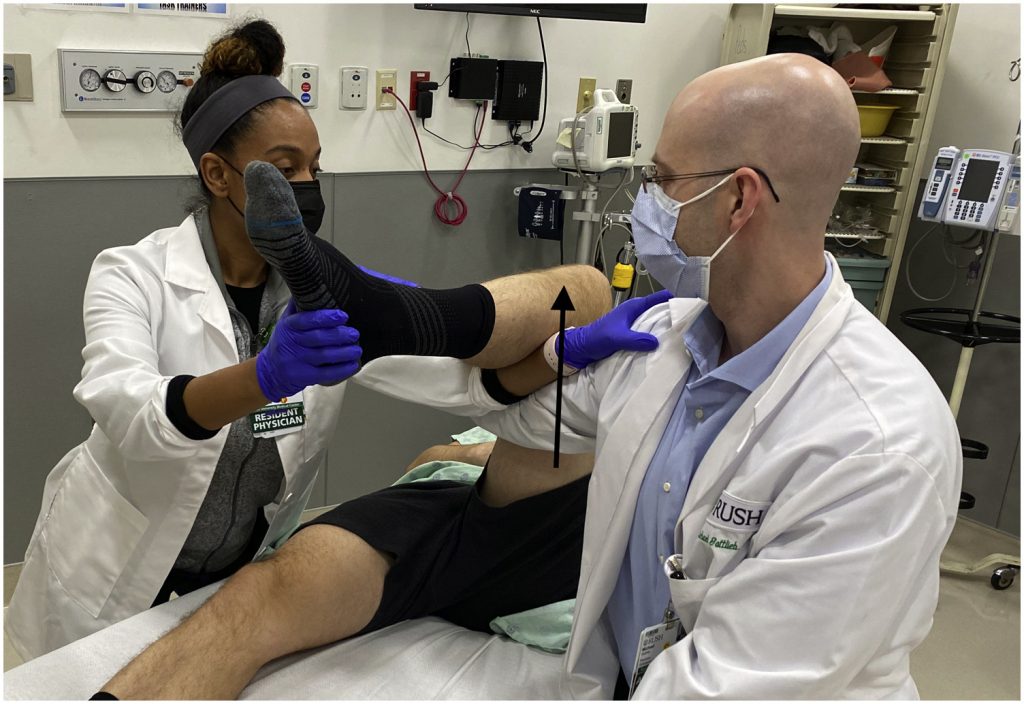 This is a two-physician technique, one on each side of the patient, with the patient laying supine. The hip and knee are flexed at approximately 90°, with the physicians’ locking arms underneath the patient’s knee, while stabilizing the knee at the ankle joint. The bed should be sufficiently low such that both clinicians’ backs are straight, and their knees are bent at approximately 45°. The pelvis should be stabilized. Both physicians then stand up slowly, applying axial traction to the femur while gently internally and externally rotating the hip via the ankle. 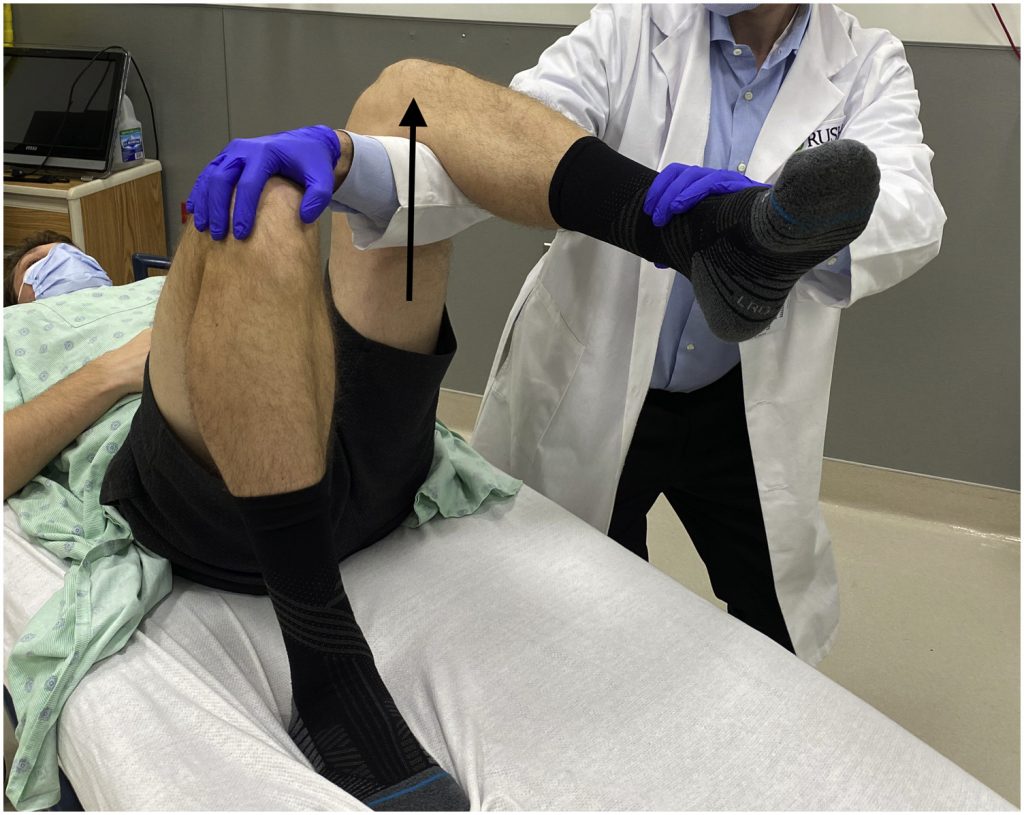 The patient is supine with both knees and hips flexed. The physician places their arm underneath the knee on the ipsilateral limb and their palm on the contralateral knee. The bed should be sufficiently low such that the clinician’s back is straight, and their knees are bent at approximately 45°. The physician slowly stands up, using their arm to provide axial traction on the hip, while their other arm gently internally and externally rotates the leg. 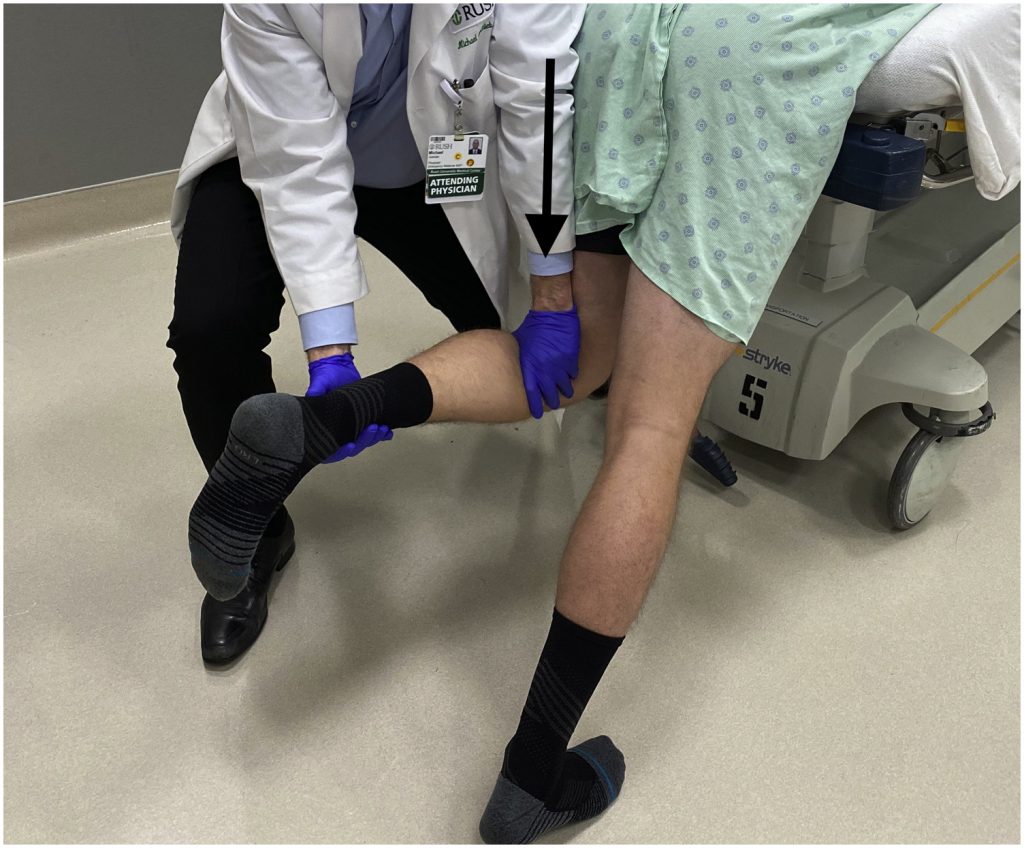 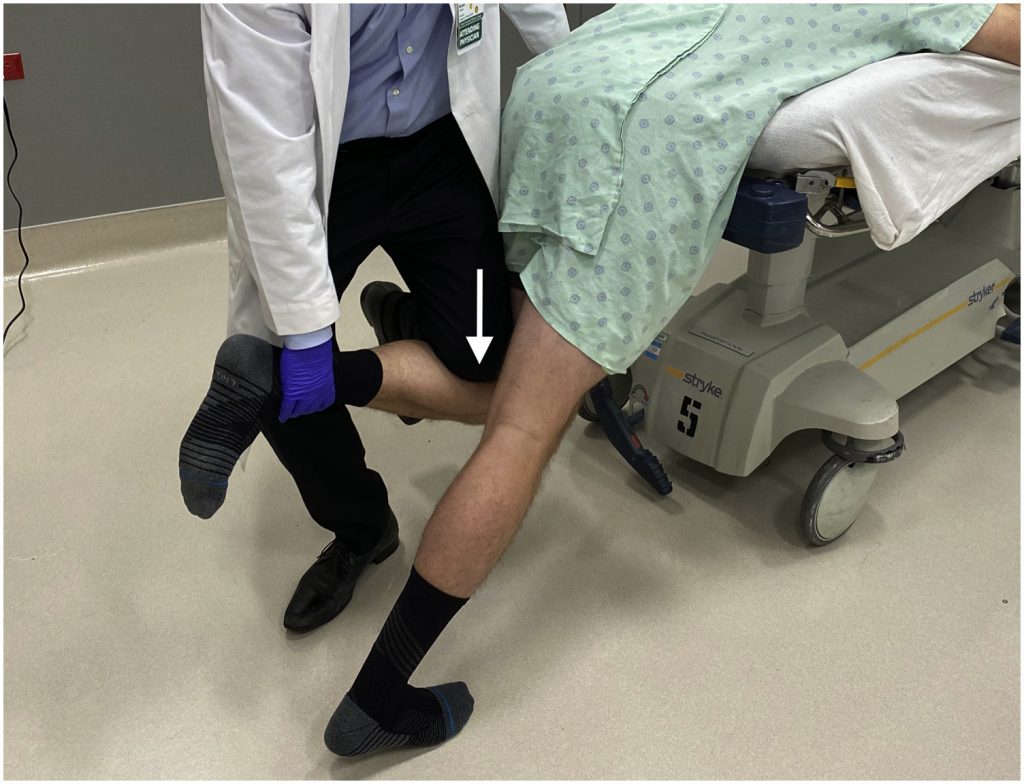 The patient is prone, affected leg flexed to 90° and hanging off the end of the bed. The patient’s hip and knee are flexed to 90°, while the clinician applies a downward force to the lower leg with one arm while internally and externally rotating the patient’s hip with their other hand
In the modified version, the physician places their knee on the proximal calf near the popliteal fossa and slowly transfers their weight to the bent knee.
– More Hip Pain from Sports Medicine Review: https://www.sportsmedreview.com/by-joint/hip/