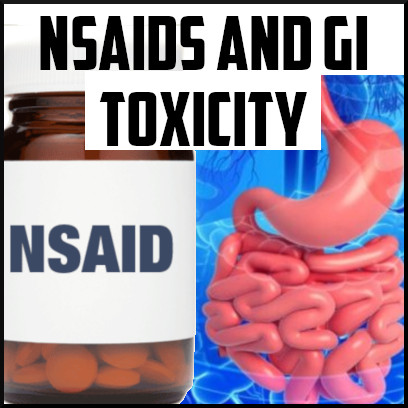 In part 2 of this Non-Steroidal Antiinflammatory Drugs (NSAIDS) review, we’ll review the risk of gastrointestinal complications. In our previous article, we discussed cardiovascular disease and NSAID use. Here we will review gastrointestinal complications. As discussed previously, NSAIDS are one of the most commonly used drugs in the world and their use is increasing in the US and globally. In 2013, NSAIDs had accounted for more than 70 million prescriptions and 30 billion over-the-counter purchases [1]. Sports medicine physicians should be cognizant of potential complications, especially gastrointestinal toxicity. Awareness can lead to better prescribing practices and increased safety for at-risk patients.
NSAIDS cause gastrointestinal injury by reducing availability of the prostaglandin substrates leading to mucosal injury. Inhibiting COX-1 blocks “production of prostaglandins that play an important protective role in the stomach by increasing mucosal blood flow and stimulating the synthesis and secretion of mucus and bicarbonate, as well as promoting epithelial proliferation” [2]. This leaves the gastrointestinal mucosa vulnerable to acid secretion, digestive enzymes and acidic diet which all contribute the development of gastrointestinal complications from NSAID use. COX-2 mediated prostaglandin inhibition primarily targets the anti-inflammatory cascade of the prostaglandin cycle, sparing COX-1 inhibition and reducing the risk of GI toxicity. This lead to the development of selective COX-2 inhibitors such as celecoxib.
Although many athletes may not be at high risk of GI complications, many patients with orthopedic injuries or illness are. In one study of patients with osteoarthritis, 86.6% were at increased risk of GI toxicity and 22.3% were at high risk. Evaluation of GI risk includes determination of the presence of well-known risk factors such as age greater than 60, severe illness, H. pylori infection, previous history of GI bleeding, complicated or uncomplicated peptic ulcer and/or GI symptoms (dyspepsia), high risk surgical history including bariatric procedures, the use of high-dose NSAIDs, the combination of two NSAIDs including low-dose aspirin, or the concomitant use of NSAIDs and anticoagulants or corticosteroids [3, 4].
Use of NSAIDS increases the risk of gastrointestinal complications by 3-5 fold compared to non-users [5]. The first two months of use may be the period of greatest risk [6], however risk remains elevated afterwards if treatment is continued. Patients experience upper GI complications at a rate of approximately 6 times more frequently than lower GI tract. The rate of lower gastrointestinal complications are less well characterized but thought to be increasingly common [7].
The first category of adverse events are symptom related. Patients may report multiple symptoms related to NSAID use including heartburn, dyspepsia, reflux, abdominal pain, nausea and vomiting. Between 40 and 60% of NSAID users will report at least one of these symptoms and they do not reliably predict future complications [8]. The poor tolerability often results in self discontinuation of therapy.
The second category of adverse events can be termed NSAID-related gastroduodenal injury of unclear clinical significance. Patients may be asymptomatic but have erosion or ulceration on EGD and somewhere between 15-30% of patients have endoscopically confirmed GI ulcers [9]. Lastly, patients may develop symptomatic ulcers, bleeding ulcers, obstruction or gastrointestinal bleeding. Complications occur at approximately 1-2% during the first year, increasing to 4-5% of patients with symptomatic ulcers [10]. Although data is scarce, one study in Spain estimated the mortality rate to be 15.3 deaths/100,000 NSAID/aspirin users [11]. In 2006 in the US, this rate was greater than the rate of death from a car accident or firearm injury, which are approximately 15 and 10 per 100,000 people respectively [12]. 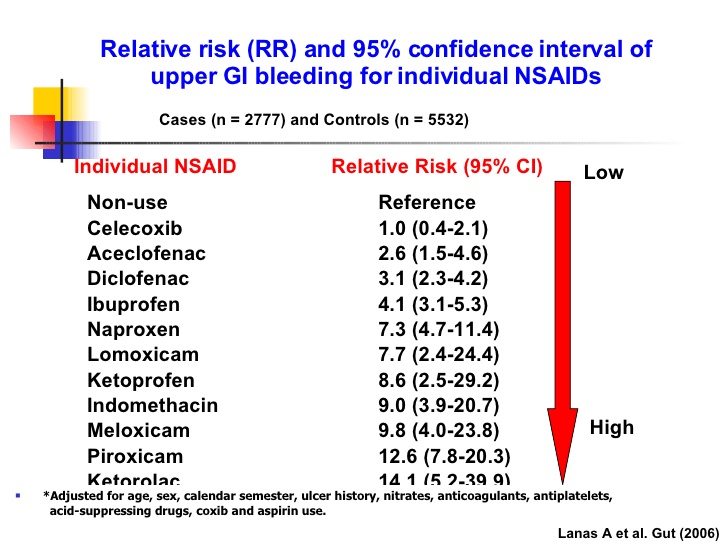 Clinicians should be familiar with which NSAIDs have the lowest risk of gastrointestinal toxicity. In one systematic review from 2012, the risk ratio of upper GI complications, which varied between studies but included upper GI bleeding, bleeding and/or perforation, and uncomplicated peptic ulcer disease,  ranged from 1.43 to 18.45 [13]. Stratified by specific drug, the follow risk ratios were found:
In general, selective COX-2 inhibitors have been found to have fewer gastrointestinal symptoms and a lower risk of gastrointestinal complications than non-selective NSAIDS [14]. Diclofenac, nimesulide and sulindac have also been shown to be hepatotoxic [15].

Image 2. Algorithm for long-term NSAID therapy according to a patient’s GI and CV risk factors (courtesy of sciencedirect.com)

Attempts have been made made to mitigate the gastrointestinal risk by altering the preparation of the NSAID with an enteric coating or adding a second medication, namely a proton pump inhibitor, H2 blocker or misoprostol. Enteric coating of aspirin does not appear to reduce the gastrointestinal risk [16]. In patients with a history of bleeding ulcer, comparing the use of celecoxib to diclofenac plus omeprazole did not result in a significant difference in the recurrence of bleeding [17]. In a subsequent study, combining celecoxib with esomeprazole also significantly reduced the incidence of recurrent bleeding [18]. The addition of misoprostol reduced gastrointestinal complications by 40% [19]. PPIs appear to be superior to H2 blockers  but clinically equivalent to misoprostol in the treatment and prevention of peptic ulcers [20, 21]. The use of either NSAIDs plus PPI co-therapy or COX-2-selective agents compared with NSAIDs alone reduced hospitalizations by 54% [22].

In summary, there are no clear guidelines about the use of NSAIDS and screening for gastrointestinal complications. It is recommended that patients at risk of GI complications either receive a non-selective NSAID with a gastroprotective agent or a selective cox-2 inhibitor.  Clinicians should use the “safest” NSAIDS, at the lowest dose, for the shortest period of time. They should avoid NSAIDS with higher gastrointestinal risk. Patients on anticoagulation, oral corticosteroids, low dose ASA or antiplatelet medications should not take NSAIDS. Note that when combined with low-dose aspirin, the benefit of the low risk NSAIDS and coxibs tend to disappear [23].