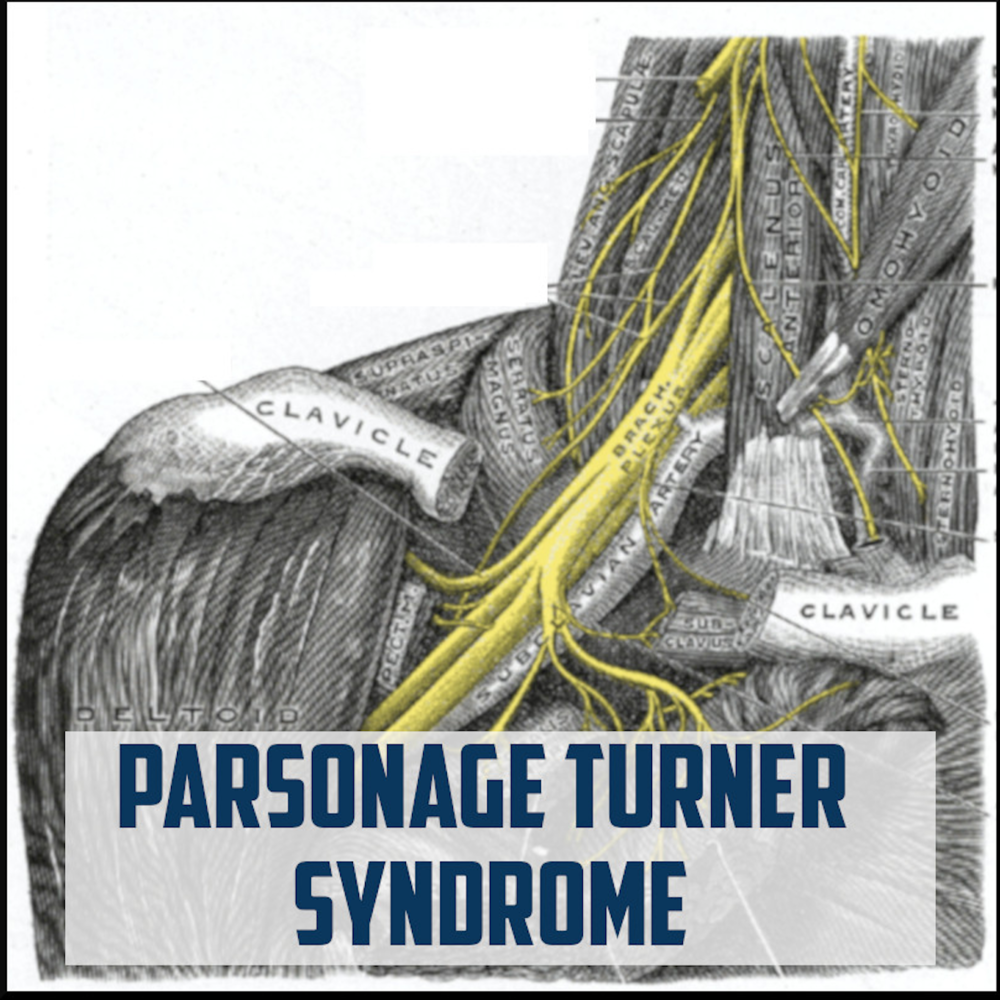 Shoulder pain is a common complaint in both the primary and sports medicine setting. There are occasions that odd presentations walk into the clinic that make providers expand their differential diagnosis and think outside the box. Parsonage-Turner syndrome (PTS) tends to be one of these diagnoses and can present in a multitude of ways. There are case reports with possible antecedent events such as medication reaction, parasite infection, dysphonia, burns, calcific tendonitis, hepatitis, infection, among others. The incidence was found to be 1.64 per 100,000 in a Minnesota population and predominated between the third and seventh decades of life, with men being more commonly affected [12].
The incidence was found to be 1.64 cases per 100,000 inhabitants, in the population of Minnesota, United States, with occurrences predominantly between the third and seventh decades of life.17,18 Men are more affected than women, with a ratio of between 2:1 and 11.5:1.11 The prognosis is good in most cases, given that PTS is self-limiting and has a low recurrence rate.11 The treatment is generally successful, with use of analgesics and physiotherapy in order to maintain the range of motion and strengthen muscles

Parsonage-Turner syndrome is also known as neuralgic amyotrophy, paralytic brachial neuritis, idiopathic brachial plexopathy or acute brachial radiculitis [1]. It is described in both children and adults and consists of a sudden, rather abrupt, unilateral shoulder or upper extremity pain that may begin rather insidiously but quickly amplifies in severity and intensity. It was first reported in 1948 by the Parsonage and Turner, but similar clinical presentations were described as far back as 1897. 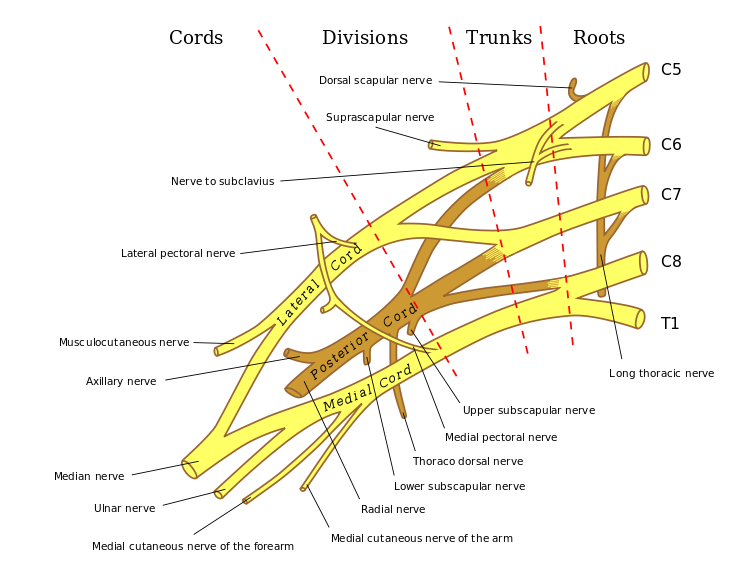 It is considered to be an inflammatory condition of the brachial plexus, but the pathophysiology is somewhat unknown. Electrophysiologic studies suggest it is a multifocal process rather than a global process and involves motor serves more frequently when compared to sensory nerves. The exact pathophysiology is complex and incompletely understood. Mechanical processes such as positions related to surgical procedures, autoimmune, genetic and infectious processes have been proposed. An antecedent event has been identified in around 50 percent of cases and immune mediated response has been shown in 20-40 percent of cases [3,4]. It has also been associated with coronary artery bypass, oral surgery, hysterectomy and a variety of orthopedic procedures [1,5]. Van Alfen suggests that the pathophysiology of the condition involves an interaction between a genetic predisposition, mechanical vulnerability, and an autoimmune trigger [4].

The presentation is also variable but does follow a particular pattern in many cases. This pattern begins with acute onset of severe pain that last for several days or weeks, followed by weakness and muscle atrophy. The presentation is highly variable with different pain and paresthesias that are usually worse at night. It is typically located in or around the shoulder and radiates down the arm or proximally. Motion and Valsalva maneuvers tend to make the pain worse and is usually unilateral. The duration of pain is variable, but mostly lasts 1 to 2 weeks. After the acute pain period, lingering neuropathic pain occurs [1,5]. Weakness and atrophy may develop and can worsen as the pain subsides. Muscles most commonly involved are the deltoid, rotator cuff, serratus anterior, biceps and triceps [6]. The lateral antebrachial cutaneous (LAC) sensory nerve is affected in 32% of cases [7]. There are typically no constitutional symptoms. 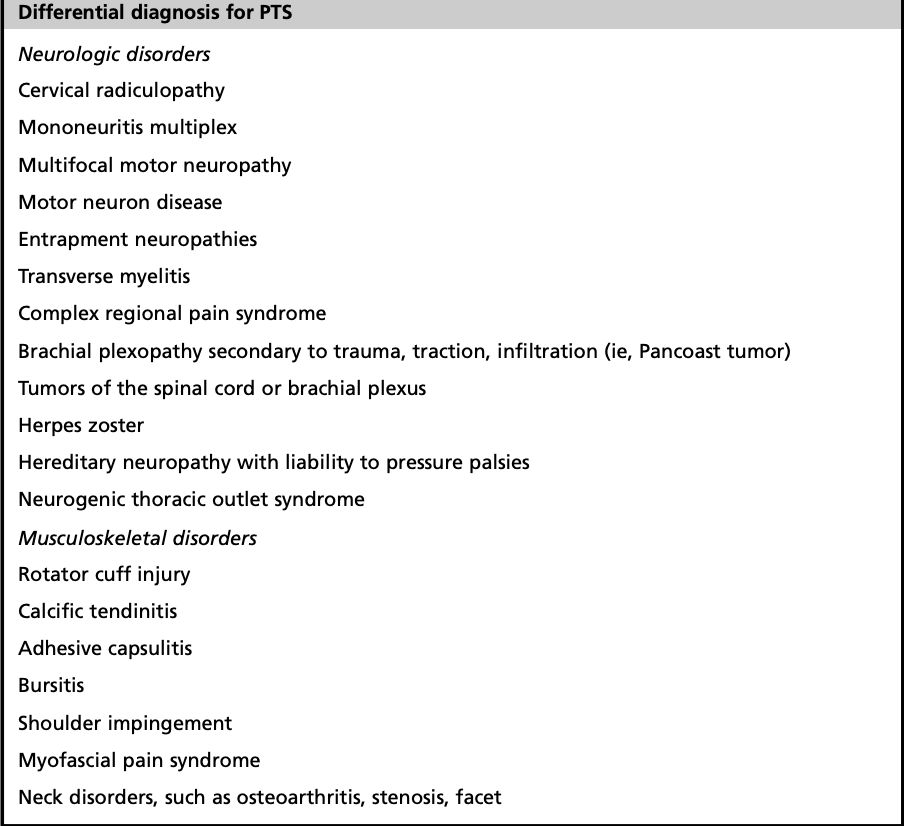 Evaluation for PTS can also be challenging due to its variable nature. It is mainly a clinical diagnosis but examination can aid in the diagnosis. A thorough cervical examination can show weakness in musculature, especially once the acute phase of pain has subsided. Atrophy can occur in a multitude of muscles, but the shoulder musculature should be evaluated closely for atrophy. Observing for scapular winging and wall push ups should be performed due to the possibility of long thoracic nerve involvement. Electromyography is typically a very important diagnostic modality. 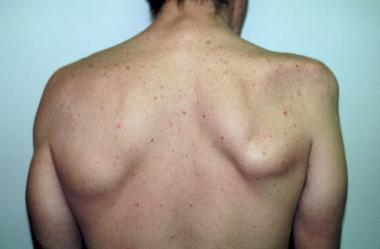 Electromyography is typically a very important diagnostic modality. Electromyographers need to be extremely detail-oriented in the systemic approach to testing muscles of the upper limb [1]. EMG studies should typically be performed after 3-4 weeks of symptom onset and are normal many times if tested before 3 weeks. Since PTS is an axonal disorder commonly affecting proximal muscles of the upper limb, the motor and sensory nerve conduction velocities and distal latencies routinely tested on the distal upper limb are usually normal. Because of the involvement of the lateral antebrachial cutaneous nerve in many cases, some providers order a comparison of the unaffected limb. EMG studies 4 to 12 months after the onset of symptoms may show old denervation and reinnervation with polyphasic motor unit potentials [1].

Other imaging studies are typically done to exclude other disorders or pathology. A chest radiograph may be done to rule out a Pancoast tumor. MRI of the cervical spine can help to rule out any cervical disc disease or nerve root compression. Magnetic resonance imaging of the shoulder can rule out rotator cuff pathology, labral tears, nerve entrapment or mass lesions. MRI findings most characteristic of PTS include diffuse high signal intensity on T2-weighted images, involving one or more muscles innervated by the brachial plexus [9]. Like the EMGs, these findings may not appear for the first few weeks. More recent reports show a potential hourglass constriction in peripheral nerves in five patients and another showing a similar pattern in 27 patients that correlated with EMG findings [16,17].

Due to the nature of the diagnosis, it may go unrecognized and treatment may be difficult. Treatment options are dependent upon the stage of PTS, although there is no preferred or best treatment option. Options for nonpharmacologic treatment are based on small studies and anecdotal evidence. Current treatments involve physical thearpy, osteopathic manipulation, therapeutic modalities and acupuncture. Physical therapy can be challenging and the goal should be to maintain range of motion and prevent loss of function. The timing depends on pain, weakness and degree of intervention. An overly aggressive approach can overload muscles that are weak and athletes should not lift outside of physical therapy [1,10]. The mainstays of therapy include stretching, range-of-motion, and therapeutic exercise. Nerve stimulation and acupuncture may play a role in pain relief, though only small case studies exist [1].

Pharmacologic options also exist for symptom management. Severe pain in the acute stages are often treats with nonsteroidal anti-inflammatory medications (NSAIDs) and opioids. Anti-epileptic medications such as gabapentin or tricyclic antidepressants like amytriptyine are used to treat neuropathic pain that lingers after the acute stages. Patients with a history of viral infection are sometimes treated with antivirals. Cervical epidural injections are sometimes doen for diagnostic and therapeutic reasons. The evidence supporting these therapies is limited, however. One study suggests early treatment with oral prednislolone at 1 mg/kg for the first week and tapering during the second week [4]. Another treated several patients with a two week course of 60 mg prednisolone in the first week and taped the second week at 10 mg per day and a faster recovery was noted [11]. One case study showed improvement in symptoms following immunotherapy after developing peripheral neuropathies [13]. More randomized controlled trials are needed to determine best management for PTS.
Despite challenges with diagnosis and pain, prognosis is good for most cases [2]. The best possible outcome involves around one month of symptoms that responds with conservative management. One large study reported 89% of patients had a full functional recovery at 3 years based on functional strength, with only 36 percent showing “excellent” recovery after one year [14]. No long term studies that document full EMG recovery exist and most estimates for reinnervation are between 6 and 12 months. Another study with 246 patients reported around one-third of patients continue to experience chronic pain of persistent functional deficits after 6 years [11]. Prolonged pain and weakness are associated with poor prognosis and patients may also have subsequent attacks.

Parsonage Turner Syndrome is a rare and underrecognized condition with limited high-quality evidence in regards to treatment. Diagnosis should be considered in patients with abrupt onset of upper extremity pain that is non-traumatic in most cases. Muscle weakness and atrophy may follow an acute painful phase. An antecedent event occurs in around half the cases. Although many theories exist in regards to pathophysiology, a common unifying cause has not been established. EMG studies after three weeks can show specific abnormalities that can aid with diagnosis. No specific treatments have been proven to reduce neurologic impairment and most modalities are to control symptoms or maintain functionality. Most patients are treated with a multidisciplinary approach including physical therapy and pharmacologic treatments.