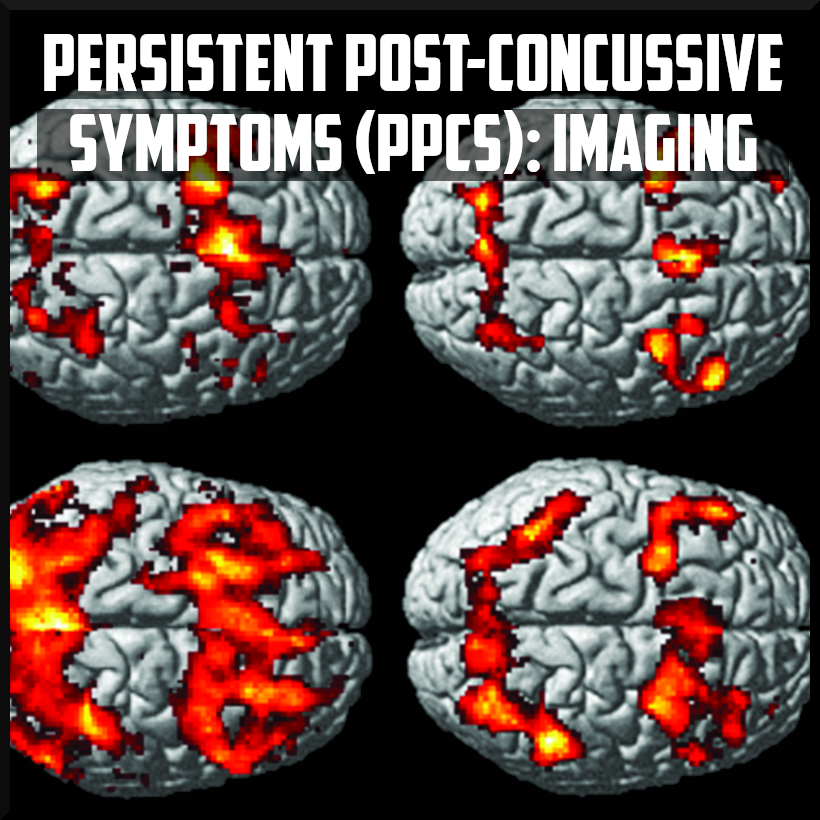 After covering introduction and diagnosis of persistent post-concussive symptoms (PPCS), also known as post-concussion syndrome, we move forward to examine the evidence behind imaging modalities used in the evaluation of this disease.  The recommendations behind imaging acute concussions or acute neurologic symptoms related to concussions will not be discussed in this article and will be discussed in the future.
Introduction. The outpatient management for individuals with persistent post-concussive symptoms is variable and can be frustrating for both patients, parents and providers. Affected patients or parents of affected children will sometimes request CT scans or MRI scans. For many clinicians, advanced imaging is typically used for prolonged symptoms to rule out any structural abnormalities such as Arnold-Chiari malformations, tumors or hemorrhage. CT scans historically have been utilized to identify fracture, intracranial hemorrhage, contusion, mass effect and herniation related to head trauma (1). Conventional MRI scans offer superior visualization of soft tissue brain structures and can detect post traumatic encephalomalacia, reactive gliosis, hemosiderin deposits and microbleeds, although these are only typically seen in more severe forms of TBI, or traumatic brain injury (2). Some studies have suggested MRI is superior in detecting lesions associated with closed head trauma or TBI (3-4).
There is paucity in data regarding conventional imaging in patient with PPCS. A 2009 study by Schrader et al. compared MRI imaging in twenty young adults that sustained a concussion with brief (< 5 min) loss of consciousness to young adults with minor orthopedic injuries and showed no difference in MRI findings at 24 hours and 3 months (8). A 2011 critical review by Pulsipher et al. concluded that CT and MRI scans are classically low yield when examining concussions related to sport (1). Three studies were mentioned in this review, including two in boxing athletes and one in soccer athletes (5-7). A 2015 study examined whether or not imaging was cost effective for post-concussion symptoms (symptoms >2 weeks used as criteria in this study) and found two total relevant abnormal findings in 32 studies in 23 patients that included MRIs, CT scans and x-rays (9). There were five incidental findings reported, which included 3 with arachnoid cysts. The two relevant findings were a nondisplaced parietal skull fracture on a CT scan and multiple focal punctate foci in bilateral frontal, temporal, and parietal regions on an MRI scan. This study was done in a university setting and cost a total of more than $129,000 for these two findings (9).
Conventional studies of x-rays, CTs and MRIs are not sensitive in detecting diffuse axonal injury, which has been shown to be commonly associated with mild TBIs (10). Additionally, CTs and MRIs have been not been shown to correlate with clinical symptoms (10-11). Due to this, there has been a shift over the past decade investigating advanced imaging such as diffusion tensor imaging, MR-SPECT and functional MRI (fMRI). 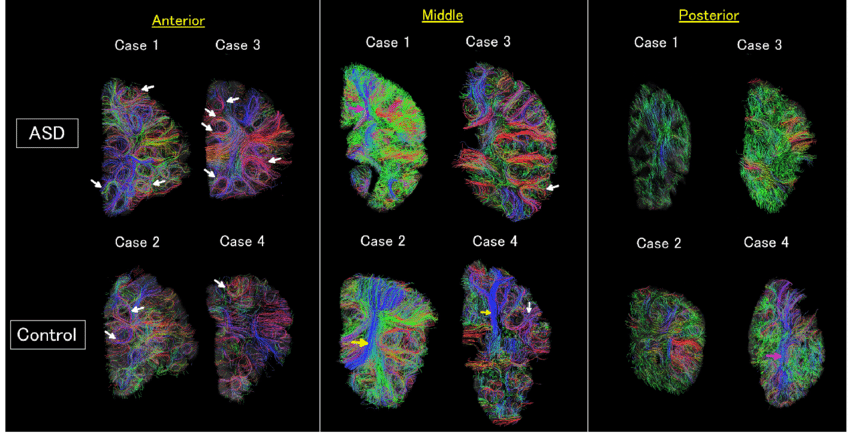 Image 1. Diffusion tensor imaging of the brain (courtesy of researchgate.net)

Diffuse tensor imaging (DTI) is an MRI-based imaging technique that can generate images of brain white matter tracts by measuring the the water molecule diffusion within white matter (12). DTI can also provide information regarding grey matter integrity for indicators of concussion, such as gliosis and necrosis (13). Fractional anisotropy, or FA, measures the relative directionality of water diffusion in axons and is used as a marker of white matter integrity. It has been demonstrated to be sensitive to white matter abnormalities following mild TBIs (14-15).
A 2012 meta-analysis of 13 studies by Aoki et al. concluded that patients with mild TBI demonstrated a significant FA reduction in the corpus callosum without bias and provided strong evidence that DTI can detect microstructural damage in the white matter for mTBI patients. A 2013 study with 30 military veterans with chronic mild TBI showed significant loss of white matter integrity in primary fibers in a widely distributed pattern in major and smaller peripheral tracts when compared to non-TBI participants (16). This widespread pattern was typically associated with moderate and severe TBIs. Changes were also not evident on standard T1 weighted MRI images and there was more significant white loss matter correlated with feeling “dazed and confused,” but not with co-morbid conditions such as depression and PTSD (16). However, there has been some conflicting results in which areas of the brain are most affected and to what extent, but most studies do show white matter changes and decreased FA in areas of the corpus callosum (17). Another recent study has linked decreased FA in areas of the brain in individuals with mild TBI on days 11-16 to unfavorable outcomes at 3 and 6 months (18).
In summary, diffusion tensor imaging, or DTI, has shown the ability to detect diffuse axonal images and white matter changes in the brain associated with chronic mild TBIs. The protocols and areas most affected have shown some variability, but FA, or fractional anisotropy, has been the most consistent measurement affected. Current studies are aiming to uncover more about acute and chronic mild TBIs and to correlate these changes with clinical outcomes.

Image 2. Functional MRI of the brain (courtesy of NYU.edu)

Functional MRI (fMRI) is a noninvasive technique without radiation exposure that captures neuronal activation by measurement of changes in BOLD, or blood oxygen dependent, signal alterations. These changes result from increased metabolic demand that diverts arterial oxygenated blood to their immediate surroundings and the conversion of oxyhemoglobin to deoxyhemoglobin results in decreased T2 signal. It has shown promise in the ability to detect subtle and chronic alterations in BOLD signal, differentiate neurodegenerative diseases such as Lewy body dementia and Alzheimer disease and has also shown alterations in functional connectivity in mild TBI (19).
Most initial studies worked with working memory and Zhang and colleagues reported an abnormal disperse BOLD signal and increased activity in the dorsal prefrontal cortex (DLPFC) during a spatial memory task in concussed athletes (20). Talavage and colleagues showed significant changes on fMRI in eleven high school football players when comparing pre and postseason scans. Altered activation in the DLPFC and other fMRI changes were shown in both concussed and non-concussed players, suggesting that subconcussive blows or trauma may affect the brain with no observable symptoms and these players will continue to play (21). Three recent studies have also shown an decreased functional connectivity default mode network or resting state in patients suffering from persistent post-concussive symptoms (19, 22-23). Sours et al. also showed progressive DMN changes during the first 6 months following injury, which is suggestive of compensatory reorganization or disrupted network communication due to structural damage (23).
In summary, functional MRI and detection of aberrant BOLD signal shows promise as an indirect marker for altered neuronal activity in patient with mild TBI and persistent post concussive symptoms. Altered activity in the prefrontal cortex after both subconcussive trauma without symptoms and concussed athletes has been reported. The functional connectivity and default mode network seem to be affected in patients suffering from PPCS and may be used as an indicator or tool for concussion recovery. 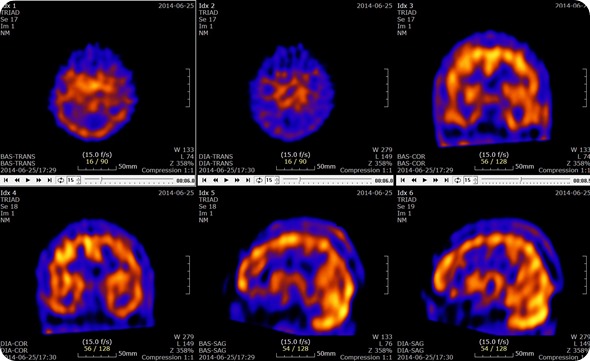 SPECT, or single-photon emission computed tomography, is a functional technique used to measure cerebral blood flow based on the distribution of a radiopharmaceutical that is injected intravenously (24). Tomographic images/3D images are constructed that represent cerebral activity (typically at rest) and is a sensitive tool for detecting regional abnormalities in brain function and relative cerebral blood blow. The cerebral blood flow (CBF) is an indirect measurement of brain metabolism and depends on comparison to normal tissue, which may be difficult in the setting of a concussion. SPECT has been shown to be more sensitive in detecting abnormalities with mild TBIs when compared to conventional MRI (25).

For individuals with mild TBI, abnormal SPECT scans were shown to be predictive of poor clinical outcomes at 3 months and 12 months and normal SPECT scans had favorable clinical outcomes in the same timeframe (26). The American Academy of Neurology did issue caution with this study, however, due to lack of consensus or definition of an “abnormal” exam (27). A 2011 study showed significant decreases in regional CBF across the whole brain on SPECT in former NFL players when compared to age-matched controls. The areas most affected were the prefrontal poles, temporal poles, occipital lobes, anterior cingulate gyrus and cerebellum (28). Another 2015 study with 15 patients with chronic mild TBI showed larger areas of regional CBF during neuropsychiatric testing in the dorsolateral prefrontal cortex and areas of suppression in the occipital and parietal lobes when compared to asymptomatic subjects. It was also shown that patients with TBI showed correlations in the inferior frontal and superior temporal cortices during testing, whereas healthy controls had more activation in the cerebellar cortex. This was thought to suggest a compensatory mechanism and provide an explanation of cognitive fatigue and impairment in patients with chronic mild TBI (29). Other studies have focused on symptomatic subjects with chronic mild TBI and have shown hypoperfusion on SPECT imaging involving the frontal and temporal lobes, but these findings have not been consistently correlated with symptoms, clinical picture or performance on neuropsychiatric testing (30-34).
In summary, SPECT is a functional technique used to measure cerebral blood flow that produces tomographic or 3D images and has been shown to be more sensitive than conventional MRI or CT in detecting abnormalities with TBIs. A few studies have shown abnormal cerebral blood flow, most notably dorsolateral prefrontal cortex and temporal lobes, in multiple studies. However, more long term data regarding abnormal SPECT scans and their relevance in regards to clinical symptoms and outcome is needed.
Another modality called arterial spin labeling (ASL) uses electromagnetically labeled water molecules contained within the arterial blood in the neck and relies on radiofrequencies and is an attractive alternative for perfusion studies regarding TBIs. There is one 2009 study with ASL that showed a decrease in bilateral thalamic cerebral blood flow that was significantly correlated with neurological testing results (35). Another study in 2010 showed global CBF reductions, but worst particularly in the posterior cingulate cortices, the thalami and frontal cortices, in 27 patients with chronic TBI at resting state (36).
Summary. Outpatient management of patients with persistent post-concussive symptoms can be very difficult for providers and patients. Macrostructural neuroimaging modalities for PPCS such as CT or MRI are historically low yield, can be very expensive and are not recommended unless intracranial injury is strongly suspected. Each case needs to be made by the clinical provider or team caring for the patient on a case by case basis. There are studies that advanced imaging such as DTI, fMRI and MRS have greater sensitivity detecting abnormalities in chronic TBI. Additionally, consensus agreement of an advanced neuroimaging protocol in PPCS or mTBI is yet to be established. These machines are generally not available to most physicians and patients. More studies are needed to correlate the abnormalities on these imaging modalities with clinical symptoms and recovery.