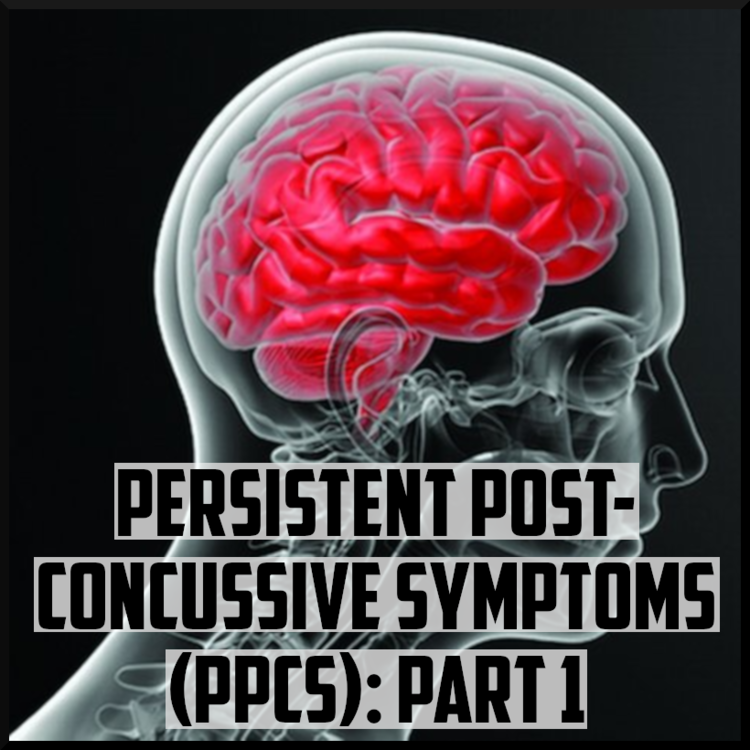 Concussions, which are generally categorized as a form of mild traumatic brain injury (mTBI), are a very hot topic in sports medicine. They are defined in the 2019 AMSSM position statement as “a traumatically induced transient disturbance of brain function and involves a complex pathophysiological process” (Harmon, 2019). Clinical recovery is defined as a return to normal activities, including school, work and sport, after the injury. The majority of adult patients, ranging from 85 to 90 percent, will recover in 7-10 days (Leddy, 2012). More recent evidence has caused an increase in expected recovery time for children between 10 days and 4 weeks, with the understanding that a sizeable minority of youth, high-school and collegiate athletes take much longer than 10 days to clinically recover (Harmon, 2013; King, 1997; McCrea, 2003). This is due to many reasons including increasing recognition of concussions, elimination of same day return to play, increased time with return to play guidelines and medical management of concussion.

The definition of post-concussion syndrome (PCS) is somewhat controversial and there is disagreement among sports medicine physicians regarding the diagnosis. Many think of post-concussion syndrome as symptoms of concussion that occur after the average recovery period. It is difficult to define when post-concussion syndrome begins but many providers are comfortable with the diagnosis if symptoms have not subsided in 4 weeks according to a survey among 600 ACSM (American College of Sports Medicine) members (Rose, 2015). A broader definition is represented by clinical criteria of the World Health Organization’s International Classification of Diseases. The criteria include history of head trauma, no objective memory loss and 3 or more of the following symptoms four weeks following a concussion: headache, dizziness, fatigue, irritability, insomnia, concentration difficulty or memory difficulty (Leddy, 2012; Willer, 2006). Due to controversy regarding the term syndrome, postconcussional disorder in the DSM-5 was replaced by “neurocognitive symptoms associated with traumatic brain injury” (DSM5, 2013). The 2013 AMSSM position statement refers to post-concussion syndrome as symptoms and signs of a concussion that lasts “weeks to months” (Harmon, 2013). The most recent concussion consensus statement in Berlin tried to establish a time frame of greater than 14 days in adults and greater than 4 weeks in children, did not use the term “post-concussion syndrome,” but used the terminology “persistent post-concussive symptoms” (McCory, 2016). Due to lack of consensus, definitions are inconsistent in the literature and incidence ranges widely from 1.4% to 29.3% (Rose, 2015). A preference for one set of diagnostic criteria has not been established in research or in clinical practice (Willer, 2006; Boake, 2005).

The recently published AMSSM position statement has aligned with the Berlin consensus statement and tried to define “persistent post-concussive symptoms,” or PPCS, with a time frame of >14 days in adults and >4 weeks in children (Harmon, 2019; Kamins, 2017). The statement has also made clear that persistent symptoms do not necessarily indicate there is ongoing injury to the brain and states it is critical to consider comorbidities and how they may affect recovery (Harmon, 2019).

There are two main theories when describing the pathophysiology behind persistent post-concussive symptoms. One theory has been studied in animals and extrapolated to humans. This involves the force delivered to the brain that causing stretching of neuronal cell membranes in a complex cascade of ionic, metabolic and pathophysiologic events. There are changes in cerebral glucose metabolism, blood flow and alterations in mitochondrial respiration. An initial phase of hyperglycolysis followed by a prolonged phase of metabolic depression was shown to last 7-10 days in adult rats (Hovda, 1991). Inflammatory cell activation along with alteration of the blood brain barrier, axonal degeneration and altered neuroplasticity may occur more often in the chronic stages of concussion (Kumar, 2012). Magnetic resonance spectroscopy in humans with athletes sustaining a concussion showed a similar basic pathologic response. However, athletes that reported being symptom free (3-15 days) did not demonstrate complete recovery on scans until a mean on 30 days post-injury in athletes presenting with their first concussion and around 45 days in athletes with a second concussion (Vagozzi, 2010).

The other leading theory deals more with physiologic changes that occur. Concussed patients have been shown to have higher resting heart rates at rest and after both cognitive and physiologic stress (King, 1997; Gall, 2004). Athletes with concussion have been associated with greater sympathetic nervous system activity and lower parasympathetic nervous activity when compared to controls and may be related to autonomic dysregulation (Goldstein, 1998). Maintenance of cerebral blood flow or autoregulation is also affected by concussion and thought to be one of the reasons symptoms can fluctuate with exertional activity (Strebel, 1997). It has been proposed that a head injury can affect the autonomic nervous system at the brainstem, which in turn affects cardiorespiratory control of ventilation and causes these physiologic changes.

Symptoms of a postconcussion syndrome can be subjective or objective and are often vague and non-specific. It is common to cluster or organize complaints into the categories of sleep-related (insomnia), cognitive (memory loss, poor concentration and problem solving), emotional (depressed mood, irritability, anxiety) and physical (headache, dizziness, exercise intolerance, fatigue, noise and light sensitivity) (Harmon, 2013). A detailed multimodal clinical assessment is required to identify primary and secondary pathologies that may be contributing to persistent symptoms. A comprehensive physical exam can uncover risk factors for prolonged recovery, such as a history of migraines, ADHD and a history of prior concussions. A focused physical examination can point towards cervical pathology or neurologic symptoms, among other things. It is not uncommon to have a full neuropsychiatric evaluation in patients with persistent symptoms and some institutions and practices have neuropsychologists and physical therapists involved in care in the first week of symptoms. A vestibular and visual exam should be done and documented to ensure these systems have recovered and may guide further therapy and treatment. Extraocular movements should be examined and it has been shown that patients with PCS can have persistent abnormalities in smooth pursuit and saccadic eye movements (Heitger, 2009).

Clinicians must also be aware of the current known risk factors for prolonged concussion symptoms and how they may affect recovery. Most questionnaires now aid in documenting risk factors that have been linked to prolonged recovery including history of migraine headaches, depression, anxiety, history of multiple concussions, attention-deficit/hyperactivity disorder, or learning disability (Guskiewicz, 2003; Kutcher, 2010). Athletes with learning disability or ADHD has come into question recently with a study in high school athletes (Harmon, 2019). The most recent AMSSM position paper stated it was not a risk factor for prolonged recovery. A pre-injury diagnosis of depression or anxiety along with post-traumatic stress around 5 days after the injury were found to be risk factors for concussion symptoms lasting more than 3 months (Meares, 2011). Other risk factors known as early as the 1980s are gender (female), previous head injury and substance misuse (Binder, 1986; Edna, 1986; Merrett, 1979). Depression is an important consideration in the differential diagnoses for PCS, in part because of overlapping symptoms. A study of physician-diagnosed depressive disorder found that 9 out of 10 patients met liberal criteria for PCS, whereas 5 out of 10 met more conservative criteria (Iverson, 2006).

Conclusion. In summary, there has been a shift over the past two years to change the terminology regarding prolonged symptoms following a concussion. Both the Berlin consensus statement and most recent AMSSM position paper encourage using “persistent post-concussive symptoms (PPCS).” The time frame has been historically variable in definition but using a time frame of greater than 14 days for adults and greater than 4 weeks for children is being encouraged. There are two main theories involving the pathophysiology of persistent post-concussion symptoms, but neither has been definitively shown or pinpointed in human subjects. Clinicians must be aware of the multitude of symptoms and risk factors associated with prolonged concussion symptoms to be effective in coming up with an appropriate diagnosis. We will move into imaging and treatment strategies regarding persistent post-concussive symptoms in future posts.