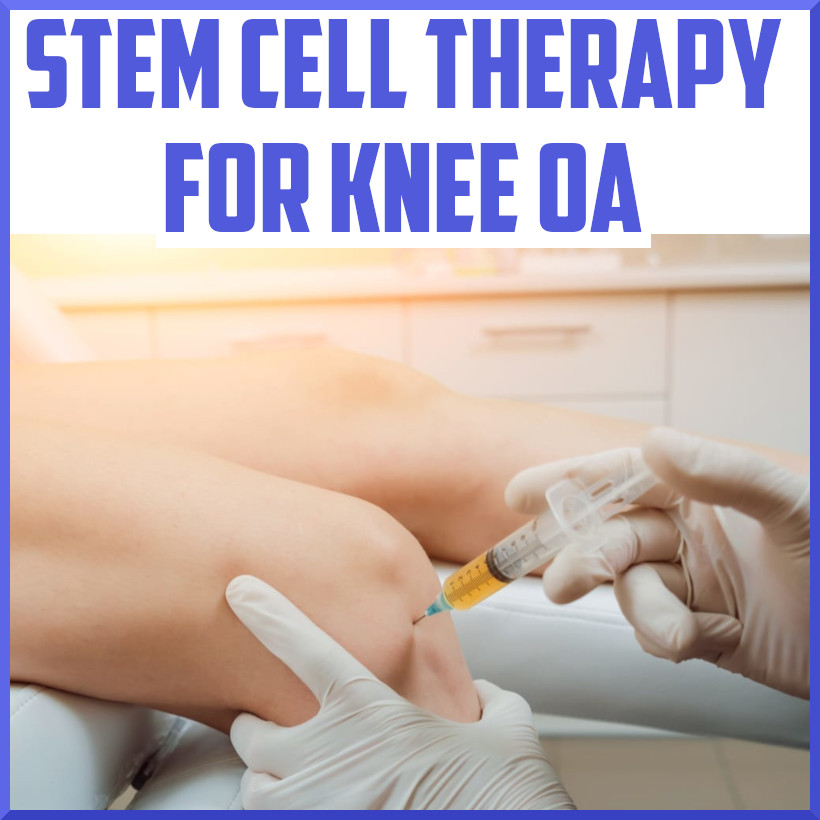 Osteoarthritis of the knee carries a lifetime risk of roughly 45 percent and increases to 60 percent amongst obese individuals.  Degradative enzymes are overexpressed in the knee and prevalence increases with each decade of life.  Progression according to imaging can be graded as localized (focal) or diffuse, meaning it affects more than 75 percent of the region.  It can also be graded as normal, doubtful, mild, moderate or severe (grade 0–4 on the Kellegren Lawrence scale) [1].

While in your clinic, you are seeing a 56 year old football coach with knee pain. He states he knows he has arthritis in his knee, but would like to know how severe this is. He has definitive osteophytes and possibly some mild joint space narrowing. This description correlates best with which grade of the Kellgren and Lawrence System?

Many patients will likely present to a sports medicine practice and ask if there are any ways to reverse or prevent further damage when diagnosed with knee osteoarthritis.  No conventional or pharmacological therapies have demonstrated unequivocal efficacy in halting disease progression and injections of molecular compounds to assist healing, such as corticosteroids, may only have pain reducing effects.  Regenerative therapies have gained traction over the past ten to fifteen years, as osteoarthritis is a degenerative process.  This is especially the case in the challenging subset of younger OA patients, who have high functional demands yet limited indications for invasive surgical treatments.  Other interested patients may be middle-aged and expect to maintain a high activity level or want to postpone surgical intervention.

It is proposed that endogenous mesenchymal stem cell (MSCs) are depleted in the disease process of osteoarthritis and stem cell therapies may have potential for repair or regeneration of cartilage.  Mesenchymal cells are able to differentiate into several cell types such as osteoblasts, chondrocytes, or adipocytes and have high plasticity, limited self-renewal capabilities, and immune-suppressive and anti-inflammatory actions [2]. Growth factors, cytokines, bioactive lipids, and microvesicles that are released from stem cells may also exert beneficial effects including angiopoietic and antiapoptotic actions. Studies have also highlighted the presence of MSCs in numerous adult tissues including adipose and muscle tissues, the dermis, periosteum, synovial membrane, synovial fluid, and articular cartilage [3]. 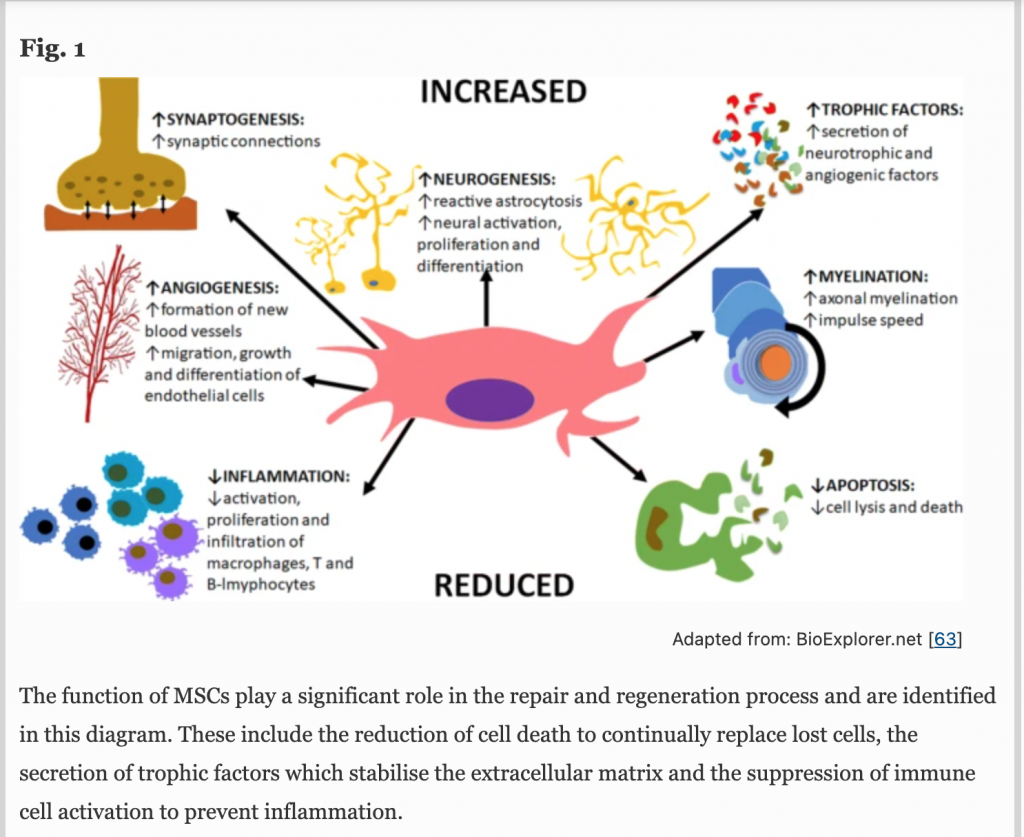 Two of the challenging aspects of stem cell therapies is choosing the approach and the other is the regulation of stem cells.  Two sources have the most available sources, which include adipose-derived stem cells (ASCs) and bone marrow mesenchymal stem cells (BMSCs).  The main treatment modality for ASCs is adipose-derived stromal vascular fraction (SVF).  The collection of adipose-derived SVF involves multiple steps: first, a liposuction is performed to obtain adipose tissue.  In order to isolate the ASCs from the extracellular matrix, collagenase is added to the lipoaspirate [4]. Subsequently, the collagenase in the mixture is removed via a dilution method, which involves washing the lipid-enzyme mixture with normal saline solution, followed (in some cases) by sterile centrifugation. This results in the final SVF product, ready to be administered to the patient.  BMAC is obtained via bone marrow needle aspiration (which can be performed on various sites but most commonly on the iliac crest) and subsequent concentration via dedicated centrifuges which can be transported and used directly within the OR [2].

More challenges and barriers also exist when reviewing the trials involving knee osteoarthritis and stem cell therapies.  Many trials combine therapies including platelet rich plasma, hyaluronic acid and others.  Other trials are done with stem cells injected or placed intra-operatively or post-operatively.  In addition, some trials do not use validated questionnaires such as the WOMAC, IKDC, KOOS, Lysholm score, or Tegner activity scale.

When reviewing SVF, minimal adverse side effects have been reported and it has been shown to be safe.  In regard to donor site morbidity, liposuction is typically very well tolerated by patients mainly due to the limited amount of tissue harvested.  SVF administration has generally shown positive clinical outcomes.  A significant improvement in terms of range of movement, pain, and articular function during daily activities (measured via varied and commonly used validated questionnaires such as WOMAC, IKDC, KOOS, Lysholm score, Tegner activity scale, and VAS pain scale) was reported in fourteen separate studies [6-19].  Five of these studies showed improvement [8,9,11,16,18] on MRI with partial regeneration of articular cartilage and two of the studies did not show improvement [7,15,19].  Reviewing these studies, the number of knees ranged from 10-54 with the majority of them being prospective or retrospective studies.

Image 2. Illustration of the stages of knee osteoarthritis (courtesy of theconversation.com)

The majority of studies prior to 2018 (around 70 percent) occur with bone marrow aspirate concentrate (BMAC).  The studies available are similar with the majority being retrospective with only a couple of randomized controlled trials [20-29].  The number of knees ranged from 15-373.  Overall, a significant improvement in pain and function has been reported in most studies.  However, no superiority has been demonstrated over viscosupplementation or corticosteroids.  Shapiro et al. found no statistically significant differences between BMAC and saline injections and is one of the only placebo controlled randomized controlled trials [23,31].  There are conflicting results and limited studies in regards to MRI cartilage changes and improvements [23,28].  One trial suggested multiple injections could be more effective than a single one [21] and a higher concentration of BMAC was associated with a significantly better outcome [25].

A more recent meta-analysis including fifteen randomized controlled trials with nine of them being from adipose showed that MSCs therapy was safe, effective and can significantly reduce postoperative pain [30].  This does show a shift in more recent trials with more adipose-based stem cell therapies.  Most of these were recent studies in 2018-2020 and had a small treatment group between nine and twenty patients.  One of the studies showed a slight improvement with two injections of adipose stem cells with slightly decreased progression of disease [32].

In summary, BMAC and SVF have emerged as the easiest way to employ MSCs in clinical practice, since these products can be rapidly harvested directly within the OR and be immediately administered to patients in disparate ways, such as simple intra-articular injections.   More randomized controlled trials have emerged over the past 3-5 years with a slight increase in trials with SVF.  Many of the current studies lack power and have a high risk of bias.  The concurrent use of other biological agents or biomaterials or the administration of these cellular products following “conventional” surgical procedures introduces additional confounding elements, thus preventing a fair comparison of the studies performed so far.  Basic questions such as the number of cells administered, the optimal number of injections to achieve the best therapeutic effect, and the superiority of one preparation method over another still remain unanswered. Despite the attempts presently published, the literature is still lacking well-designed trials to address these issues.  Nevertheless, focusing on clinical results, BMAC and SVF have been shown to be safe and to have some short-term beneficial effect on the treatment of knee cartilage degeneration [19].