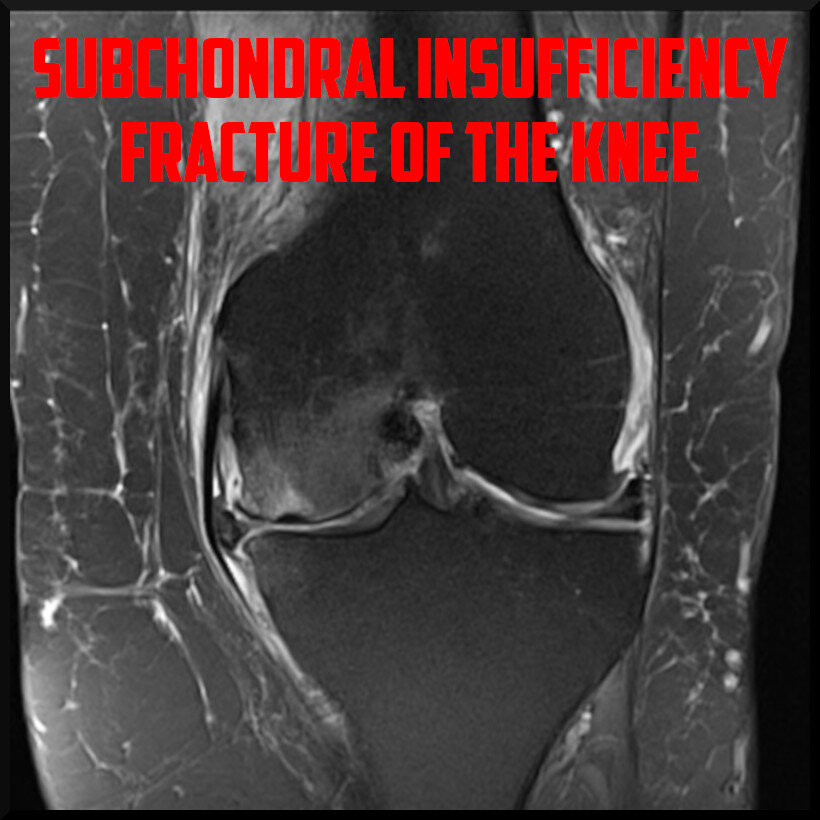 Subchondral Insufficiency Fracture of the Knee

Spontaneous osteonecrosis of the knee (SONK), also called subchondral insufficiency fractures of the knee (SIFK), was first described by Ahlback in 1968 and is a diagnosis that is sometimes overlooked and attributed to knee osteoarthritis [1]. Knee osteoarthritis (OA) is a chronic degenerative disease that leads to loss of articular cartilage, whereas subchondral insufficiency fractures of the knee is an acute disease of the subarticular bone. In the knee joint, impact forces are indirectly transmitted to the bone through the cartilage and menisci.

SIFK, which may be caused by mechanical overloading of the subchondral bone, is probably related to the weakness of the subchondral bone compared with that of the articular cartilage and is often secondary to meniscus extrusion or bone fragility [2]. There is also secondary osteonecrosis of the knee that may be related to other factors such as corticosteroid treatment or sickle cell anemia and there is also a third category called postarthroscopic osteonecrosis. It can lead to subchondral collapse, secondary osteoarthritis, and the need for surgical management.

A 65 year old active female is referred to physical therapy by his primary care provider for insidious onset left medial knee pain. The patient described pain upon awakening one morning around 4 weeks ago. Complaints include progressive knee pain that is worse with weight bearing activities and worse at night. There is slightly limited ROM due to a small effusion. Her past medical history is remarkable for mild osteopenia that is treated with supplemental calcium and vitamin D. She feels that her symptoms are getting worse and she is starting to limp and do less weight bearing activities due to the pain. X-rays of the knee showed preserved joint space with no definitive lesions or signs of osteoarthritis. There was a questionable sclerotic rim lesion over the medial femoral condyle. What is the most likely diagnosis?

Factors predisposing to insufficiency fractures may include meniscal tears or meniscectomy, which can alter the native biomechanics and increase contact pressures and stress concentration on weight bearing areas [4]. More recently, a systematic review showed a strong association between meniscus tears and SIFK [3]. Twenty one of twenty six studies implicated the role of the meniscus in the development of SIFK. This occurred in association with either meniscal tears or meniscectomy. The extent of meniscus extrusion also correlated to the stage and volume of the SIFK lesions [4]. The authors of this review also felt SIFK may not be the most appropriate term due to the proposed etiology not being spontaneous and other studies showing very limited evidence of bone death [5].

SONK or SIFK most commonly occurs in ages fifty or older. There are certain risk factors that have been found that include female sex, cartilage degeneration, low bone mineral density and medial meniscus posterior root tears [3]. Risk factors for progression include lesion size on radiographs, anatomical angle (femorotibial angle) on sagittal MRI and depth on MRI. The anteroposterior knee radiograph can be used to determine the stage of SIFK progression in the medial femoral condyle, which was classified into four stages. Stage one has a normal radiographic appearance but is found on MRI. Stage 2 has the presence of a radiolucent subchondral oval lesion, flattening of the convexity of the condyle or both. Stage 3 shows an expanded radiolucent area surrounded by a sclerotic halo and Stage 4 has apparent secondary OA changes [6].

Size or depth of the lesion on MRI can be calculated as per the bone marrow lesion (BML) grade as part of the MRI Osteoarthritis Knee Score (MOAKS) [7]. The size of the lesion with respect to the total volume of the subregion of the bone involved formed the basis of BML grading. Grade 1 involves less than 33% of the subregional volume, grade 2 involves 33–66% of subregional volume, and grade 3 involves more than 66% of the volume [7]. 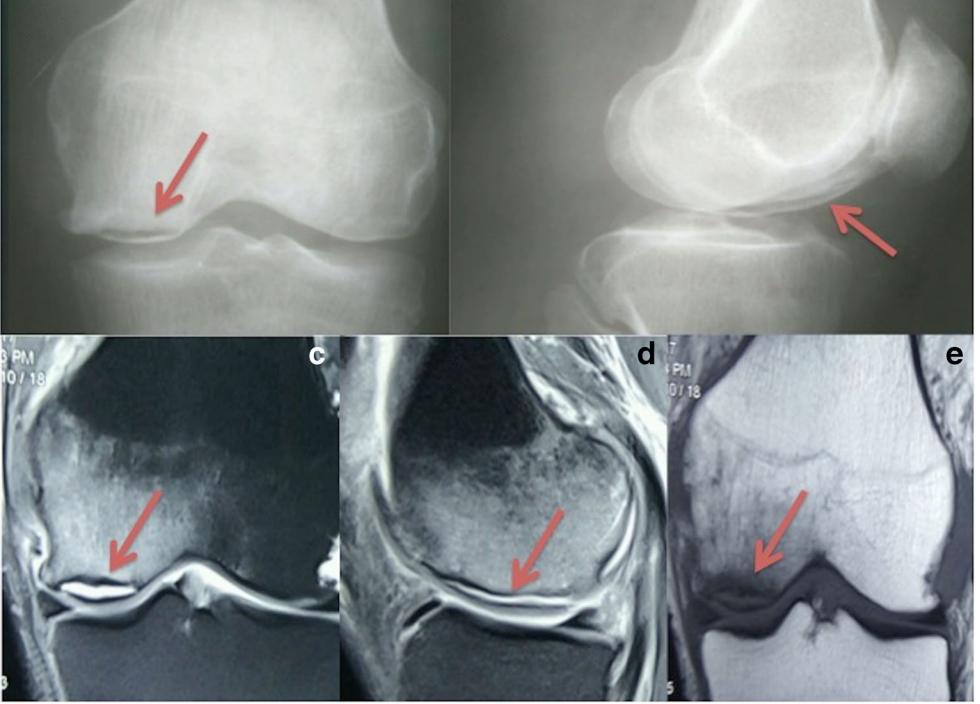 The presentation can vary but most have acute onset, unilateral knee pain. The pain is often severe and localized to one side of the joint, which is the medial aspect in most cases. Lesions of the medial femoral condyle represent up to 94 percent of cases [8]. Some can recall exactly when symptoms began, but trauma is usually not the cause. Pain typically occurs with weightbearing, at rest and seems to be worse at night. Patients may also present deteriorated, asymmetrical gait patterns. Physical examination will usually have localized tenderness to palpation over the affected area or lesion and is the most common finding [8]. Many will have a joint effusion, which may slightly limit range of motion. Ligamentous testing is usually stable or unchanged from prior examinations.
Imaging begins with AP, lateral and oblique radiographs of the knee. The x-ray may not show any lesions depending on the stage. The presence of a radiolucent subchondral oval lesion and flattening of the involved condyles may be seen. Stages were described earlier for stages 3 and 4. If SONK or SIFK is suspected, an MRI can be useful for staging and diagnosis, especially in the early stages. MRI has been proven to be both sensitive and specific [9]. MRI findings usually include bone marrow edema localized to the medial femoral condyle, with extension into the inter-condylar notch. Other lesions on the lateral femoral condyle, medial tibial plateau and patella have also been described. Additionally, a subchondral crescent of a linear focus of low signal intensity can be seen on the T1-, and frequently on the T2-weighted sequences [9]. Concurrent meniscal tears are common and can be diagnosed on MRI [10]. Bone scintigraphy was used in some cases previously, but it very uncommon now with widespread use of MRI.

No algorithm or definite consensus exists for treatment, but most recommendations are based or guided on the extent or severity of the disease or lesion. Nonoperative management is an option for smaller lesions (less than 3.5 cm) or stage 1 or 2 lesions [16]. Non-operative management consists of NSAIDs, protected weight bearing and bisphosphonates. The latest research published in 2018 by Bhatnagar et al. showed excellent results over a period of one year using a combined therapy with NSAIDs and bisphosphonates in a group of ten patients, mainly with stage 1 SONK [17]. Mostly small studies exist for bisphosphonates with both IV and oral bisphosphonates. One study with 17 patients given 70 mg alendronate once a week showed less progression to osteoarthritis compared to a prior study at the same hospital without pharmacologic agents being used [11].

Another observational study with 18 patients given IV bisphosphonate for 3-4 weeks followed by oral alendronate for 6 months that showed improved pain scores at 6 months [12]. One other case series with 28 patients showed improvement in VAS pain scores, improved knee society scores (KSS), and improvement of bone edema on MRI at 6 months [13]. Clinical resolution of symptoms in small lesions was reported to have a mean of 4.8 months with radiographic resolution at a mean of 8 months. The timeframe for the protected weight bearing is not supported by any randomized trials. Most providers will start with a timeframe of 6-12 weeks of protected weightbearing. One prospective study proposed protected weight bearing for 6 weeks and then ambulation assisted with a walking stick for 6 weeks along with a quadriceps and hamstring maintenance program. If no worsening changes occurred with follow up radiographs at 3 months, the patient graduated into full weight bearing. More studies are needed for further guidance on non-operative management.

Table 1. Treatment algorithm used in [17] based on Koshing Staging and BML Grade

Operative management may be utilized depending on size or depth of the lesion or clinical course and is usually reserved for cases with evidence of subchondral collapse (stage 3-4). If a patient does not have subchondral collapse and fails conservative treatment, they may undergo a core decompression and arthroscopy. One observational study by Duany et al. with 15 patients reported an 87% success rate with joint preserving surgery that included core decompression, arthroscopy and autologous graft transfer [14]. Patients with stage 3 and 4 or with lesions greater than 5 cm squared will normally undergo high tibial osteotomy (HTO), a unilateral knee arthroplasty (UKA) or total knee arthroplasty (TKA). A 2018 meta-analysis showed acceptable results for the UKA in terms of VAS and KSS, acceptable survival analysis and a revision rate of 5.51% [15]. If secondary or end stage changes are present, TKA is typically the treatment of choice. 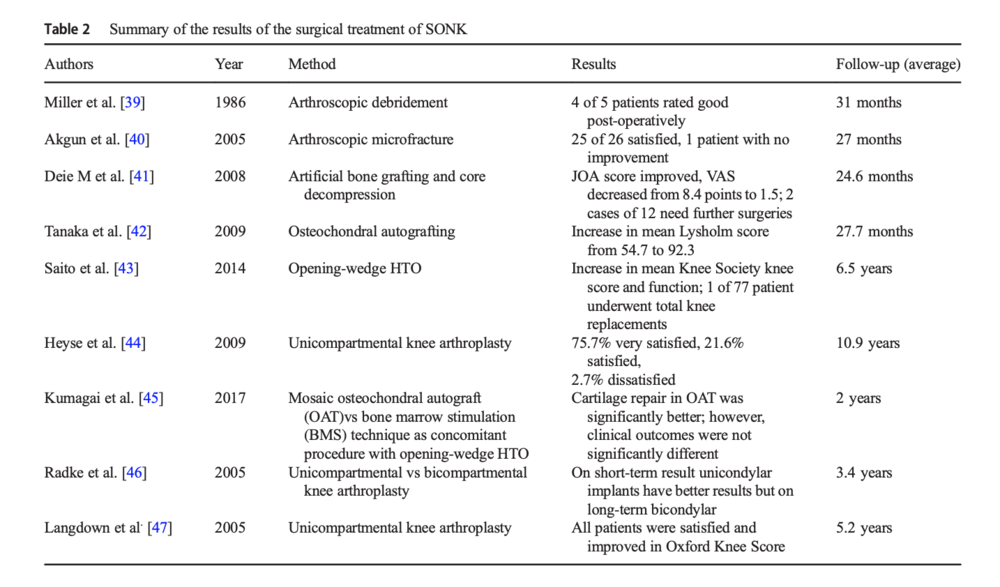 Table 2. Summary of surgical treatments for SIFK (adopted from [18])

In conclusion, spontaneous osteonecrosis of the knee (SONK) typically affects individuals that are age 55 or older and presents with sudden non traumatic unilateral knee pain. More recent studies have shown the etiology most likely attributed to a subchondral insufficiency fracture and proposals have been made to change the name to subchondral insufficiency fracture of the knee (SIFK). Grading can be done with plain radiographs or MRI and staging will likely guide the management of each case. Smaller lesions or lower stage lesions typically respond to non-operative management and more advanced lesions may eventually require knee arthroplasty. Diagnosis is often missed and attributed to early osteoarthritis symptoms and providers must have this on their radar when evaluation knee pain in patients greater than 55.

C is the correct answer. Subchondral insufficiency fracture of the knee typically affects individuals that are 55 or older and presents with sudden non traumatic unilateral knee pain. The pain typically gets worse with weight bearing and at night. Osteoarthritis of the knee would likely have changes present on the radiograph and no sclerotic lesion would be present. Meniscus tears are typically traumatic or have an inciting event and would not present with a sclerotic rim lesion on the x-ray. Transient osteoporosis of the knee can present in a similar manner but more commonly affects the hip and would not have any sclerotic rim lesions over the medial femoral condyle but would have diffuse bone edema on MRI and decreased bone density on a DEXA scan.

Sibilska, Aleksandra, et al. “Spontaneous osteonecrosis of the knee: what do we know so far? A literature review.” International Orthopaedics (2020): 1-7.